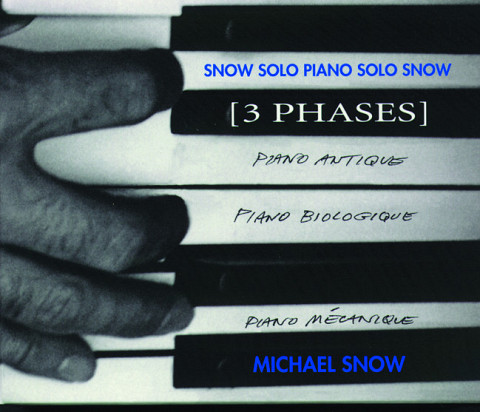 The initial project was to publish a double album, with one disc of Michael Snow improvising on the piano and another of Michael Snow working on a more conceptual approach of the instrument by using a Disklavier. The Disklavier is a standard grand piano fitted with a system that enables an artist to control it via a computer. Hence, the possibility for the artist to conceive sound constructions that are not limited by muscular constraints or by reflexes formed through years of practice on the keyboard. Hence again, the opportunity to transpose shapes or structures from other disciplines into the resonant universe. But, fortunately, the artist had a mind of his own. He convinced us that two disks would not be sufficient, that three would be necessary, because there is also Michael Snow the bluesman and jazzman, without whom the picture would be incomplete. Then, he had us listen, and we had to admit that, sanctified or not, this trinity resolves itself very well into a single box set and a single artist: there is one multi-faceted Michael Snow, whose consistency, while sometimes obscured to our ears by a profusion of languages, remains unshakeable. Michael Snow - 3 phases is thus a three cds set, presenting piano works from this extraordinary artist, accompanied by a 48-page booklet including a text by Raymond Gervais commissionned specially for this publication. A milestone. 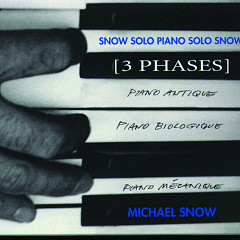 When looking back over jazz history, few musicians have been more celebrated than Duke Ellington. In the years since his passing, scholars pretty well agree on the fact that the Maestro is simply “beyond category". Though some may contend that only the Duke is worthy of such an epithet, there are other artists whose work also transcend stylistic barriers. Of the chosen few here, Toronto’s Michael Snow could also be considered as a category upon himself. While it would be erroneous to compare him to Ellington, save for some reminiscences of early piano masters in his playing, it is now well known that his work also extends into other creative domains, namely, painting, sculpture and, most importantly, film. With a career now spanning a halfcentury, Snow is in many ways more famous for his work in the visual arts field. Not only that, but his wide-ranging oeuvre has been featured in retrospectives all over the world, and critics have readily acknowledged him for his unique artistic vision.

Yet, his fame as a visual artist has always overshadowed the musical side of his persona. Although he has earned some recognition as a founding-member of Toronto’s perennially fluctuating CCMC collective, (where he can be heard on that group’s latest release Accomplices -Victo 063), Snow only offers us glimpses of his considerable pianistic talents in that context. Given the totally democratic, if not anarchistic leanings of the group, Snow melds within the flow of things.

That said, his musical outings are not just restricted to his appearances with the CCMC alone. Over the years, he has performed numerous solo concerts, but only a limited amount of his unaccompanied piano playing has been made readily available to a wider audience. But this situation has now been remedied, and in a most remarkable way, too: thanks to the initiative of Quebec City’s artists’ collective Avatar, a three CD package of solo piano recordings was issued late in 1999. Entitled Michael Snow Solo Piano Solo Snow [3 phases), this release contains three separate jewel boxes within a soft black cardboard box of Snow’s own design and a 50 page booklet with a detailed essay (in French and English) by a long time friend of Snow, Montréal visual artist Raymond Gervais. This document presents the pianist in a number of solo concerts or recording sessions ranging from 1949 to 1998. Considered individually, each of the discs exhibits a distinct facet of the artist’s career, hence the 3 Phases subtitle; when viewed as a whole, this set enables the listener to follow the artist’s development over time, albeit not according to a strict chronology.

The first part of the trilogy is a generous 75 minute side with a mere six cuts to it. Entitled Piano antique, this disc provides us with first hand evidence of Snow’s musical roots. From the outset, one will hear the scratchy grooves of a 78 rpm record, through which the sound of a distorted piano emerges, care of an aspiring twentyyear older grappling with left-handed stride figures. This short item, Mamie’s Blues, (a dedication “in honour of Jelly Roll Morton", as per the liner notes) clocks in at under four minutes. This item does indeed offer anecdotal evidence on the pianists early beginnings, but it also informs us on more recent recordings included in this disc and occasionally to other pieces in the remainder of the set.

And nowhere is the link with the vintage jazz piano tradition more obvious than on the next cut Around Blue. Without hardly a pause following the last distortions of the old shellac side, and transferred here to CD with apparently no digital processing whatsoever, a sudden block chord pops out of the speakers, catching the listener offguard. From thereon, Snow launches into a breathtaking performance of epic proportions. Indeed, Around Blue is a sprawling 45 minute soliloquy, recorded live in 1987 (though its whereabouts seem to be unknown according to the booklet). In it, the pianist proceeds to “play out" his musical autobiography: throughout he teases the blues repeatedly and weaves in some vintage stride patterns as well. But his range of musical invention is wider still, for he toys around with Duke’s Sophisticated Lady in one passage, then veers off into more abstract harmonic territories soon thereafter. But never once does he spin his wheels for too long, and nary is there a dull moment in this outstanding expose of jazz pianisms. What’s more, he eschews any blanket virtuosity or superficial collage techniques, thereby gliding from one place to the next in fresh and even surprising ways. A stream of consciousness it is, yet there is a rigour to his freedom which precludes any aimless noodlings.

Rounding off this first disc are four more items: there are two short vintage early recordings (i. e. the old evergreen Cherry - and Montana in Toronto), which alternate with two more recent tracks (Lynx and Conference). The former, it must be said, alludes to his roots, and in its final moments the music seems to return full circle to where it began.

According to the annotator, the Piano biologique of disc two offers “a totally new approach to improvisation which remvents jazz in its own special way. What we hear is a very physical, nervous, visceral, incarnated Snow. “ To this reviewer, however, it seems that Snow is more busy reinventing himself rather than jazz, a rather heavy handed statement to say the least. This personal exploration clearly appears in the sinuous opening track Rovereto, a 28 minute piece which just about takes up the first half of this side. This “pianistic psychoanalysis" (as stated in the notes, once again) is more of an inner search rather than an external, or purely idiomatic one (as in Around Blue). Also of note in Snow’s style is the use of the high end of the keyboard. Because of that, other pieces on this side (namely Forces of Change and Temperature) achieve a greater sense of urgency. In the former, the pianist challenges our perceptions as well, for he has overdubbed dramatic glissandi in contrary motions, thus creating an illusory virtuosity which is vaguely reminiscent of Conlon Nancarrow’s impossible piano player studies. At eight and a half minutes, the concluding Your thoughts about it, is a 1998 offering, a musing of free associations which ends abruptly in mid-thought as if it were deliberately staged to preclude closure of any kind.

To round off this most remarkable journey, disc three (a. k. a. piano mecanique) can be viewed as a culmination, though not a summation, of all previous materials heard on this set. From the primitive technologies of yesteryear, we are now drawn into state-of-the-art ones. In this 1997 session, Snow is sitting before a Yamaha DisKlavier, a grand piano with an incorporated digital recording apparatus. But there’s an added twist to it as well. Also present in the studio is one Jocelyn Robert, a sound artist/electronics manipulator, and one of the chief instigators of this whole project. On the seven items gracing this 68 minute side, Robert manipulates the pianist’s spontaneously created materials through a computer interface. With his equipment, he may transpose the inputs into different registers and/or overlap these in response to Snow’s own playing. In one instance, the set’s closer edallab indelebile, he even creates a totally new piece out of a single pre-recorded performance. Of the remaining six cuts, the second item, Headline: Bird Mecanique, Arabian Entendu, is a piece quite unlike anything else heard in this set. In essence, it’s a minimalist exploration built on a short riff (the “Bird" connection), but its 5/4 time signature and the use of an Arabian-like scale give it a more oblique character. Over 18 some minutes, the figure is reiterated and shifted to other registers in simultaneously overlapping patterns. By piece’s end, the music returns to its initial single riff, its sequence of notes gradually slowing down to one last resonating tone. Though this piece stands apart from everything in this set, it is not without musical precedent either. Back in 1955, Lennie Tristano recorded his Turkish Mambo, an odd-metered oriental flavoured phrase in seven _ which was submitted to similar overdubbing transformations.

All told, these three discs do enable the listener to hear an artist master_ fully articulating a wellspring of musical ideas. Each disc can be viewed as a discrete stage in an ongoing quest: after we first hear Snow investigating the blues (disc one), he then invests himself into self-expression (disc two) before finally turning his attention to the instrument itself, that great mechanical beast which has challenged performers and marvelled audiences alike. Over the course of his long and distinguished artistic career, Michael Snow has surely struggled with it at times, but he has also succeeded in whipping it into submission. After listening to this document, there will be no doubts left about his consummate artistry. It has been said that genius is the sustained application of intelligence, and such as the case may be, it stands to reason that these three phases are clearly a great work of musical intelligence.