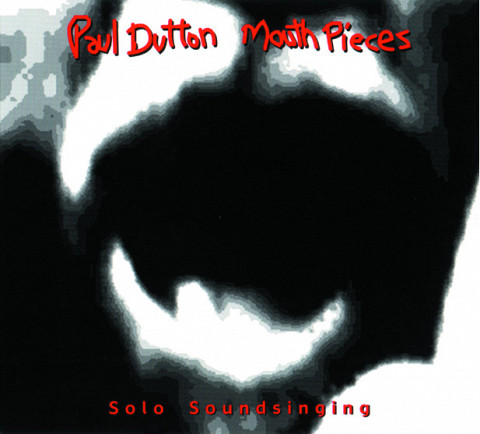 No electronic effects or processing, no feedback, overdubs, or fades. Twenty-one acoustic oral solos, working at the outer reaches of the technical and expressive potential of human utterance, fashioned from sounds, textures, and even a few words.

Paul Dutton’s oral soundworks have placed him at the forefront of sound poetry and free improvisational soundsinging worldwide. He is renowned as a soloist, a member of the CCMC free improv band (1989-present) and The Four Horsemen poetry performance group (1970-88). 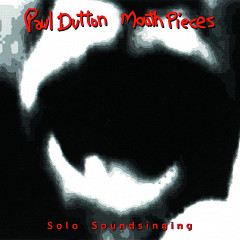 Mouth, tongue, larynx, nasal passages, lungs, and diaphragm — these are the delicate mechanisms that control the most sensitive and unpredictable instrument at our immediate disposal. The inherent difficulties found in mastering the human voice, and in turn, the body, through the differing manifestations of speech, song, and sound, should be self-evident, if not daunting. Few artists are privileged to achieve mastery of this finicky instrument; fewer still are granted the discipline, technical ability, and creative acumen necessary for broad-based innovation in its application.

Canadian soundsinger (his term) Paul Dutton is an exception, and with the recent release of his first solo CD, Mouth Pieces, he takes his righfful place at the forefront of those pushing the very limits of human utterance, while simultaneously redefining the accepted parameters of poetry and music. The duality of Dutton’s achievement, namely, situating his creative practice along the boundaries of two disciplines, is indicative of the dichotomy of his creative process. What might appear on first listening to be a catalogue of vocal effects is, in fact, the very basis of Dutton compositional prowess. By isolating one component of our sound-making apparatus, or simply using a word or a short phrase, he establishes a formal constraint, a position from which he can improvise or construct set pieces, thus analyzing and distilling the subtle nuances of the body’s sonic potential.

The hybridity of Dutton’s æsthetic accomplishments is readily apparent on this CD’s opening track, Reverberations. Framing the words “gong" and “going" with the use of vowel-generated overtones, Dutton crystallizes form and content in a perfectly balanced musical and literary mantra. On track two, entitled /nex, Dutton probes his inhalation and exhalation with nasal rhythm patterns and glottic tonal clusters. Superlative is an apt description of the other nineteen cuts on this CD, which includes a thoughtfuf mix of new improvs and perennial performance favourites, such as Little Sound 1: A Sonnet, Vive le (for Henri Chopin), and Hiding.

Culturally, Dutton’s erudition and technical skills range far and wide, encompassing the musical traditions of the former Soviet republic of Tuva, European sound poetry, and such popular North American genres as jazz, blues, and even C & W. On the track called For The Johnsons, Dutton improvises a fitting tribute to the blues artists Robert Johnson and Blind Willie Johnson. Glissandos, loosely based on a blues triad, are slowly transformed into an anguished howl, clearly reminiscent of the late, great blues musicians’ most expressive works. The rhythmic freedom of improvisational jazz and the natural percussive qualities of language coalesce on Snare, Kick, Rack, and Floor. Fricatives and plosives found in the phrases “combustible compatibility" and “compatible combustibility" are the sole linguistic sources on which this energetic, verbal drum solo is based. By chanting the words “soma haoma," the Avestan language’s name for the sacred mushroom, Dutton creates an outstanding homage to radical British verbovocovisual poet Bob Cobbing on Nod To Bob. Duration and amplitude buttress a tour de force of invention and virtuosity, as Dutton pulls out all the stops in his sonic vocabulary, with vocables, multiphonics, overtones, and speech particles coloured by texture and pitch all stretched to the breaking point, then suddenly resolved in a leisurely, aspirational diminuendo.

It shouid be noted that all the gem-like performances on Mouth Pieces are acoustic, recorded live in the recording studio. No electronic effects, overdubs or fades are used to enhance Dutton’s impressive performative capabilities. The physical demands of such a rigorous constraint should not be dismissed as an act of sheer athleticism, for in challenging himself, Dutton challenges the listener, exceeding expectations and defying categories, while transforming our perceptions and sonic sensibilities with his intelligence, imagination, and extraordinary inventiveness.

Paul Dutton… takes his righfful place at the forefront of those pushing the very limits of human utterance, while simultaneously redefining the accepted parameters of poetry and music.

Mouth Pieces is a superb compilation of acoustic oral soundworks by Paul Dutton. Dutton’s meticulous renderings of these works are cleanly recorded and offer an engaging crosssection of his repertoire. Dutton’s live soundworks are frequendy presented either solo or in the company of other artists and groups including individuals such as Holland’s Jaap Blonk, or groups such as Toronto’s superlative free improv band CCMC, or, the legendary The Four Horsemen poetry perfonnance group (1970-88). Dutton works partly in the tradition of early Dadaists or more recently established pioneers such as Bob Cobbing, and partly in the traditions of Jazz, Blues or Doo Wop, but, he goes beyond all of these precedents to develop his own performative style. This CD, sub-titled Solo Soundsinging traverses the conventional borders of music and poetry to anive at a new auditory frontier. Dunon’s piece Hiding approximately 6 minutes long and printed in colour on the CD itself, is a true masterwork. If you get the opportunity be sure to see Dunon perform this or his other works live. In the meantime, this CD offers a true artistry through jazz changeups, phonetic and resonant phonemics, tongue-pops, mouth percussions, forced-air effects, overtone and pitch modulations, all the more remarkable when you realize that this is all done by human voice only, and without electronic processing of any kind! Paul Dutton soars to sublime heights in this extraordinary soundworks collection.