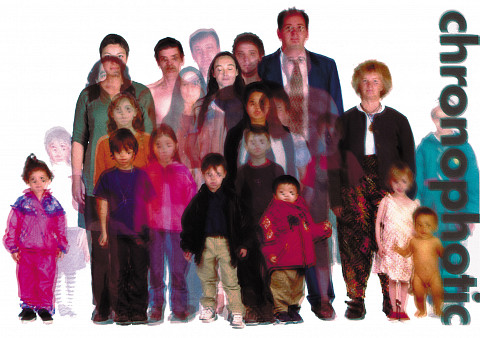 The avoid misunderstandings, the work is not voyeuristic at all, showing human bodies of all ages in their most natural and neutral shape. — Neural, Italy

… the unsaid is as crafted as the said. — Musicworks, Canada 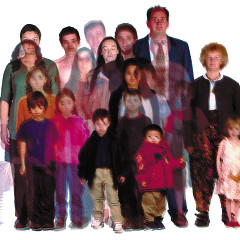 Time-based media art is a generic label applied to all the arts involving time as one of the mandatory coordinates to experience the works. John Oswald involves time at the very center of his own work, making it the hidden fulcrum of the reality he interprets, slowing down or accelerating his own concept of ‘reality.’ In Chronophotic [Arc d’apparition; Whisperfield] there’s an altered immobility reflected in the continuos almost perceptible changes that very slowly add persons to a sort of group picture, shifting, also slowly their dressed/naked image. The nakedness and the being dressed can be seen as two faces of the same reality, the public/private, the official/intimate, the endlessly alterable/the given one. The avoid misunderstandings, the work is not voyeuristic at all, showing human bodies of all ages in their most natural and neutral shape. Furthermore it simply seem to question our conventional daily perspective and the time we spend observing and relating to other humans. It’s an ancestral species’ issue: dealing with our own essence and our own temporal and instinctually mutual recognition.

The avoid misunderstandings, the work is not voyeuristic at all, showing human bodies of all ages in their most natural and neutral shape.

The current obsession with communication at the speed of light has engendered and been fueled by digital media. While analogue media may compel us to slow down and look a second time, digital media don’t have to preclude a sustained gaze. John Oswald’s Chronophotic is a two disc DVD - CD set that gives us ample time to decelerate. In the feature-length DVD-V, Arc d’apparition, standing figures fade in and out, clothed and unclothed, overlapping each other in a group. Against a white ground,the appearance and disappearance of figures and clothing occurs at a glacial pace. It’s not just that we can view without being viewed but that we can view at leisure. Images of others fascinate because they promise, because they are us, and because they never fulfil. At their most transparent they remain unknowable.

There are over a hundred years of photographic portrait typologies, including those of Alphonse Bertillon, August Sander, Rineke Dijkstra, and Arnaud Maggs. As in any of these typologies, in Oswald’s Arc d’apparition, the addition of each new figure shifts the average in the direction of the addition. But in a world that recognizes the lack of any centre or Cartesian grid against which everyone can be measured, an exhaustive taxonomy becomes impossible and any attempt at classification becomes potentially distasteful. In Oswald’s piece the differences between the various figures are uniform.

The accompanying one-hour CD, Whisperfield, is a barely audible, multilingual, and metalinguistic layering of voices. Occasionally legible, hushed spoken fragments are intercut with silence, overlayed with each other and the singing of wild birds. Numerous layers obscure each other, and what is communicated is communicability. The result is a pure and transparent language in which the pitting of the expressible against the inexpressible is at once made present and disarmed. If you’re interested in learning the secret language of birds, don’t let your attention stray.

In the transparent figures of Arc d’apparition all seems to be revealed, and in the overlayed voices of Whisperfield all seems to be concealed, but it’s easy to forget that revelation and concealment are always inseperable from each other.

In Oswald’s Chronophotic, the unsaid is as crafted as the said.

… the unsaid is as crafted as the said.