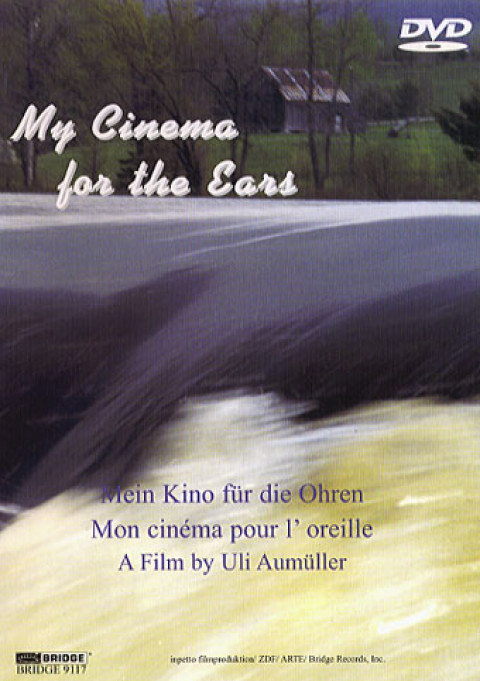 … this art/documentary film is memorable and worth having. — Audiophile Audition, USA

My Cinema for the Ears is a 59-minute film by Uli Aumüller. An impressionistic, wryly humorous look at nature and the creative process, the film features composers Francis Dhomont and Paul Lansky and follows their search for an art, that emanates from their surroundings.

This disc includes the film My Cinema for the Ears — The musique concrète of Francis Dhomont and Paul Lansky — in French and English with optional French, German, and English subtitles — which includes the commissioned composition Un autre Printemps by Francis Dhomont and visualized by the video artist Robert Darroll, and four audio tracks: Dhomont’s En cuerdas and Lansky’s Night Traffic, Table’s Clear, and Idle Chatter Junior. 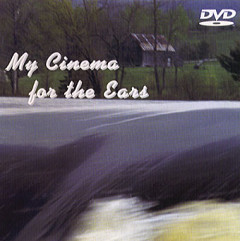 Electroacoustic music or musique concrète as it was conceived by Pierre Schaeffer has no visual aspects as it usually only comes out of loudspeakers. At the same time, most of the composers of musique concrète do not use sounds that are related to narrative structures. So you won’t often hear sounds whose origins could easily be recognized, such as a bird singing, a bell ringing or wind whistling. Composers generally prefer the more abstract qualities of sounds, so that listeners will focus their attention on their musical aspects, rather than the stories they might tell.

When I decided to make a film about electroacoustic music, I was explicitly looking for composers who use sounds that are recognizable and refer to a visual reality. In my film I wanted to show the visual origin of a sound alongside its purely acoustical qualities, just as I have in my other films where one sees musicians playing their music.

One of the first composers I thought of was Antonio Vivaldi (1678-1741) who imitated natural sounds with classical instruments in a way that mediated the differences between their natural (referential) and musical (abstract) qualities. The famous barking dog in the second movement of Vivaldi’s Spring Concerto, for instance, is more a musical figure — a basso continuo line — than a literal attempt to imitate an animal. Those who know may discover a dog within the viola line, but it’s more a dog singing than a viola barking, even when the musicians try their best to imitate the natural sounds. The same applies to water murmuring, birds singing, thunder and so on...

From the very beginning of musical history, composers have played with the ambiguity of the abstract and the absolute. I was curious to know how a contemporary composer with modern technical equipment might handle the same sounds Vivaldi wrote about in the didactic poems which he attached to his scores.

After listening to a large pile of compact discs, my choice fell upon the work of Francis Dhomont, who was influenced by the Pierre Schaeffer school. Dhomont follows a dream-like aesthetic, where fragments of (acoustic) reality sometimes appear for a few seconds, only to dissolve and quickly vanish. He takes recorded sounds as raw materials and uses the vast possibilities of electronic manipulation to travel with them to unknown islands, where these materials were nothing other than starting points. But Dhomont also travels within the sounds, turning their insides out onto the surface.

Once Francis Dhomont not only agreed to compose Un autre printemps (An Other Spring), but also agreed to be filmed during his compositional process, I spent a couple of weeks in Canada looking for locations that might match the landscapes Vivaldi had written about. I took nearly 1000 pictures of the beautiful Canadian landscape, searched in vain for goats and the dogs who accompany them (I found some sheep, but no shepherds), and discovered, more by chance than systematically, that the process of looking deeply inside a sound (where its qualities become more abstractly musical) could be echoed photographically by getting extremely close to a given object. The closer I got, the more my attention was drawn to the object’s mathematical proportions, the changes of light and shadow, the tiny differences of the surface and its colours. Here were the infinite variety of created forms and structures which one rarely takes notice of in everyday life. Those pictures suddenly appeared with an overwhelming beauty I’d never seen before, and I asked myself (and Francis Dhomont) just what it is that determines how one structure is beautiful and another is not. Was it my imagination, or was I following certain patterns I’ve always had in my brain, or learned in my childhood? Was the beauty created by my sense of fantasy? Or if not, was this beauty waiting for me, within a river, or in the structure of a rock, or on the surface of a lake, for hundreds of years, until a pair of ears or eyes might have the joy of beholding it?

We did not find an answer to that eternal question ‘Where does beauty come from?’. But we did discover that beauty might be found in almost any sound or object — depending on how long and in what manner one wanted to search for it, and how open one’s mind was to discovering it.

The other thing we found was a structure for our film (which was “our” film by then). It begins with “real” objects — landscapes, water, trees, villages, towns etc., and then the sounds and images move closer and closer, so that we might enter more deeply into the reality of existing things. Francis Dhomont took parts of Vivaldi’s music, the sounds of nature and some selected viola sounds and made his music from them — and I gave my footage with our close-ups to the video artist Robert Darroll to make a “musique concrète visuelle” out of it. In the end, the film is about an audio-visual creative process.

The second living composer who entered the stage was Paul Lansky. Some of Lansky’s works use the rhythmic framework of minimal music, though his use of random elements separates his music from easy predictability. When I heard Lansky’s music for the first time (above all Table’s Clear and Idle Chatter), I immediately had pictures in my head, his music evoking the inherent structure of the moving pictures of film or video.

Paul Lansky’s composing methods are quite the opposite of those that are used by Francis Dhomont. Lansky layers his sounds on pre-existing musical structures, creating, for instance, a Gamelan orchestra with kitchen instruments, while Dhomont peers inside the structure of sound and tries to find compositional form on the basis of what the sound offers him.

I enjoyed observing that two composers so similar in one aspect of their work (balancing the narrative and abstract), could at the same time occupy such completely different worlds. I wanted them to explain to each other how they achieved such different results using virtually the same raw materials. If you listen carefully to the discussions of Lansky and Dhomont that are part of this film, you’ll hear that they sometimes use the same words, but with slightly different meanings — and I think that these differences explain more than a hundred books and analyses might.

Above all, I want to say thank you to Francis Dhomont and Paul Lansky — for their confidence and patience (and love) — without which a film like this could never have been made.