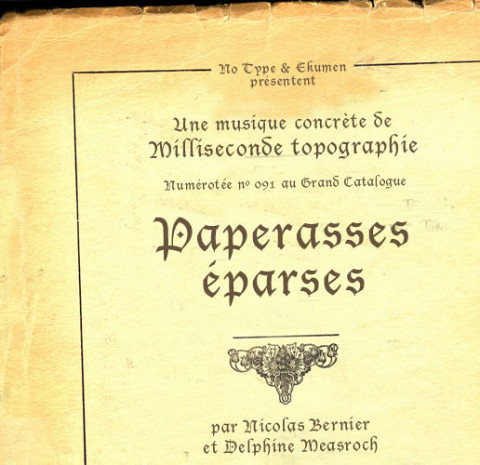 The skillful blending of acoustic and electronic sounds and spectral melodies will leave you hoping to hear more from this talented duo. — Earlabs, Netherlands

Mini-CD-R version of the No Type web album web. 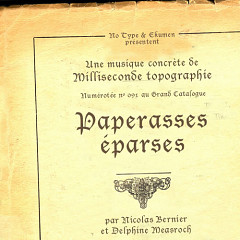 Paperasses éparses (Scattered paperworks) is the first net label release by Montréal-based musicians Nicolas Bernier and Delphine Measroch. They have been working together since 2004, previously collaborating on installations and ‘video-music’ (excerpts of which can be found via their website at www.ekumen.com. This particular release is under the moniker Milliseconde topographie — a name which emphasizes the attention to detail manifested in their work.

Both Paperasses éparses and Pays de contraste are replete with acoustic and electronic instruments. Paperasses éparses begins with a single bowed sound that is rapidly joined by several guitar melodies, dulled percussive sounds, rattles, scratches and other noises. Soon it thins out once again, leaving behind only a few of the instruments under which a hushed voice whispers closely in your ear. This subtle flow continues, increasing and decreasing like a sudden rainstorm in the summer, slowly reducing to minute clicks and slight sweeping.

Pays de contraste is slightly more sparse, the guitar and bowed strings fade off and are replaced with piano and brass. There are more noises and percussive elements and electronic tones. Also predominant is the satisfying sound of something being wound-up which occupies a large part of the track. The dirge-like brass and piano melodies interact behind the rustling, alternately peaking out and receding again. The tracks tapers out softly as the mysterious winding sound is revealed to be a music box that plays a soft cluster of plucked notes as the track ends.

Milliseconde topographie’s Paperasses éparses is a fascinating and hypnotic work. The skillful blending of acoustic and electronic sounds and spectral melodies will leave you hoping to hear more from this talented duo.

The skillful blending of acoustic and electronic sounds and spectral melodies will leave you hoping to hear more from this talented duo.