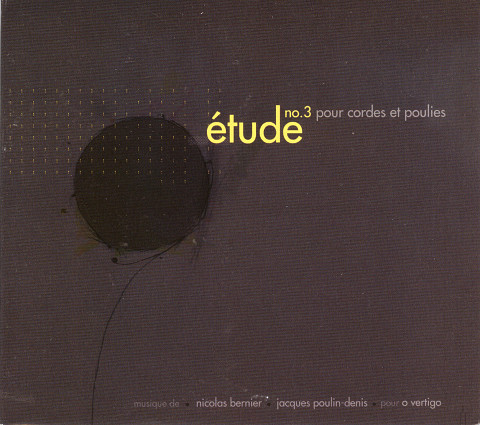 For us, electroacoustic music is as relevant to dance as instrumental music, if not more. — Surgery Radio, Canada 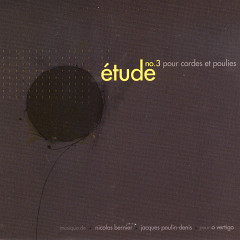 The music of Étude no 3 pour cordes et poulies reveals itself as a metaphor of what is imperceptible in human thought. It explores the mind’s desire to raise the sails and its propensity to vanish while always constrained to the physicality of the body, forced to remain earthbound and rational.

To listen to Étude no 3 pour cordes et poulies, is to stand in the belly of a ship, on the edge of a pier, or in a train watching the landscapes pass by. The object of the project was to create new places, meta sound environments that emerge from many landscapes brought together in music. Fascinated by soundscapes, the intention of the composers is not merely to contemplate or document these as ecological occurrences, but to fully integrate and impart them with an earnest role in the musical composition. To them, a field recording is an ideal material to articulate music.

“Cordes” being the French word for rope or string, the initial version of this music focused on stringed instruments such as guitars, violins and cello. As the project evolved, the composers gradually moved away from these, keeping only their essence and artifacts, their melodic and harmonic structures, and musical textures. Wanting to create music that is more allegorical, these instruments were replaces with real ropes and rigging, pulleys and other unusual objects.

The result is a combination of electronic music and soundscapes that create a deeply immersive environment. Through its tableaus, it is possible to distinguish the reminiscence of a music that was once instrumental, depicting the boundless and the tumultuous nature of human thought.

This music was composed by Nicolas Bernier and Jacques Poulin-Denis for the choreography Étude no 3 pour cordes et poulies by O Vertigo.

The worlds of electroacoustic composition and dance are not ones that most people would expect to overlap… what circumstances bring them together here? Why do you think they fit?

For us, electroacoustic music is as relevant to dance as instrumental music, if not more. Music is music. Electroacoustic music can offer a lot of space, where instrumental music can be more independant and stand alone. This quality, the aptness for ambience, is appealing for choreographers who are looking to encompass their visual work with a supportive soundscape. The fundamental link that unites music and dance is movement. Music is movement. Dance and Electroacoustic music are the composition of gestures that exist in time and space and become meaningful when being shown and heard. Thus, the wonderful union.

Unlike many electroacoustic works these pieces have definite melodic and harmonic elements that move things along besides the acousmatic sound elements… is this more indicative of how the music is being used as an accompaniment to movement, or is it a primary aesthetic choice in itself?

The use of tonic sounds (notes) is definitely intentional, almost even a STATEMENT. Electroacoustic music went through a period of total rupture with music from the past, but we don’t believe in this detachment. Our music is the result of many influences including instrumental melody and harmony. The other reason why you will find tonic sounds in our music is that we use a lot of musical instruments as source material in our music. Electroacoustic music is about timbre and sonority, but for us the most beautiful timbres are often those of instruments that were made to be musical. All other found sounds, only widen timbral possibilities and add a level of allusion.

Outside of the academic world it usually is associated with the general public often has difficulty grasping the concepts at play in electroacoustic music… do you believe there is a strength/purity in this distance from “pop culture” or is it too self-enclosed?

This is a BIG question that points to many things. We don’t really identify with genres, but believe they are important. Even if it’s not obvious in the music, these labels have a heavy influence on music. The Academics do research that always influence at a certain point in time pop music, just like pop music has always influenced “academic music”. We only have to think of the loop now dominant in pop music, but discovered in a radio research studio. Personally we are very influenced by pop music. It’s difficult not to be!

Do we believe in distance from pop culture? We believe in the quality of arts and research. That which aspires to bring music-creation further than pop music does. We believe in the purity of elctroacoustic music, close to being the only type of music solely based on LISTENING and not on performance. You have to be a REAL music fan to listen to this type of music because the concept of performance is kept irrelevant. We don’t believe in the confinement of Electroacoustic music. If we want to understand the world that surrounds us, we have to be able to dialogue with others who constitute it. Academicians would gain by attending more pop music concerts, and that pop culture (also secluded in its own world, even if the mass is larger) should experience more research-based art. Wouldn’t that be wonderful!?!?

The Ekumen collective supports creativity across different art forms, primarily in digital media… do you think it’s possible for creative groups to flourish exclusively online or is an extension into the real world also necessary? What are difficulties you’ve faced when exposing your works to a greater audience?

It’s possible for a collective to flourish solely through the internet… but how awfully boring! The reason behind Ekumen is to show that we are not just artists trapped in front of their machines. We also collaborate amongst ourselves, amongst humans.

Again, for a better world, human communication, physical communication is essential. Our work only begins to make sense when exposed in the REAL life, meeting REAL people, and not when we meander through the web.

For us, electroacoustic music is as relevant to dance as instrumental music, if not more.

Created as a sonic accompaniment for the dance troupe O Vertigo, Étude no 3 pour cordes et poulies is a recording that steps lightly on its own two feet. Creators Bernier and Poulin-Denis are multidisciplinary artists who crossed paths via their studies of electroacoustic composition at the University of Montréal. Poulin-Denis’s previous training as a dancer and actor doubtlessly led to this specific collaboration. The two have achieved something rare and wonderful: music that has the precision, inner life and depth of field inherent to accomplished electroacoustic work but with a ghostly breath of melody giving it lift and lightness. The electronic elements elicit comparisons to the detailed works of Alva Noto or Ryoji Ikeda but they are only the gears and hinges of a much larger and more delicate machine. Nothing is ever still. Brushed drums shoot right-to-left like chain lightning, voices pop out like snippets of captured radio broadcasts while ticks and chimes well up like a wall of music boxes yet nothing ever seems overwrought or crowded. Bernier’s website / label / micro-community Ekumen is one to keep an eye and/or ear on in the nights to come.

… music that has the precision, inner life and depth of field inherent to accomplished electroacoustic work…

Back in Vital Weekly 559 I introduced the Ekumen label, through a bunch of highly limited CDr releases. Much surprised I am now by seeing their first real CD release, by Nicolas Bernier and Jacques Poulin-Denis, who also made their mark on a compilation MP3 by the label. Étude no 3 pour cordes et poulies was created for a choreography by Ginette Laurin. Although there is no such indication, I think the two are laptop boys, despite the fact that we hear acoustic instruments such as a cello. Maybe of them plays it, but in all the digital processing that goes on it’s hard to believe that it’s just one laptop. So me thinks its sound file playback from a computer. Not that it really matters I think, since the music is very vibrant and lively. Things are in constant flux and movement in a live improvised acousmatic manner. The processing as such sound very much like that of the composers on empreintes DIGITALes but at the same time there is also a lot of improvised stuff going on. Occasionally they reach for the beat such as in Cor, in which everything falls into rhythmic groove of minimalist electronica. Throughout this is a very vibrant CD, with lots of ideas thrown about, but that makes perfect listening sense. We could now wonder what they dance looked like.

… the music is very vibrant and lively.