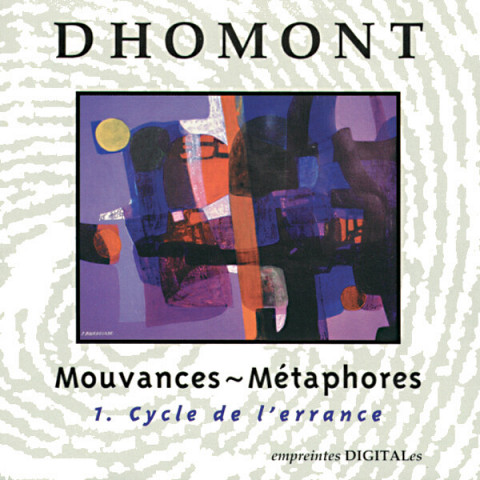 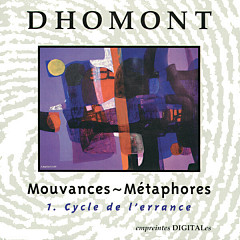 What is immediately attractive about Francis Dhomont, fortunately, apart from appearances, is that he posses nothing of the Cloven Viscount, the Italo Calvino hero whose two halves, misfortune and kindness, scatter along the way loss mixed with consolation. If that story has a happy ending — where, after a duel, both halves of the mini viscounts re-emerge as one reharmonized entity — and if this fable comes to mind at this moment it is because of a profound tendency towards this dichotomy characteristic of today’s composers, to which some do not escape, either by perverted coquetry — slandering and vituperating contemporary art while being in it themselves — or by naive proselytism — discrediting their work by making an irremediable gap between the ambition of their discourse and the aesthetical result.

In the case of Francis Dhomont, the process is out of the ordinary. We have with him the interesting double union of a composer whose work is constant with consistent quality, varied but with unity of style, colored but with great coherence. And, as a bonus, he is a teacher who produces numerous quality good students, devoted to listening to others and thinking about their discourse, a constant mover and continuous analyst of the theories of an art which remains experimental, who encourages an art allowing as much musical as human exploration, both abundant qualities of this composer.

The term acousmatic appears frequently in the texts of this book. Yet, what does it mean?

An English neologism, which comes from the French acousmatique, has its origins with Pythagoras (6th century BC) who was (it is said) delivering his — uniquely oral — teaching behind a curtain to prevent his physical presence from distracting his disciples, allowing them to better concentrate exclusively on the content of his message.

Closer in time to us, at the beginning of this century, one finds in the two-volume French dictionary Le Larousse pour tous:

Acousmate
n. (from the Greek Akousma, what is heard). Imaginary sound, or of which the cause is not seen.

In 1955, the writer and poet Jérôme Peignot, at the beginning of musique concrète, used the adjective acousmatic, meaning ‘a sound that we can hear without knowing its cause’, to designate “the distance that separates a sound from its origins” by obscuring behind the impassivity of the loudspeaker any visual element that may be connected to it. In 1966, Pierre Schaeffer mused about giving his Traité des objets musicaux (Treatise on Musical Objects) the title “Traité d’acousmatique” (Treatise on Acousmatic). Finally, around 1974, to mark the difference and to avoid any confusion with incidental or transformed musical instruments (ondes Martenot, electric guitars, synthesizers, real-time digital audio systems…), François Bayle introduced the expression acousmatic music as a specific kind of music, as the art of projected sounds which is “shot and developed in the studio, projected in halls, like cinema.”

It is true that over the past twenty years, under the term electroacoustics there has been a proliferation of sound pieces which have little in relation to each other except a common use of electricity. It was therefore important to affirm, with precise terminology, æsthetic choices, a body of thought, and a language. It is also in this spirit that, since 1989, the Rencontres acousmatiques (Acousmatic Meetings) of composers in the south of France have been organized.

Thus, this music — or better: Acousmatic Art (Denis Dufour) — was conceived from its beginnings to be heard without the use of visual intervention. It does not involve any instrumentalist on stage — with the exception of the person who projects the work during a public performance in order to maximize the use of the given space. It organizes morphologies and sonic spectra, “images of sound” (François Bayle), coming from a multiplicity of sources, but that the absence of visual identification makes anonymous, unifies and prompts a more attentive listening. (Is it by pure coincidence that the hearing of blind people is reputed to be so refined?)

It follows its very own mechanisms that, due to their newness, require coherence and intuition. It is a causa mentale. Finally, it sets or fixes onto a medium (magnetic tape, computer disk or other) with precision and no maybes, the most subtle nuances chosen by the composer: what we hear doesn’t resemble what is wanted, it is what is wanted. This last point is very well presented by Michel Chion in his recent book, L’art des sons fixés, ou la musique concrètement (The Art of Fixed Sounds, or Music in Concrete Terms).

Further, let’s stress a fact that remains underrated. If music has always been closely associated with its reproduction by performers, as opposed to many other art forms that are once and for all fixed on a medium (painting, literature, cinema, video…), it is due to the impossibility to do so differently, and not by choice. Never before, until this day, could one capture, keep, and reproduce a faithful image of sound phenomena. Before it was necessary to use a more or less precise symbolic notation to capture the ideas of composers. This gave birth to a quasi-universal practice that we have no reason to complain about or tire of.

However, this situation is neither a fatality nor a law since today we know how to fix sound as we do for visual images or text. To pretend the opposite is only to rely on habit and on the largely publicized fetichism of the performer.

Acousmatic, the art of a century that prevents the disappearance of sound, is a new and autonomous art form which certainly finds in the compact disc — a genuine sound book — one of its most convincing vehicles. The seven works brought together here belong to this reality, still young but already engaged in the next millennium.

This acousmatic triptych recounts the Journey and some of its symbolic projections (escape, love, flight, space, the limit of disappearance, the loss of oneself) while merging natural images with pure abstractions; metaphors of a metaphor, since in music any tale is inherently a transposition.

The composition of these three works spans a period of eight years; already, this suggests for me that the act of wandering both in its proper and figurative meanings — movement, change, mobility, roving dreams, upheaval, and revivals — all weave the very material of life itself.

There are thus three sections to this Cycle begun in late 1981 with Points de fuite (Vanishing Points), for which … mourir un peu (… dying a little, 1984) is an extended commentary in nine movements and Espace / Escape (a bilingual anagram — ‘espace’ being French for ‘space’) (1989) is the final outcome definitively exploring spatial preoccupations.

These last two works draw some of their material from Points de fuite, a communal well. This is perceptible particularly in the fourth movement of … mourir un peu, its longest section, 4. Thème de la fuite (Theme of Flight) which is both a large scale reprise-variation of Points de fuite as well as the central axis for the eight other movements.

Under the title Mouvances~Métaphores (Mobility~Metaphors), seven works are united around the common theme of movement as with virtual displacement of sound in geometric space, or metaphorical transferences of meaning into the realms of imagination.

As before, I wanted to offer the most interesting, precise and complete document possible. The most beautiful as well.

As before, we find photos, an introduction by a privileged observer, and a presentation and program notes by the composer on his work.

As usual, it is in French, and in English.

But, this one isn’t exactly like the others. It’s somewhat different; it’s a little more. It is for Francis Dhomont: to mark an hard to believe 65th birthday; to underline a multiplicity of activities whose repercussions link generations, passions, creations, the displacement of sounds, people, even continents; to resonate the uniqueness of the work.

Therefore we trace his trajectory, his paths; we put him in perspective. To better grasp, better know. We listen and listen again to the pieces, energize them, burst them open for the discs.

We… the magical complicity of Robert Normandeau, the curiosity of François Guérin with the generosity of Laurie Radford and Claude Schryer.

We, also… the enthusiasm of Konrad Boehmer from BVHAAST and François Bayle of Ina-GRM, the support of the Canada Council [for the Arts].

Les dérives du signe (The Drift of the Sign)

Mobility here is that of quicksand. One believes one holds the image but it sifts between the fingers, or allows itself to be covered, engulfed by a new image closing in upon it.

Ubiquity and ambiguity of signs inform us and lead us astray.

These four works play with diversion. The diversion: of musical discourse in Novars, of sound sources in Chiaroscuro, of sensory perception (synesthesia) in Météores (Meteors), and of nature in Signé Dionysos.

Under the title Mouvances~Métaphores (Mobility~Metaphors), seven works are united around the common theme of movement as with virtual displacement of sound in geometric space, or metaphorical transferences of meaning into the realms of imagination.