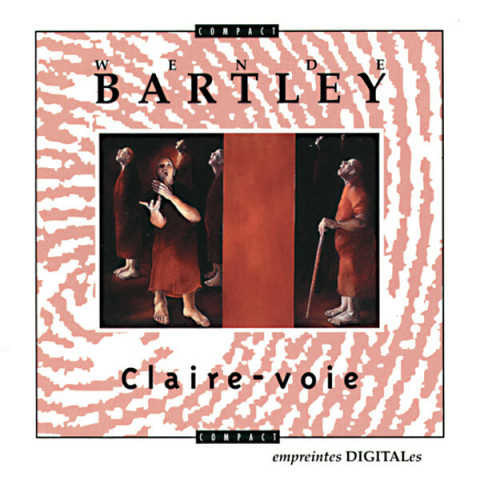 You have never heard anything like this. I mean that. — Splendid E-Zine, USA 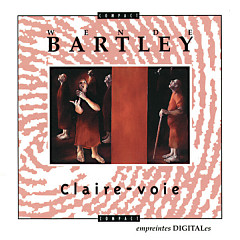 [Openwork — Letting the Light Through]

For the composer, the title of the CD Claire-voie means “Letting the Light Through”. It also serves as a root for the notion of clairvoyance, the expansion of sensory perception. In French there is a play on the word “voie” which also sounds as “voix” or voice. All four works on this CD incorporate the notion of voice, exploring images important in the collective story of woman, developing new sonic boundaries while giving voice to women’s cultural experience. These works attempt to bring forward — to bring to light — a new consciousness of woman’s power, expressed in sonic metaphor.

Wende Bartley has worked alone and creatively in the electroacoustic field. This Toronto-based composer here presents pieces composed for female voice and tape. Composed from 1985-1993 these four pieces explore the ‘chthonic,’ mysterious aspects of the female psyche centered on phases of the moon. Mezzo-soprano Fides Krucker features prominently on Ellipsis singing, wailing and summoning the spirits of Selene. Haunting and otherworldly, Bartley’s is a ballet for lithe shadowy figures emerging from the mist. Further shrouded in disembodied voices caught on the tape, the sisterhood spins slowly in moonlit ancestral worship. (4.5/5)

You have never heard anything like this. I mean that. On first listen, Ellipsis and Rising Tides of Generations Lost may remind one of the emotionally unsettling Diamanda Galas recordings of the late eighties. Imagine being left in the basement of the Amityville house with a box of wet matches and you have an approximation of Claire-voie’s atmosphere of unease. There is a bleak austerity to these pieces, composed of a foreboding soprano accompanied by stray sounds, rustling percussion and ghostly synthesizers. Wende Bartley’s Claire-voie is a siren song not meant for the faint hearted.

You have never heard anything like this. I mean that.

Claire-voie brings together four electroacoustic pieces by Wende Bartley, composed between 1985-1993. The work is characterized by Bartley’s dense texturing of instrumental, vocal, and recorded environmental sounds, as well as her exploration of the performing potential of the female voice. It is powerful and evocative work.

Ellipsis (1989-93, 14:31) is a work for female singer and tape. Sung by mezzo-soprano Fides Krucker, this piece explores extended vocal techniques such as multiphonics, glottal stops and vocal fry, in a tripartite structure associated with the lunar phases and chronicling a three-fold story of women’s collective unconscious, which Bartley terms “The Age of Darkness,” “Creating a New Space,” and “The Age of Resonance.” (see also Hannah Bosma’s description of the piece in 1995 International Computer Music Conference Proceedings, pp. 141-142).

The second piece, Rising Tides of Generations Lost (1985-93, 15:01), is my current favourite on the CD. It starts with whispered vowels, consonants, and syllables, moving through to spoken words and finally longer phrases that are almost buried, yet rise again through the fires that tortured and silenced women. In her description of the piece, Bartley quotes American novelist Kate Chopin: “this ‘beginning of things’ is ‘vague, tangled, chaotic, and exceedingly disturbing. How few of us ever emerge from such beginning. How many souls perish in its tumult.” Disturbing as it is, I always feel hopeful and energized as strong voices emerge clearly at the end.

Ocean of Ages Revealed (1991, 13:21) explores the gestures of Balkan vocal music, as well as other sources, through the PODX granular synthesis system developed by Barry Truax at Simon Fraser University. This process allows composers to expand and stretch the sounds to reveal microscopic shifts and changes in a slow-moving tapestry. The piece is based on a visual image by Susan Griffin, in which we travel into the darkness of a cave, seeing images of another time etched into the walls.

The last piece, IceBreak (1992, 14:22) evokes the world of ice melting, dissolving and transforming into water, moving through “states of rupture, isolation, introspection, passion, and infusion.” It is made of textures created from short improvisations on instruments from the Kyai Madu Sari, the Javanese court-style gamelan. The textures form rhythmic and melodic streams that echo through sound-space.

I find in Bartley’s music a source of spiritual energy and feminist consciousness that is matched by musical and technical diversity and depth. I listen to this CD often.

It is powerful and evocative work.

Three pieces constitute this CD — all work from the mid-to-late 80’s. All very electronic and similar in character. Very listenable stretches of texture landscapes separated by short, swishy intervals of tape effects. Compositions evolve in ways that are appreciable even on a “passive listening” level. Reminiscent of Christian Zanési’s GRM LP, or Christian Clozier’s Quasars CD.

Yet another compelling release from [empreintes DIGITALes] in their “affordable” series. Bartley is based in Toronto and has been involved with electroacoustic sounds for over ten years. This CD contains compositions spanning her career and is characterized by spacious, slightly icy, and ethereal works. Two of the pieces use vocal sources to solid, but differing effects. The intensity (without the drama) of the other two pieces is something we could hear more of in a genre that often overemphasizes “dramatic” sounds.

Wende Bartley has worked lone and creatively in the electroacoustic field. This Toronto-based composer here presents pieces composed for female voice and tape. Composed from 1985-1993 these four pieces explore the chthonic, mysterious aspects of the female psyche centered on phases of the moon. Mezzo-soprano Fides Krucker features prominently on Ellipsis singing, wailing and summoning the spirits of Selene. Haunting and otherworldly, Bartley’s is a ballet for lite shadowy figures emerging from the mist. Further shrouded in disembodied voices caught on the tape, the sisterhood spins slowly in moonlit ancestral worship. (4.5/5)

… a ballet for lite shadowy figures emerging from the mist.