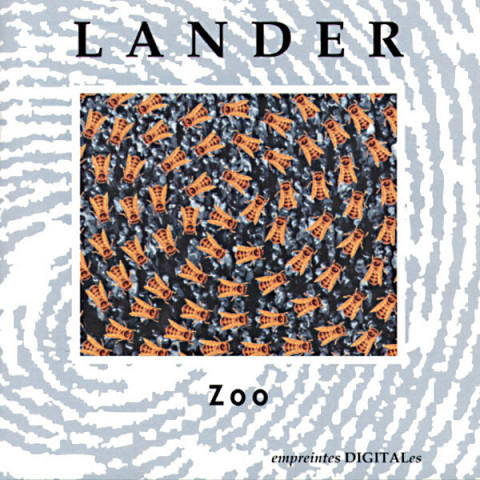 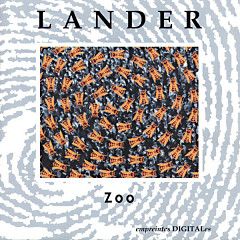 Dan Lander is mischievous with his tools, you can hear him grin at several points throughout these recordings. His approach has a sense of play and naturalness that one rarely hears. These are works sans woosh, bare, sometimes painful and always passionate, as in works with intelligence, precision and guts. Lander has had several lives — photojournalist, truck driver, video maker, gorillagramme, drummer, performance artist, amongst others — all of which instill his audio work with a maturity of content, an economy of form, an immediacy of bareness.

This release follows Lander chronologically, begining with a treatment of the mass, or lack thereof, of radio in the work Talking to a Loudspeaker. The calling of ‘Mister Speaker,’ the variations on broadcast quality and the snicker at our phobia with dead air, are classic moments in the freshly inaugurated pantheon of radio art classics. With a keen ear for the incision, Lander takes your radio, sets it on its back and takes its components apart. When you get it back in one piece, you end up not sure if you want it to work anymore.

The writing in sound that Lander performs is deceptively simple, and yet, it does not lack in subtlety. In Destroy: Information Only, Lander rewrites — at the time of his back injury — his body as it writhed in pain through the anecdotes of those who knew him then. The listener, when confronted with this body in sound, a body without embellishment, can sometimes react uncomfortably. These aural bodies are naked, complete with their everyday banalities and gaseous emissions. There is a mirror effect at work here which allows for a peak at yourself in the mirror, right at the crack of dawn, with a night you may want to forget written all over your face. However, there is a beauty in this brutality, an immediacy you are unlikely to forget.

Hunters and gatherers of sound have to kill before they chew. The disembodied voices of Failed Suicide are crudités, removed from their origin but still alive. These are willing participants in the games of recording and editing. They are the living dead of audio art, which makes the next question inevitable: How do they taste?

City Zoo / Zoo City resides in the digital realm, the technology at play strangely merging with the idea that “technology, again substitutes for nature.” With digital editing there is an exponential increase in the possibilities of the artist to manipulate the original. In City Zoo / Zoo City animality becomes a digital concept, animal sounds are transformed into horrifying mechanical sounds. The nature of the zooscape here points clearly to the inherent paradoxes of such a site and, by extension, to such a technology.

The space the listener can occupy in these works is expansive, the narrative threads just hanging there, up for grabs. Lander refers to the notion that his work constitutes a kind of writing in sound, primarily to differentiate the work from music. However, as writing, it is of a particular kind, written with radio in mind and, as such, contrasts explicitly with the hegemony of existing radio. This is a radio rendered vulnerable for it retains as much of the body as may be possible in this, the thinnest of air. It is in these inscriptions that radio art finds its tenuous home.

Electroacoustic composer Dan Lander released his first CD in 1995 on the Montréal label empreintes DIGITALes. Zoo regroups four works created between 1988 and 1992. The first two are the most important, interesting and disturbing; they both address communication through the use of speech-based sound material. Talking to a Loudspeaker is a 24 minute reflection on radio. Highly entertaining and witty, it illustrates Lander’s absurd sense of humor. It opens on a series of excerpts from the Legislative Assembly of Ontario, everyone saying “Please Mister Speaker” and “Thanks Mister Speaker” (read the title of the piece again if you don’t understand why). After this introduction, the listener is taken through clichés about the weather, a staged call-in show plagued with technical difficulties, a collage of radio publicity spots — even 30 seconds of dead air. Destroy: Information Only is a lot more disturbing. A piece of audio vérité, it features friends and relatives of the composer recorded in their homes, reminiscing about a surgery he had. Over 34 minutes, their vague memories and personal anecdotes are confronted and mixed with acousmatic bits, forming an intimidating form of auto-exorcism. Failed Suicide also uses human speech as its basis, but with less interesting resutls. City Zoo / Zoo City arranges field recordings of a zoo into a loose narrative while blurring distinctions between the natural and the mechanical. Lander’s pieces require attentive listening in order to follow the discourse. His approach is highly personal, but his constant relying on words might unnerve some listeners.

Zoo is a must-have CD. Talking to a Loudspeaker, a piece originally part of the New American Radio Series, was one of the first pieces to make me think about sound, text, and communication. It is an amusing an intelligent run through ideas of radio and communication, broken down in to short, easy-to-digest pieces. For example [The News], there is an exercise in radio news, which presents two sides of an abortion protest, the political right positioned in the right speaker, and the political left in the left speaker, allowing the listener to adjust the balance. Destroy: Information Only is an experimental documentary of Lander’s problems with a back injury. It’s a frightful but beautifully executed piece. Failed Suicide is the shortest and oddest piece, in which unidentified voices depict, in a very strange manner, a suicide. The last track, City Zoo / Zoo City, is a piece of digitally manipulated field recordings of a zoo, reinventing the animals as anything but animals. A very smart CD.

Unbelievable audio collage that makes heavy use of both broadcast media and natural conversations. The Weather [2nd movement of Talking to a Loudspeaker] is one of the best pieces here. Dan gathered up various televised comments about the weather and sewed them together in a fit of weird inspiration. It’s not often you get to hear that stupid weatherman voice turned back on itself to make it even more idiotic. Other tracks feature the speech of doofy locals interjected with the sound of fluffy jackhammers, extreme examples of voice manipulation, fart noises that intrude on a crew of campers, and a new audio landscape of the city zoo.

Listening to Dan Lander’s Talking to a Loudspeaker is like unwittingly tuning into someone else’s conversation and becoming so enthralled that you can’t tune out despite feeling like you shouldn’t be listening. In this case the conversation has been constructed entirely from snippets of magnetic tape containing miscellaneous bits and pieces of radio signal. The genius of the piece is that it manages to sustain such a riveting narrative despite being entirely constructed of out-of-context words and phrases — like some sort of rhetorical collage. Destroy: Information Only is a piece in a similar vein, only this time the collage is made of larger pieces — whole interviews conducted by the composer with friends and family who are asked to describe their memories of an injury he had had 20 years earlier. Again the sense of aural voyeurism is strangely addictive. Also included on Zoo are the works Failed Suicide and City Zoo / Zoo City. For anyone looking for intimate/compelling art, Zoo amply fits the bill.

… such a riveting narrative…

Another disc from the same label is devoted to music by Torontonian Dan Lander, who generally works with prerecorded text rather than tones. Of the four pieces, the most fascinating is Talking to a Loudspeaker, a 24-minute, often humorous collage of House of Commons discussions, weather reports, radio announcements and even broadcast “dead air”…

Radio art has been discussed here in previous columns and Zoo (empreintes DIGITALes, IMED 9526) from Dan Lander, features one of the most interesting treatments ever heard on the cut Talking to a Loudspeaker with its “variations on broadcast quality and the snicker at our phobia with dead air.” This recording is a fascinating technical achievement as Lander also makes interesting soundscapes from disembodied voices, nature and animal sounds.

Many of the artists included here Dan Lander, Christof Migone and Hildegard Westerkamp favour a “writing through sound” approach over traditional storytelling or Hörspiel. Sound events are edited and arranged on tape as a reappraisal of our audio landscape and as an examination of the referential as opposed to abstract in sound. Little attempt is made to ‘musicalise’ sound fragments in the inauthentic decorative sense often favoured by electroacoustic composers.

The two Radius CDs compiled by Dan Lander are not the creative shot in the arm of his earlier collections Radiophonies and Radio Rethink) Of the elght pieces across this new pair, you need to be fluent in French to appreciate three of them. And I’m not.

Meanwhile, his own Zoo disc contains four made-for-radio works. Talking to a Loudspeaker is a formative stab at a critique of radio which starts like a more humourless Negativland. It opens out as it goes along, but the real coup is provided at the end by radio artist Gregory Whitehead with an incantation — intoned long distance down the phone, each line repeated by the congregation assembled at the end — about the potential transmission has for celebratlng diversity and fostering community: “I dream of a time when everybody lives, breathes and touches each other on air…”

In Destroy: Information Only Lander revisits people who visited him in hospital 15 years earlier. Its a piece about memory where diversity is celebrated at all levels: location, modes of discourse, interaction, experience. There’s no attempt to keep people on track. Rather it’s through these digressions (video games, camp fires, flatulence) that the subjects reveal themselves. An open-ended and endearingly naturalistic model for radio, where radio moves towards the participants rather than the reverse.