… bubbling up from some subconscious recess of the mind. — Splendid E-Zine, USA

The only way to write about Philippe Mion’s Léone is to remain “on one’s guard” — and guard against waxing lyrical about a work that is lyrical in every sense of the word.

Generally speaking, opera as a genre, is a complicated business: no one really seems to know whether it is primarily music or theater. And to hear composers tell it, it is not music that dominates. They, at least the best of them, see music as “the humble servant of a dream.” The transparency of music, the way in which it serves drama, in a word, its subservience, are paradoxically the moving forces of its triumph; its deference guarantees the success of the genre.

Composers are clearly a generous lot, agreeing as they do to share everything with their librettist: glory, royalties, fame, power, even women sometimes (Debussy/Maeterlinck). And it is moreover the modern composer who most aspires to such virtuous self-effacement (modernism does mean the abolition of privileges!), and who would avoid calling attention to himself with a particular melody or some monolith of “pure music”… which would interrupt the flow of the human, all too human drama. All this goes back to Wagner.

And goes right up to Mion. An acousmatic opera: is this an even more semiotically twisted approach? Not really. To my mind, this one follows in the same line. After all, Wagner’s orchestra had already been moved beneath the stage. Here, the lyrical line that emerges from the loudspeakers (which is to say from everywhere and from nowhere visible) is like a melodio continuo: ductile, shimmering, harmonic… It stimulates the music of live orchestra. Very little of it is sound intense, it is rather musical matter whose essence is luminous or lusterless, polyphonic, filled with moaning, machine-altered voices; it belongs to the world of liquidity, of subterranean plains, and of the underlying.

How can music so smooth coexist with so crude a tale of daily life, with such a seamy story, with a book that so cleverly incorporates sordid little GEMS of the vernacular? For in spite of the tenderness of its humor — which fits nicely with burlesque — Léone is clearly a horrible, harrowing tale. Wozzeck, in comparison, is kid’s stuff. And in spite of its angelic character (although the angel here is often rubbed the wrong way and gets a little roughed-up in the process; it’s an angel that has been jolted and ruffled and who has learned a thing or two, a “modern” angel, right out of a Wim Wenders film), the musical matter becomes infused with the drama, like some vulnerable ghost, like the Invisible Man filling up with black ink. Pity — one of the key elements of Tragedy — seeps in increasingly, bringing the heart of this desperately, constantly compassionate music to pound ever more heavily.

In other words, in more structuralist (Barthesian) terms, (and this is where one must be on one’s guard), we can divide this opera into two paradigmatic categories: Layer and Rhythm; or if you prefer Smooth and Rough, or Sublime and Trivial. At each of its level — from the diaphanous level of “pure music” to the level of the most vulgar of stage directions — one finds the presence of each of these two models, or imprints, or forms. And I believe that this morphological composition — which serves to reconcile the horrid and the splendrous — is relevant for the composer as well, who stated that he “was thinking in terms of grandiloquence, tragedy and sublime deaths.”

Let’s take a few examples, beginning with the sublime (a pure layer of music rises to the surface, occasionally scored by verticals); lenghty ululations come first, silky, aspirate, glacial glissandos… and we find these spider-like musical threads throughout the opera, transparent and pitchless, until the pitch is finally heard, at which time it is all the sharper. The musical layers that rise and fall are marked with vertical events; church bells that sound harsh by virtue of their materialness (tracks 1 & 2); or the pointillism of the choirs, with each voice dotting itself onto a composite canvas bristling with soloist effects (tracks 3 & 4); or the stammering of a character (imitated at times mockingly by tape); and then all that chapping, that rustling, that shrill screeching in the accompaniment that ruffles and rumples the smoothness of the music throughout.

When the sublime comes in contact with the prosaic — human drama on one side, music on the other — it creates a strange pathos, which we eventually get used to. Each has its own, self-contained aesthetic, and these parallel worlds attempt to communicate with each other from afar… or that is the impression we have so long as we stubbornly refuse to open ourselves to the audacious musicality peculiar to an acousmatic opera, where strange taped sounds accompany voices singing almost trembling incommunicability — and experienced by an orchestra aspiring with all its might to language and meaning.

But the two do eventually meet. There are connections, encounters (of the third kind) that yield strange musical hybrids, bizarre and moving dialogues — somewhere between the smooth and the rough. And then the all too “divine” timelessness of its delicious discontinuity is ruined, eradicated, when the tape provides, with the greatest compassion, imitations and commentary; when it grates with sounds played backwards…; when angels imitate birds while the mother is dying; when rifle shots, the angry outburst of neighbors and the pounding of Léone’s madness shatter her dreams; as well as every time that the bizarre, coated with the stuff of daily life, becomes more human by bringing language to a boil.

To be honest, this is the first opera recording Splendid has reviewed. Before you envision 300-pound sopranos belting out Wagnerian arias in Viking garb, let me assure you the Léone is nothing like any opera you’ve heard before. The score for Léone is entirely electronic — disembodied sound blaring through loudspeakers — a symbol of detachment and alienation. The music is sparse yet expressive — punctuating the libretto. It is subdued, foggy almost, as if bubbling up from some subconscious recess of the mind. The plot, while perhaps tame by “Natural Born Killers” standards, is by operatic standards intense to say the least. Its treatment of such topics as schizophrenia, fetishism, bestiality, murder, and infanticide clearly sets it apart from even the most sordid of 20th-century operas. Remarkably, the vernacular style of librettist Philippe Minyana lends a sense of whimsy to the atrocities described in the story, resulting in a sort of “black fairy tale” atmosphere to the whole thing. Perhaps most importantly, the existence of Léone this close to the end of the century bodes well for opera surviving the turn-of-the-century mark.

… bubbling up from some subconscious recess of the mind. 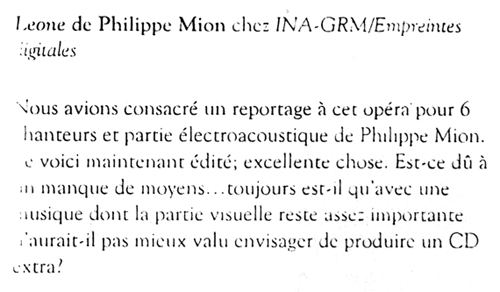