… that encompasses a lifetime of hearing into one, exhilarating pinball game. — ATTN:Magazine, UK 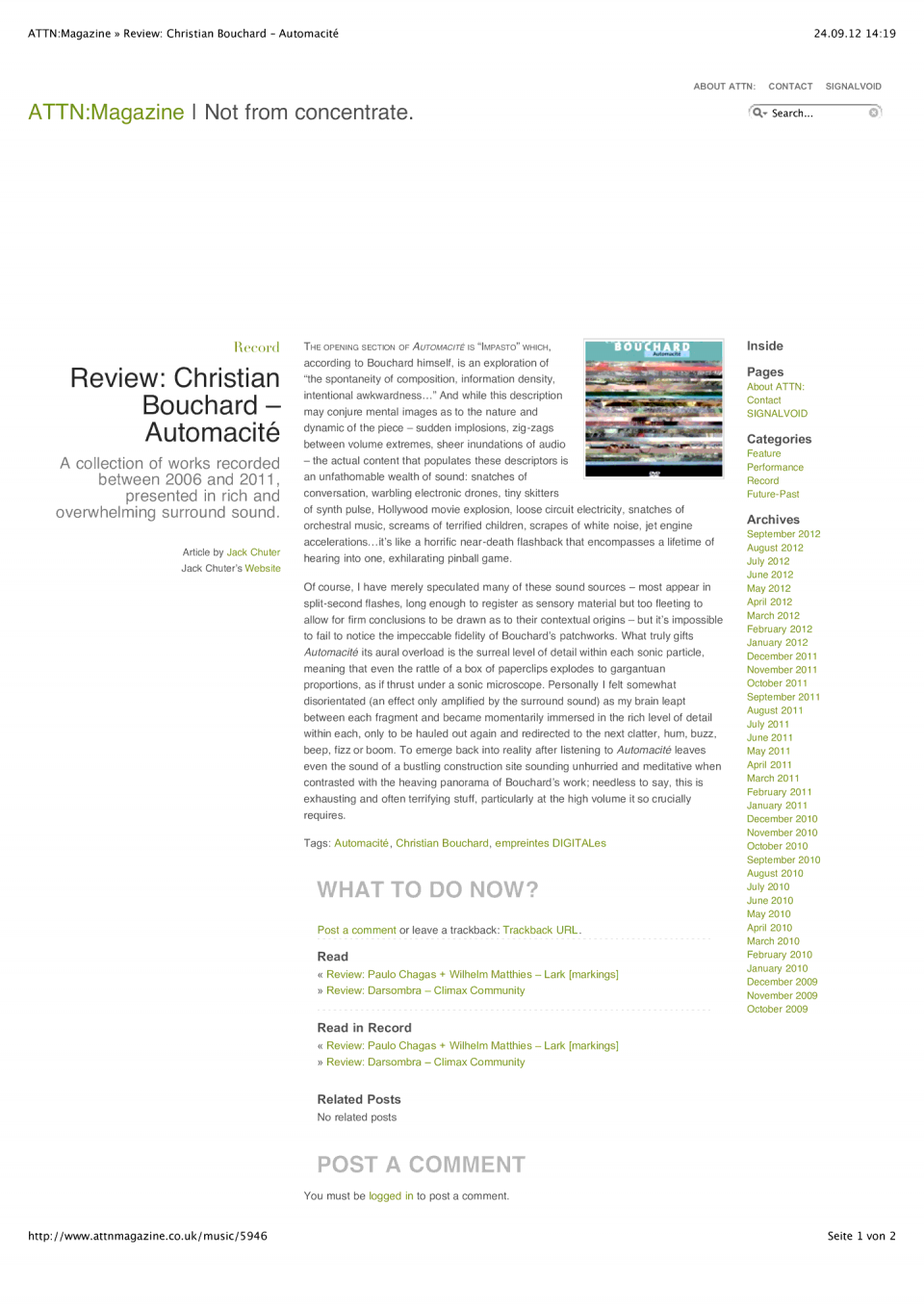 A collection of works recorded between 2006 and 2011, presented in rich and overwhelming surround sound.

The opening section of Automacité is Impasto which, according to Christian Bouchard himself, is an exploration of “the spontaneity of composition, information density, intentional awkwardness…” And while this description may conjure mental images as to the nature and dynamic of the piece – sudden implosions, zig-zags between volume extremes, sheer inundations of audio – the actual content that populates these descriptors is an unfathomable wealth of sound: snatches of conversation, warbling electronic drones, tiny skitters of synth pulse, Hollywood movie explosion, loose circuit electricity, snatches of orchestral music, screams of terrified children, scrapes of white noise, jet engine accelerations… it’s like a horrific near-death flashback that encompasses a lifetime of hearing into one, exhilarating pinball game.

Of course, I have merely speculated many of these sound sources – most appear in split-second flashes, long enough to register as sensory material but too fleeting to allow for firm conclusions to be drawn as to their contextual origins – but it’s impossible to fail to notice the impeccable fidelity of Bouchard’s patchworks. What truly gifts Automacité its aural overload is the surreal level of detail within each sonic particle, meaning that even the rattle of a box of paperclips explodes to gargantuan proportions, as if thrust under a sonic microscope. Personally I felt somewhat disorientated (an effect only amplified by the surround sound) as my brain leapt between each fragment and became momentarily immersed in the rich level of detail within each, only to be hauled out again and redirected to the next clatter, hum, buzz, beep, fizz or boom. To emerge back into reality after listening to Automacité leaves even the sound of a bustling construction site sounding unhurried and meditative when contrasted with the heaving panorama of Bouchard’s work; needless to say, this is exhausting and often terrifying stuff, particularly at the high volume it so crucially requires.

… that encompasses a lifetime of hearing into one, exhilarating pinball game.

A student of composer Yves Daoust, winner of various prizes for electroacoustic compositions and founder of the live electroacoustic quartet Theresa Transistor. He seems to me the typical sort of composer you’d find on this label. In 24-bit they present three of his pieces, Impasto, Parcelles 21 and Objet menacé. The first is the longest and a triptych about expressionist abstract painters (Pollock, Riopelle and Shiraga), and it sounds indeed like expressionist abstract music. Lots of sounds thrown together and then mixed, edited and treated further. At least that’s my best guess upon hearing this music. Sounds roll about like thunderous storms and walls of snow bursting into masses tumbling down the mountain. A nice piece for sure, but perhaps at forty-five some minutes all a bit long. Luckily Parcelles 21 — a revised version of Parcelles 1 and Parcelles 2 — provides a more quiet piece, but is also moving all over the place. It’s hard to say, in both of these pieces what it is that Bouchard is using sound wise. Field recordings perhaps, but also down right electronic matter, and maybe acoustic instruments being treated in one way or another. It’s hard to say, as the level of abstraction is quite high on this release. The final piece is Objet menacé and the cover says it’s a symphony for parking meters, and brings up the massive attack again of the first piece. While some of this music sounds alike what similar composers do on this label, but throughout I seemed to like this more than some of the others on the label, but it’s not easy to pin down why that is. Maybe it’s the level of disturbance, or the notion of improvising with his sound material and the editing thereof? Maybe it’s the overkill in sound anyway? I am not sure. Maybe it’s the heat that provides me from thinking straight.

Maybe it’s the level of disturbance, or the notion of improvising with his sound material and the editing thereof? Maybe it’s the overkill in sound anyway? 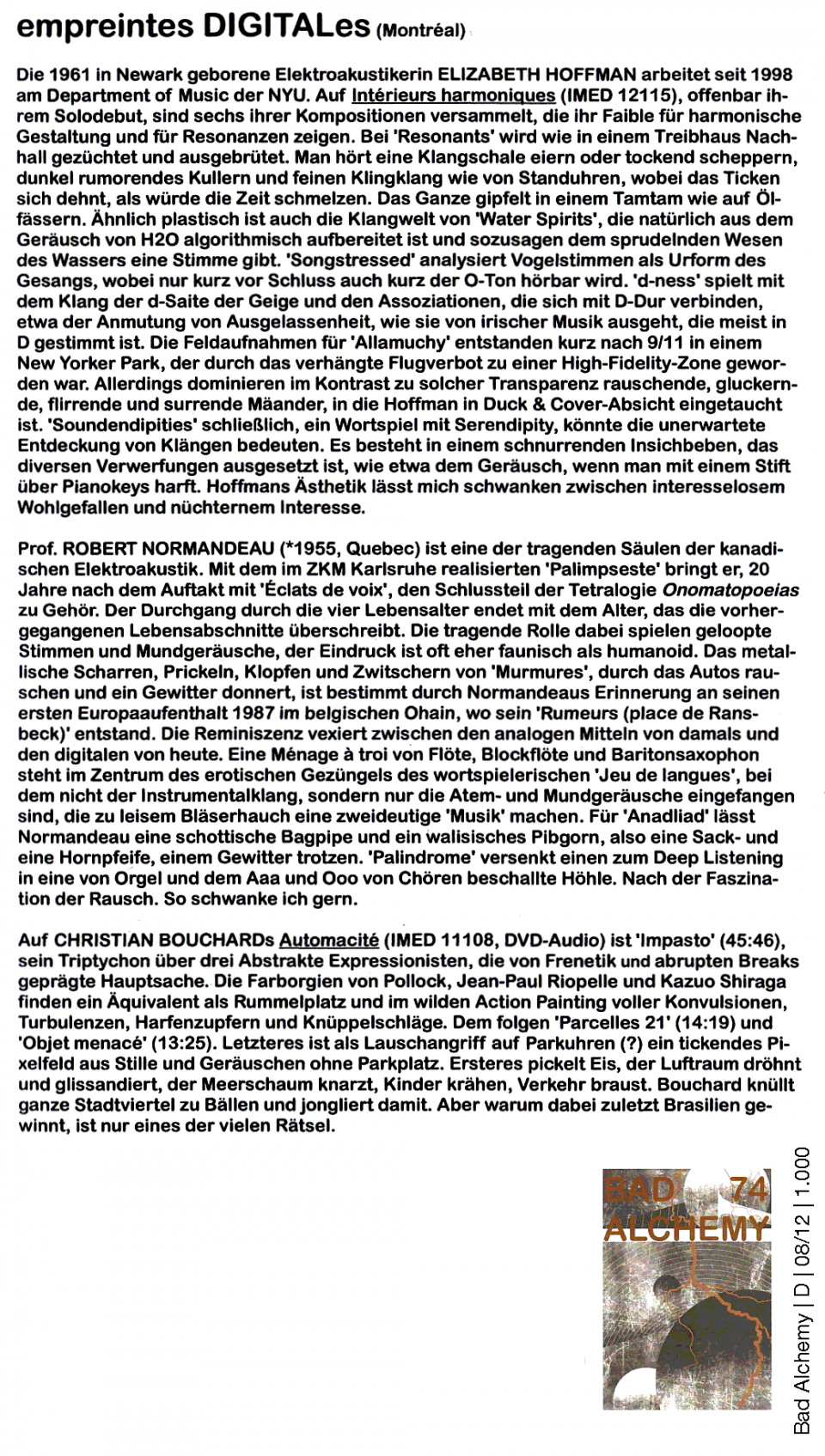 Attracted to robust impacts, acute pin pricks of sound, and jittery crawls across glistening aural surfaces, Bouchard still creates the impression of a beat, even in the absence of a metric pulse. This bit of percussive punctuation serves his work well. Amidst the storm of stammering vocal reminiscences, thick serrated tones, crystalline trickles of noise, and bright pixelated beams, these temporal markers provide some welcome beacons.

The scope of the disc, though, is much wider than this dense metallic foliage. Things also slow down and thin out into sleek fluorescent ribbons and other longer, smoother shapes. While still maintaining almost unmanageably high fidelity, and perforated with little glitchy spurts, Parcelles 21 has the surface texture of an ice sculpture — cold, reflective, and transparent.

Automacité features three compositions (2006-10) in 5.1 format (DVD-A and DVD-V) [and stereo]. Bouchard is an agile sound artist, and he knows to step back from his sound sources and the concepts underpinning his compositions. In Objet menacé, the parking meter at the core of the work is quickly forgotten in favour of the intrinsic qualities of the sounds it makes. The magnum opus here is the three-part Impasto, 45 minutes of criss-crossing aural fluxes in homage to expressionistic/abstract painters. It’s lively, saturated, free of any markers — you can lost in it, and it’s perfectly fine to get lost in it.

It’s lively, saturated, free of any markers — you can lost in it, and it’s perfectly fine to get lost in it.