Nothing can be farther from the canon of academic experimentation than No Type’s unique, often grassroots and utterly leftfield roster. — e/i magazine, USA

A 73-minute work separated in 33 tracks of arbitrary length, Front is not to be easily explained. At the frontier of conceptual art & listening music, obnoxious candy pop & extreme experimentalism, Front introduces a compositional approach which, according to the composers, may be dubbed “domestic.” The work unfolds as a string of events, whereby conceptual relationships between sounds & ideas paradoxically gives birth to musical content. The composers have integrated in thie work their own feelings & experiences towards the ambient cultural narrative & pop music in particular.

Unlike many similarly ambitious works which assume a linear, almost meditative attention from the listener, Front prefers to toy with the idea that the listener’s attention is a kind of data to be played with, much like tone or rhythm. Finally, Front seeks to explore the dangers of musical identity, & the concept of structure as a victim of interrogation. Without attempting to criticise one particular aesthetic or another, the work is nonetheless highly suspicious (almost antagonistic) towards the attitudes leading to an aesthetic choice. To shrug off Front as too “intellectual” misses the point of the real listening pleasure to be found throughout. Thanks to its highly peculiar form & its total integration of the CD medium, I wouldn’t hesitate to qualify Front as a completely unique gem in the world of electroacoustic & electronic musics. 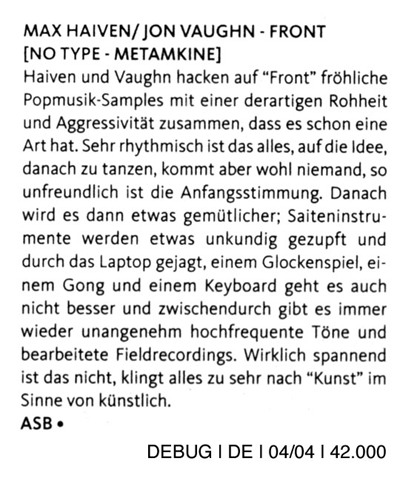 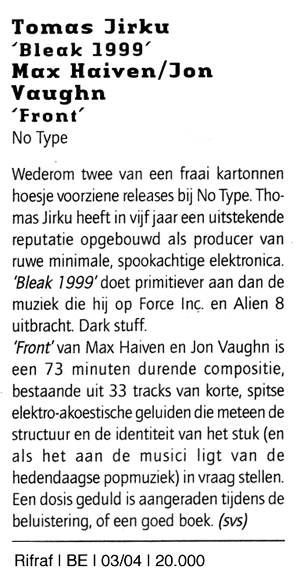 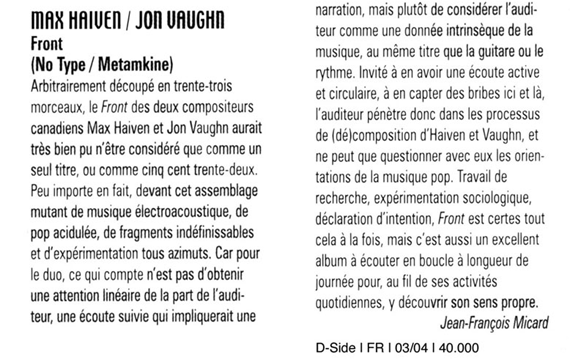 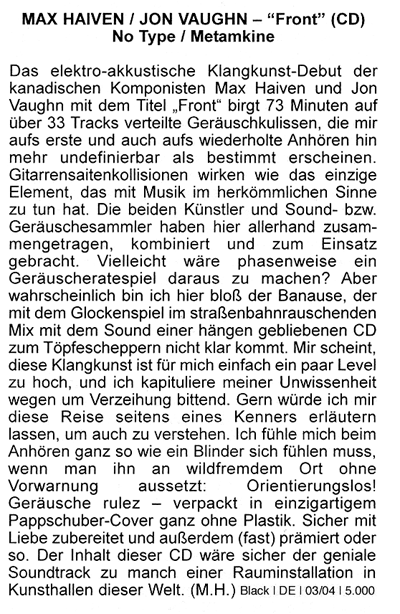 The duo’s actual approach is unknown, but a record like Front, without any discernible structure, would almost have to have some extemporaneous elements dropped in on the fly. In fact, the two are seasoned in the art of electroacoustic improv, having performed live together and with others at various musical events in Canada. Their sounds unfold organically, sometimes beautifully; the interruptions and incoherence of this long piece are its structure. There is a chunk in the middle of the album that is nothing more than an oscillating organ note, held down over the course of four tracks. Why these tracks were broken into lengths of 1’14”, 2’11”, 0’17” and 4’02” is unimportant. The arbitrary methods adopted by Haiven and Vaughn are about rejecting convention, and, while that’s hardly a costly stance in the context of experimental music, Front gets its point across in joyless fashion. Thing is, it’s an impossible thing to pull off, entirely — their glitchy loopage is not exactly a novelty — but the boys know this. Their talents as sound sculptors speak for themselves (check out track 24, an impressive percussive montage) and, in the end, the pair make an interesting racket that succeeds on its own merits, concepts aside. That said, gimme The Spice Girls enhanced by a pocket knife any day.