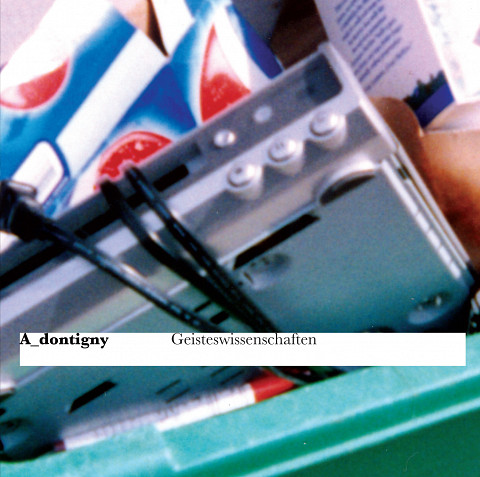 It is a collage of sound involving different genres and different listening dimensions. — Neural, Italy

“Today, when we can eat Tex-Mex with chopsticks while listening to reggae and watching a YouTube rebroadcast of the Berlin Wall’s fall – i.e., when damn near everything presents itself as familiar — it’s not a surprise that some of today’s most ambitious art is going about trying to make the familiar strange. [...] Whatever charge of tastelessness or trademark violation may be attached to the artistic appropriation of the media environment in which we swim, the alternative — to flinch, or tiptoe away into some ivory tower of irrelevance — is far worse.” (Foster Wallace, as “plagiarized” by Jonathan Lethem in The Ecstasy of Influence, Harper’s Magazine, February 2007)

This first solo CD by composer A_dontigny (morceaux_de_machines, Napalm Jazz, Ensemble Camp…) has been deliberately conceived to be in the margins of electroacoustic music, electronica and audio art.

Thought up as a series of short sarcastic vignettes, Geisteswissenschaften skilfully manipulates common aesthetic postures in order to create a sound mosaic where one can find hints at modern art history and philosophy. To an arsenal of cut-and-paste and cut-ups, to which we may include encoding glitches and all matter of samples and quotes, A_dontigny adds the sonic interventions of three of his usual collaborators: Paul Dolden (electric cello, guitar and bass), Diane Labrosse (sampler) et Jon Vaughn (remix).

An ode to freedom? A manifest against all dogmas? That’ll depend on the mood of the listener. In the end, Geisteswissenschaften wishes to be a celebration of independance of spirit and human intelligence, one of those rare works that continue to be nourished by great hopes. 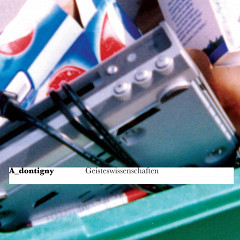