Following a web release called Boredom is Counterrevolutionary (No Type), & a CD called Everything Happens Only a Certain Number of Times (Mitek, Sweden), both of which have received unanimous kudos from magazines & mailing lists, Claudia Bonarelli continues to astound us all with this new gem of a release.

Claudia Bonarelli is interested in the social evolution of our societies, & this is reflected in her choice of themes & song titles. But rather than illustrating the violence of change litterally, these four songs have a melancholy to them which says more about the lost illusions of a young society deprived of a voice.

Of course, that’s not saying anything about the irresistible, desperate funkiness to be found on these four exceptional tracks. But after all, funk (be it minimal) was never about anything but conflict…

After a fine album on Mitek, we hear from la Bonarelli again through this hazy/clear vinyl 10” e-p on No Type. And it’s once again quite good, doing electronic glitchdubs that may not be terribly original any more, but which are challenging listening experiences in their own right. One is actually pretty groovy. Which is nice…

… it’s once again quite good… 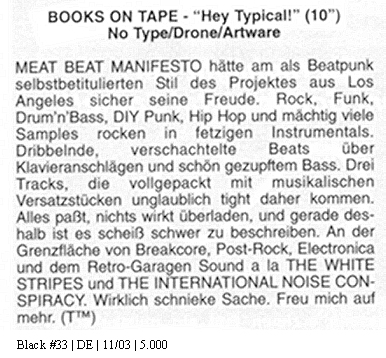 Groovy click-house they say; dystopian mood-music we say. For the historically challenged among you, 1968 was a pivotal year for youth, with student riots in both France and Italy coinciding with a growing cynicism across the campuses of America, and here Sweden’s Claudia Bonarelli captures EXACTLY the mood of slow-dawning realisation that a change is gonna come, and it’s going to involve a fight. Electronica has never, read NEVER, been so emotive. Outstanding.

Electronica has never, read NEVER, been so emotive. Outstanding.

It’s groovy, deep and funky, yet there is nothing happening. A few clicks here and there, the same keys relooped over and over again, an almost inaudible bass and the straight drumbeats lost even further down in the mix. It is cool, relaxed and will make you bang your head nevertheless. The invisible disco. Minimal is the word. Four tracks for the modern lounge right before the night breaks loose. And no one will care if that lounge is in some urban hotspot or your own livingroom. Or if you make your living room into a hotspot. If you have style, style is where you have it.

Claudia Bonarelli from Sweden has released on Mille Plateaux and Mitek. And she has style, I am sure. Listening to these four tracks you wonder, why she never released on Kompakt, but she is not from Cologne. See. Four tracks not too different from each other, only in the intensity or non-intensity of the four-to-the-floor house-beat that is subdued somewhere in this mixes, and sometimes missing completely because it is transformed into a repeating static-click. So these tracks make for good at-home-listening as well. If you want to play that at home. And I know, that there are more people doing DJ-Sets for themselves at home than you might think.

This is one of those records, where you think that listening really closely will reveal that there is a lot happening that you don’t hear if it just plays in the background. This time it is not true. There is not a lot happening. It is the mix and the relations between these few ingredients that make the magic of these tracks. This is where the space between sounds becomes as important as the spaces filled with sound. Minimalist. Another vinyl brick in an ongoing musical revolution? If so, it is a silent one. No flames and bombs, only dancefloors and DJ-sets slowly progressing onwards to something new. May ’68 is named as a “DJ ready, 120-gram clear 10” release” – does that say it all?

Four tracks for the modern lounge right before the night breaks loose.

[…] Bonarelli has a prety clear understanding of how you create pleasant dubby techno in a Chain Reaction-like style. Music suitable for coffee drinking. […]

No Type has launched its first vinyl releases & they are keepers. Bonarelli investigates edgy, minimal beats with Consumer Culture and pays homage to revolution & Detroit on May ’68, with an electric-infused, beatless pattern of cascading & melodic rhythms (nods to Carl Craig). The flipside contains two further gems in the realm of atmospheric dub/techno. While Public Transportation is true dub BPM, the fade in-out of the 4/4 kick gives it a breathless pulse. Pop Summer Nights slices the ambient drones slowly, eventually brandishing its distant beats with a drifting mindfulness worthy of Chain Reaction.