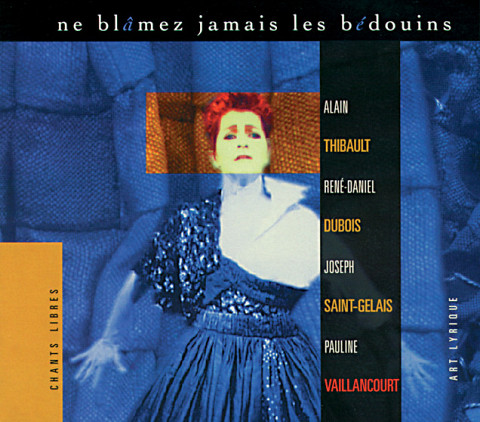 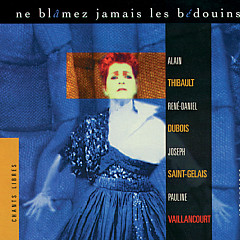 The idea of an operatic version of Ne blâmez jamais les bédouins (Never Blame the Bedouins) by René-Daniel Dubois came to me as early as the first rehearsals for the theatrical production (the work was premiered in 1984) so much its structure, its framework, its very breath called out for a musical envelope.

It was necessary, however, to wait until the arrival on the Montréal scene of the company Chants libres before this opera project could become a reality. After becoming convinced of the necessity of writing an a cappella work, composer Alain Thibault began to write and one year later, in September 1991, Ne blâmez jamais les bédouins was premiered at the Théâtre de la Licorne in Montréal.

With the original text for a solo actor, Thibault executed minute edits to ensure an opera of reasonable duration in view of the extreme textual and vocal difficulty that the performance entails. Thibault perfectly seized the originality of the structure of Dubois’ text: the entangled confusion of vertical/horizontal leading threads. These fragments of stories that the author gives us to follow are distilled by bits and sequences, form a texture whose definitive design of which the spectator (or the auditor) will not be able to seize until the very conclusion of the presentation (or audition). If one analyzes the musical sequences of the score, one ascertains that the composer has surpassed the simple setting of text to music. He has attained a surprisingly ‘natural’ symbiosis of poetry and music.

This is exactly why one could never classify Ne blâmez jamais les bédouins in the category of ‘opera’ as one ordinarily understands it, but rather in that of the more vibrant and active category of total musical theatre of which Wagner spoke. Only the character of Michaela has the right to several justifiable melismas: she’s a diva.

On stage, I therefore wished to show, by mathematical displacement, all the creative and poetic daring of these many cries/chants hurled aloud by the twenty-nine characters from the bottom of their inner selves. It wasn’t a question of making a versimo or naturalist production. When the final hour has sounded and the definitive stakes are in place, the only thing indispensable to the comprehension of the listener is a plenitude of Meaning.