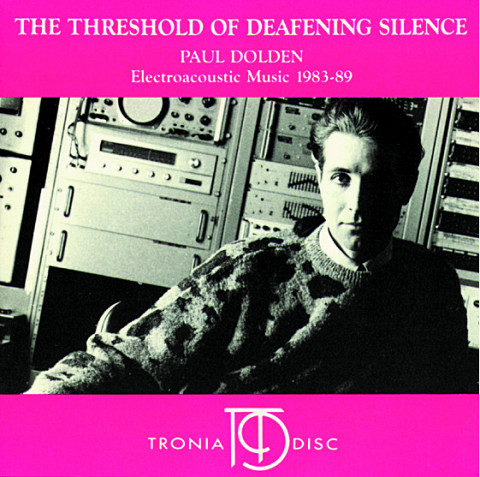 The Threshold of Deafening Silence

Truly phenomenal. Dolden’s compositional technique is to avoid any electronic effects or processing, and to simply record and mix acoustic instruments. However, this recording/mixing employs doubling of tracks over and over until often 400 tracks appear at once. The resulting music is as dense as Penderecki, but with the power of Megadeth. The listener becomes rooted to the spot. Stunningly inventive, Dolden is a major new force, we could not endorse this more fully.

This retrospective of Paul Dolden’s work is the first release from TRONIA DISC, a new arrival on the Canadian independent scene whose mandate is the “releasing of fine editions of electroacoustic music and text/sound composition on compact disc". The Threshold of Deafening Silence brings together four of the most important of Dolden’s works during the period 1983-89. The integrity and conviction of Dolden’s highly personal approach to electroacoustic creation is clearly stated in his opening remarks in the CD booklet. Dolden’s music confronts the listener. One is immediately embraced by the sounds themselves; sounds which are boldly propelled through the work by carefully defined gestures and compositional organization. The surprising familiarity of these sounds, despite their frequent superimposition, juxtaposition and complex rhythmic manipulation, contributes to the kinesthetic engagement the listener experiences. One feels in each of Dolden’s works an almost alchemical exploration of the medium, of the materials that have been chosen to fill the space and time, and of the manner in which the materials are deftly blended, stripped and remolded to emerge entirely transformed and renewed.

Below The Walls of Jericho (1988-89) is the most recent work presented here and exemplifies the level to which the composer has aspired with his compositional techniques. Up to 400 tracks of instrumental recordings are superimposed to create a massive pounding wall of sound. Manic flurries of sound escape from this wall during short interludes, only to be drawn back into its incessant drive forwards in an accumulation of speed and power that ends in wheezing exhaustion. The sheer power and vibrancy of timbral seduction, the potent rhythmic jockeying of splintered sound masses, and the organic evolution and structure of the work make this a truly awesome listening experience. In this work, as well as In the Natural Doorway I Crouch (1986-87), there is a surprisingly medieval quality in the gestures and sounds that perhaps arises form the predominant use of wind and reed instruments as sound sources. The latter work also makes extensive use of string instrument sources and a system of floating Just Intonation developed by the composer. The frequent coupling of recognizable string and wind timbres with rhythmic characteristics not usually associated with these sounds lends a unique rhythmic profile to the work as a whole. Caught in an Octagon of Unaccustomed Light (1987-88) exhibits a decidedly industrial edge, like a percussionist flailing about madly with a sledgehammer as he plummets down an endless abyss of cymbals and gongs! But the work is not without its many turns and twists as we hear the composer carefully testing and choosing each contributing timbre and placing it in its own distinctive rhythmic and spatial stratum. There is less superimposition of timbres here and more attention to the fascination held within a single complex timbral construct and its rhythmic vitality. The Melting Voice Through Mazes Running (1983-84) is the earliest of Dolden’s works presented here and differs from the others in its extensive use of the POD computer music system at Simon Fraser University (as opposed to the facilities of the composer’s private studio used almost exclusively for the other three works). Nonetheless, the careful attention to integration of materials and structure, and the overwhelming obsession with rhythmic evolution and complexity at the macro and micro levels of the work is already evident and strongly ties it to the subsequent works in Dolden’s oeuvre.

The title of the compact disc is undoubtedly a reference to the decibel level at which these works are usually presented in concert. It may also refer to the many islands of silence that dot Dolden’s musical waters; islands where one has a moment to ponder the dimensions of his sonic world before being pulled once again beneath the frothing waves.