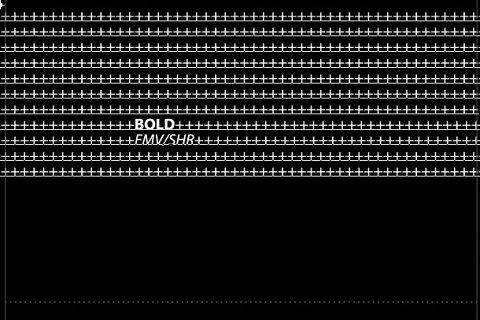 This item can be downloaded and/or listened to at bold.bandcamp.com. 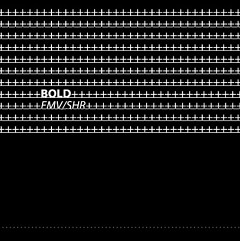 While I’ve been familiar with Nicolas Bernier‘s work for many years, I only recently stumbled across Bold — a project on which he collaborates with Montréal- and Québec City-based artists Alexis Bellavance and Érick d’Orion. I can thank Francisco Meirino’s cameo on the B-side for that, as my respect for his work was enough of a recommendation for this album.

The first thing to grab the listener’s attention on the opening track, the demi-eponymous fmv, is the significant and diverse dynamic range. While the piece (and the album as a whole) flirts with outright noise, it is finely tempered with flighty sounds whose origins are difficult to ascertain — the whispers of either wind or cassette reel friction early in the piece are a good example. Grounding itself in a sort of harmonically industrial drone through the middle, fmv briefly breaks into power electronics before descending into something of a noise jam session backed by oddly slow and delicate cymbals.

The cymbals feature again on the second track, this time pacing an incredibly tense cycling atmosphere we expect to descend at any second in a similar fashion to the opening track. Instead, we get a brief sample of trip-hop played through molasses followed in a rhythmically periodic fashion by bursts of musique concrète and microphone experiments. With such a short attention span, it would be easy to dismiss the music as self-consciously experimental and disorganized, but that is not the case here. The pacing is careful and sound and timbral themes are cohesive. There is a distinct note of Montréal-flavour 20th century acousmatics throughout, especially in the percussive sampling and comb filters; the latter of which I would normally find very grating but which is employed only in the harmonic beds in a monolithic manner as opposed to the psychedelic arpeggios that date the technique instantly. The style thus functions as an homage and thankfully walks deftly between academia and noisy jam band without resorting to pastiche.

shr is perhaps the noisiest of the set. Again jazz-like percussive elements ground the piece avoiding alienation of the listener, and its caesura midway through flips it on its head. That Meirino’s contribution of the final track fits so seamlessly with the rest of the record is a testament to the album’s strength. It is also a fine summation of its form — dynamically diverse, full of activity, compact, rhythmically noisy and yet somehow still pretty.

I often find it difficult to get my hands on Can-Con with much to contribute to contemporary music. Given a small population, low population density and lower still regard for public (or private) art funding, this comes as little surprise (it seems self-evident these days that much of what does constitute relevant work comes from Québec). That makes fmv/shr all the more satisfying for this cynical Canadian radio producer.

The release is available in a limited edition of 40 cassettes or in an unlimited form digitally — both can be found at Bandcamp.

Bold is the one-two punch experimental noise trio of Alexis Bellavance, Nicolas Bernier, and the ever-astounding Érick d’Orion. fmv/shr is, if I’m not mistaken, their first physical album (there was a virtual debut a while ago). An ultra-limited edition cassette. The album is also available in digital format on bandcamp for almost nothing. It’s dynamite. It’s gold. Okay, it’s gold-plated dynamite. Unfurling noise, complex, deep-running; cathartic music, immersive music. Three pieces (and the three-minute title track packs as much punch as the much-longer other two), plus a remix by Francisco Meirino who manages to fit in perfectly with the original material. The whole thing goes down marvelously well, if you know what you’re buying. Noise album of the year? Sorry, Érick, but I think your Koursk, as wonderful as it is, just went down a notch on my countdown.