… Tutschku makes a strong humanist case that transcends faith, ethnicity, and geography; in his mind, he’s clear that the voices “are joining to memorialise unity, and to rejoice.” — The Sound Projector, UK

Three long pieces of electroacoustic composition from German composer Hans Tutschku on his Firmament (empreintes DIGITALes IMED 15131) collection received here 8th July 2015. As with many of the musicians on this label, he’s got a conservatoire / academic background, with highlights of his career including a three-year tour with Stockhausen (mainly to study the master’s ideas about sound projection) and earning his doctorate under Jonty Harrison at the University of Birmingham.

2010’s Firmament — Schlaflos is like an abstract painting with its strong contrasts of highs and lows, quiet and noisy passages; and it has that “rushing” effect as of music travelling along a long tunnel at high speed, which I’ve always associated with Parmegiani (I think this is where I first heard it; presumably it’s a matter of layering and vari-speeding). There may be some human voices in the mix, whimpering or bleating in awe of the cosmos. Tutschku manages to transcend his technique and arrives at something more than just a nice blend of drones and textures; it’s something to do with his ambitious theme, which is to describe the “universe of sound” that he believes is constantly playing inside every human being. He sees that as a good thing; we don’t need to be afraid of it, it means that there are no limits to our space.

2011’s Klaviersammlung is a piano piece of course. The composer describes it as “an outrageous sound travel into the world of piano”. Every time he went to the University of Cologne he walked a long corridor filled with decrepit broken pianos, and he imagined (it’s becoming clear what an old-fashioned romantic he is) that they still contained happy memories of the music that was once played on them. This composition is his bid to unleash those memories. The sounds he captured from the actual pianos after he raised their dusty lids was not apparently very “musical”, but it’s the studio assembly and processing that’s the relevant part of the work. Again, it’s large-scale, transformative, intuitive, exciting. Crazy arpeggios, impossible glissando statements; the ghost of Harry Partch walking through clouds in the stratosphere. Conlon Nancarrow was not invited.

2014’s Issho ni is perhaps the strongest work here. We might call it a “sampling” piece, except that word doesn’t begin to do justice to the care, attention and compassion with which Tutschku has diligently curated and assembled his collection of vocal recordings from around the world — songs, prayers, lullabies, folk singing, children’s songs — an ongoing project which he’s been doing since 2009. Using this personal library, he builds what he calls “an illusory celebration”, a vocal pan-cultural ritual in which the listener will slowly become involved as it unfolds. I suppose it’s “illusory” because these people (from varying cultures, histories, countries) have not only never met in real life, but may not even share any common ground, except in the idealised artistic space created by the composer. He’s done something similar in the past for Ailleurs-intérieur, where the recordings were combined with composed phrases and instrumental sounds, to create “utopian” musical works, and with Together which was used for a dance performance in Boston. Issho ni is a profoundly moving listen; without ever overstating his case, nor editorialising (something which Stockhausen could not resist doing on his 1960s epic work Hymnen), Tutschku makes a strong humanist case that transcends faith, ethnicity, and geography; in his mind, he’s clear that the voices “are joining to memorialise unity, and to rejoice.” Given the state of the world in 2016, can any political, economic or military agency say this?

… Tutschku makes a strong humanist case that transcends faith, ethnicity, and geography; in his mind, he’s clear that the voices “are joining to memorialise unity, and to rejoice.” 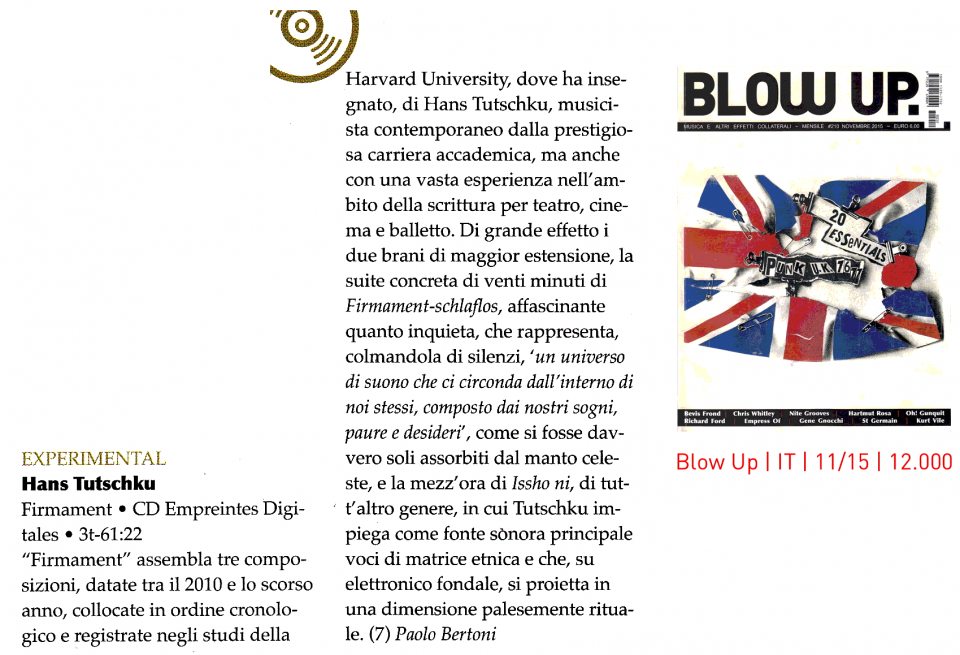