… an exciting prospect, and one which I’m happy to report broadly lived up to expectations. — Tempo, UK

… an exciting prospect, and one which I’m happy to report broadly lived up to expectations. 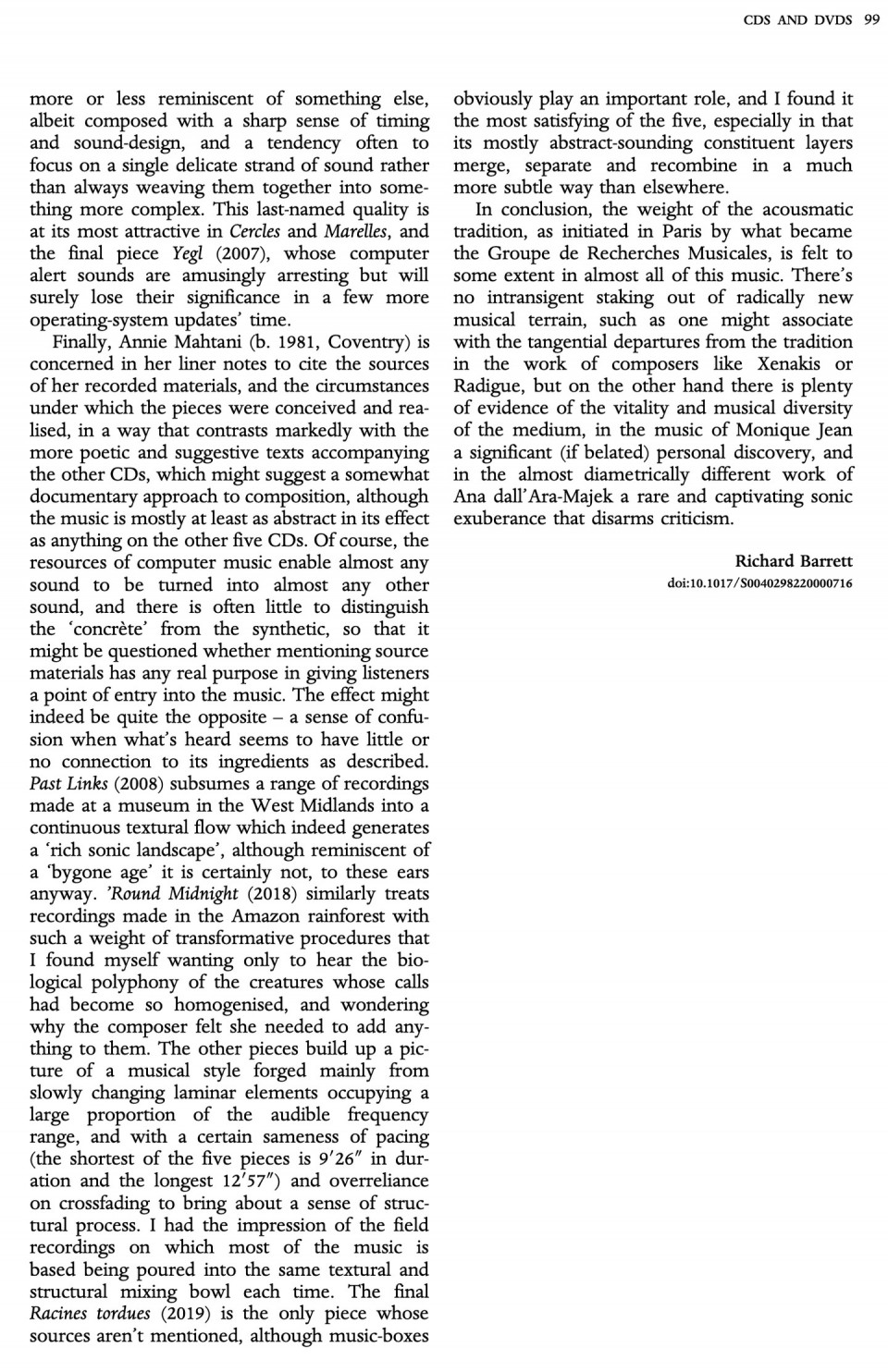 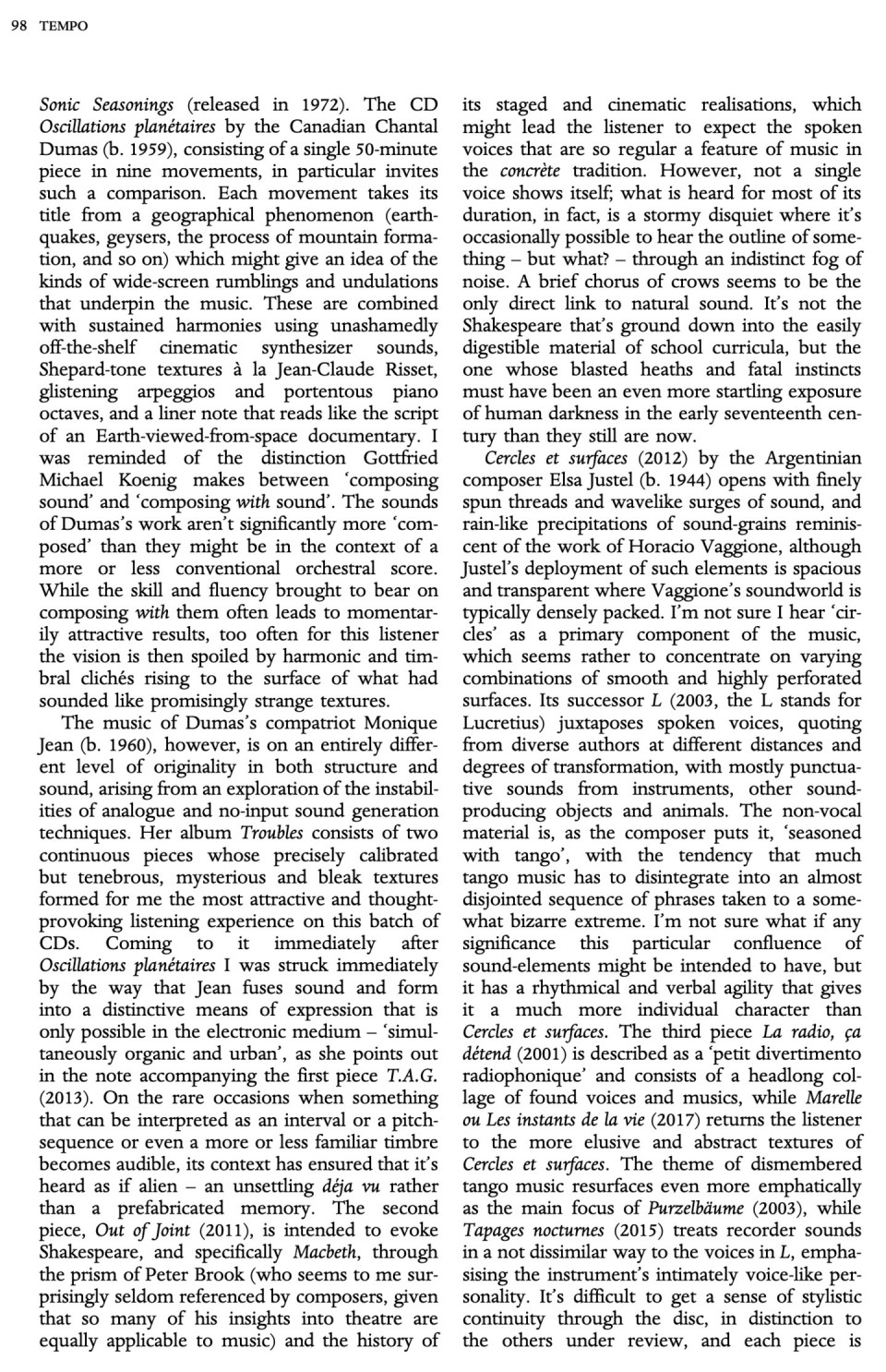 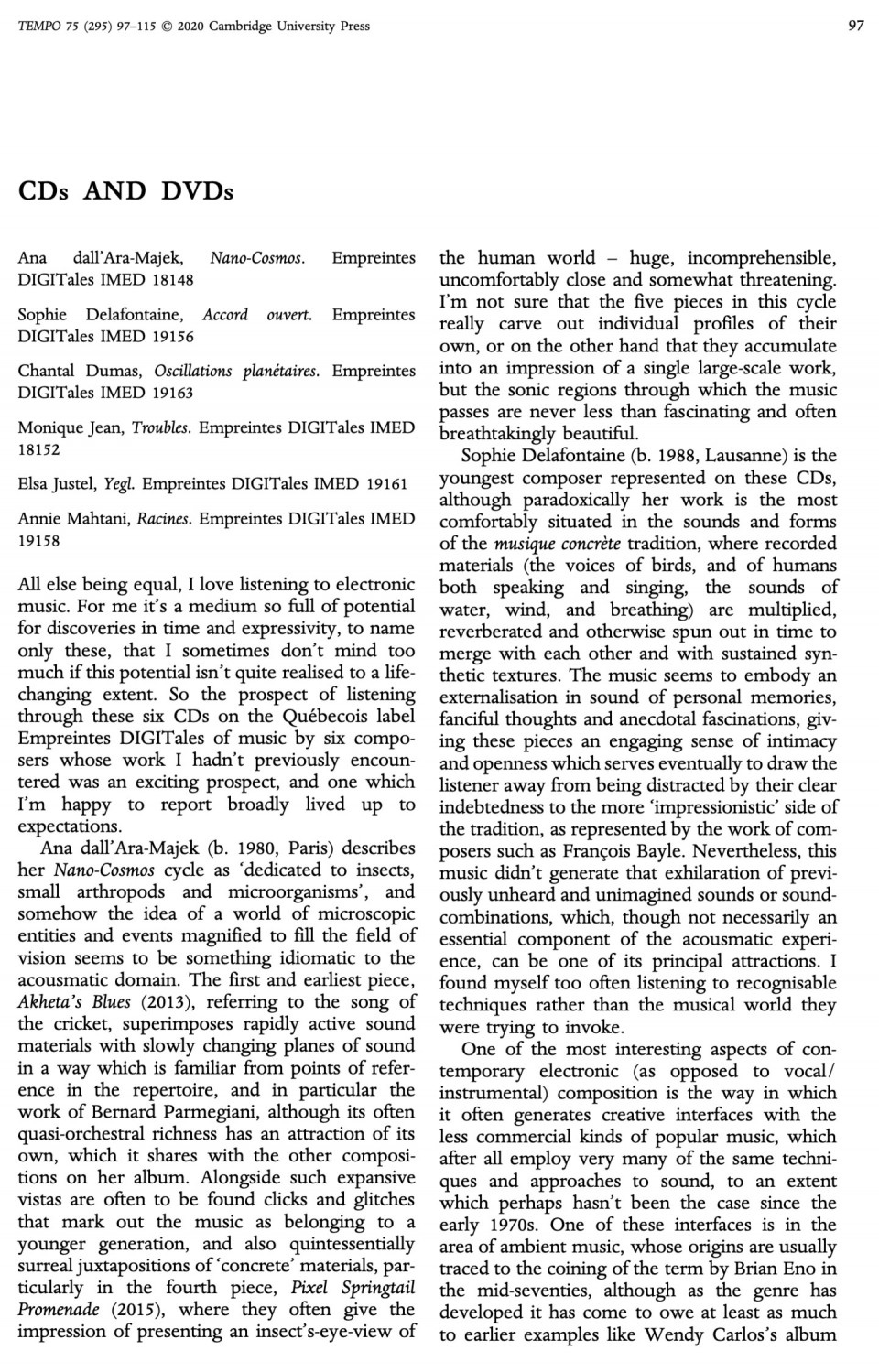 Another solid set of electroacoustic compositions by the great Monique Jean on Troubles. This particular genius deeply impressed Stuart Marshall with her 2012 album Greffes, when he dug the “violence apparent in these audio autopsies”. No less dark is today’s Troubles, with a nice grim abstract art cover and two heavyweights slugging it out in the musical arena.

T.A.G. had me rooted for 25 mins with its solid, mesmerising push of sound; one thing that struck me was her stark lack of baroque detail, by which I mean the digital frills and curlicues which often beset other composers on this label when they overcook their work in the studio. This piece delivers its stern message with no fancy preliminaries. I often get lost reading the highly abstract descriptions on these Canadian releases, but this piece has a meaning I can just about fathom. The acronym T.A.G. unpacks into Trottoir, Ashpalte, Goudron, and the work began by making observations about the weight of people on the streets agitating the gravel. Observing a crowd of protesters may have been one starting point for Jean’s ruminations, but she ended up seeing the mass of people dissolve into “energized shapes”, evidently transfixed by their errant movements; she saw a world of collisions, tensions, and forces moving down bifurcated paths. Urban malaise is a regular theme for phonographers (Philip Sulidae comes to mind), but Monique Jean never settles for bland recordings of street vistas, and does it with conviction, and strong ideas about society and mankind. It ain’t a pleasant vision, but there’s a lot of hard-nosed reality baked into these digital cloppings. It ought to be required listening to anyone who dreams of taking up architecture, or town planning. They’d soon learn what they have to contend with!

Out Of Joint may not have the immediate bone-crunching faculties of the above, but its generally macabre tone and pessimism are welcome elements, to say nothing of its majestic sweep. The starting point was something to do with Shakespeare, but this is not an attempt to “re-present” that canon of literature in modern compositional form. Monique Jean began by deconstructing a number of interpretations of Macbeth across time — movie versions, stage versions, rewrites. This isn’t to mean she directly sampled the soundtrack of Polanski’s Macbeth for instance; the process that is relevant is “across time”. She’s attempting nothing less than a compression of several different viewpoints and interpretations, attempting to “graft” them together in her music (the Greffes album was full of such grafts). How has history dealt with the “moral and ethical issues” raised by Shakespeare? That is the theme that interests her. At the same time, it’s the multiplicity of voices that she likes, moving away from the attempts to form a single critical consensus of the canon (a problem that has arguably bogged down English literary criticism for at least 100 years). In doing this, she reflects some of the great contradictions and contrasts that are embodied in Shakespeare’s work, what is referred to here as an “entwining of the coarse and the sacred”. It’s much to her credit that she conveys this without using any spoken word at all; Out Of Joint is mostly abstract sound, though with some suitably eerie sound effect recordings such as rainfall and crows calling. A detailed, blackened suite of sheer genius. 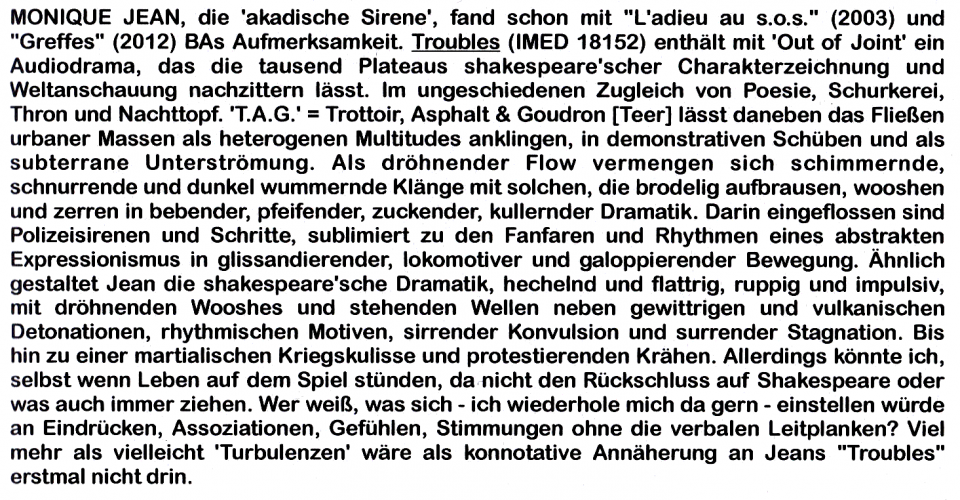 Troubles is Monique Jean’s third solo release, and its two pieces each boast an ambitious conceptual backing. The kinetic T.A.G. was inspired by rippling collective movements by crowds of people, an influence that is represented well by the composition’s litany of synthesized elements that progress with masterful pace and control. Jean’s sonic palette is dominated by the cold and artificial, with both actual recordings that are heavily processed as well as pure synthesis, but she commands this electronic orchestra with distinctly organic movements in mind. Out of Joint continues with that contrast, incorporating more recognizable sounds such as screams and the cawing of crows, but for an entirely different purpose; the piece is a sonic essay on the endurance of Shakespeare’s Macbeth throughout history.

… she commands this electronic orchestra with distinctly organic movements in mind. 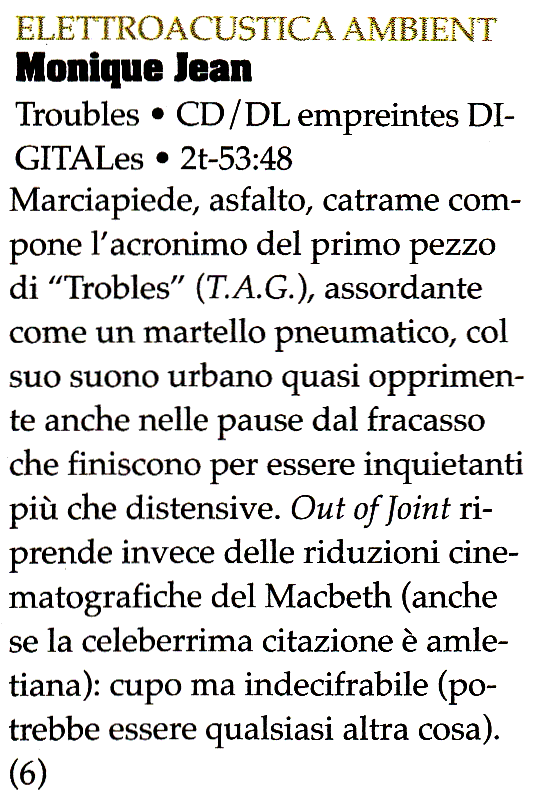 Montréal-based composer Monique Jean offers two works on Troubles: T.A.G. (2013) and Out of Joint (2009). This is her third full-length effort with Canadian imprint empreintes DIGITALes, was mastered by Christian Bouchard. Let’s get started with T.A.G. — or (trottoir, asphalte, goudron: sidewalk, asphalt, tar), watch your step as we explore this twenty-five minute mysteriously synthesized work. It opens in a dark, fragile unpopulated urban space, save for the detritus left behind, like what sounds like rustling plastic shopping bags int he wind, and the rattle or tin roofing. The airy space and continuous drone sounds as though something has caved in and is falling fast into a cavernous black hole — like two worlds colliding in space.

The composition seems so free and tactile, rubbery screetching like a terrified rodent, frenetic effects and all. The actions like those of locomotives and other machines seem to be in reverse here. Perhaps this is a comment on the fragility of the precious Earth below our feet, how we cover it in a man-made layer just above the natural surface, the tension between the layers, and the intervention of Mother Nature…..

She layers pockets of fairly silent crusty rotations and rising, then disappearing pitch. This evolves into a most pleasantly strange set of effervescent tiny explosions and motorized reverb. A very active piece that rattles the rafters with experimental shifts that are delightfully unexpected. But these shifts are deliberate, and have a paced build, but the end results are abstract in design. The quieter moments add for expectation. With each pitter-patter the listener may wonder what exactly is happening under the hood. Though only Jean holds the master key, and this piece keeps you guessing like a classic thriller. As you may feel safe in the shallow darkness, watch your head as the final few minutes become a frenzy on sonic discordance.

The literary inspired Out of Joint follows and “is an essay in sound hybridization on Shakespeare’s Macbeth and the various silver screen adaptations, stagings and rewrites it inspired through time.” What starts to sound like footsteps on wet pavement suddenly becomes a dark cavern, another pocketful of mystery. This shaking, quaking sound is evocative of spray paint being readied for a proper back alley tagging, and the sudden roaring explosion leads to a distant thunderstorm. This reminds me of the weather of late in North Texas, going from a rather calm day into unpredictable, instant storm flashes. Not unlike a car crash, sudden, random. But Jean adds an uncertain panache that leaves you on edge. A distinct rumble, like she’s altering the rotation of the planet axis to move mountains. Though it’s the core of this drone that builds and froths with great control. And suddenly it stops to a simple refrain of broken microsounds.

It’s here at midpoint that the composer finds the wherewithal to deconstruct the cacophony, adding breathy billows of rolling effects that disguise the actual instruments. Instead she opts for the sounds of a ride at La Ronde (Christian Bouchard) and the brittle sounds of ice on frozen lake (Mario Gauthier). It’s a fascinating set of parameters without bounds. And flash to a whole flock of geese cackle away from fore to background. A breathtaking moment in this piece.

This is the type of work that will keep you thinking on your toes, scratching your head in observation of the wonderment of velocity and scope of imagination. In the end this crackles away into a small fire, and other daily field recording observances, perhaps even fumbling inside a pocket. This set of Troubles will leave most of you breathless.

This set of Troubles will leave most of you breathless.

Montréal-based composer Monique Jean’s take on electroacoustic music has been described as “engaging a present that happens now.” Credit François Couture with that sharply written phrase. Indeed, there is an abrasiveness to her work that feels urgent and forceful. Her new release Troubles features two vivid examples.

The first is T.A.G. The title is an acronym for trottoir, asphalte, goudron, which translate as sidewalk, asphalt, tar. The 2013 composition is a study of demonstrators and the dynamics of crowds.

Unlike Amethyst Seer’s excellent 2017 work Protest, this doesn’t feature an actual recording of a demo. Instead, Jean interprets the subject matter. In doing so, she delivers a more accessible piece of music.

All the tension and fluidity of motion you’d expect from a protest-themed work is there. But its relatively vague reference points encourage appreciation of the work on a more emotional level. This is a consequential, timely effort — one that resonates even more deeply four years after its composition.

The second half of the album features Jean’s 2009/2011 piece Out of Joint. In the album’s notes, she describes it as “an essay in sound hybridization on Shakespeare’s Macbeth and the various silver screen adaptations, stagings and rewrites it inspired through time.”

Again, her decision to avoid a literal interpretation serves to broaden the work’s appeal. Yes it is about Macbeth. But it also works as a piece about iterations or interpretations.

Big themes. But they’re all within Jean’s reach. Her work has an outsized quality that — with a bit of promotion — could have influence beyond the confines of electroacoustic fandom.

Her work has an outsized quality…

Since more than twenty-five years Empreintes Digitales is probably the leading label when it comes to computer based electroacoustic music, mostly composed and performed by conservatorium skilled composers. Oddly enough I don’t see a reference to those in the short biography that is printed on the cover of the album by Monique Jean. She was selected by several competitions (which I think is THE thing in this musical area) and played international concerts and festivals. She has here two pieces of which the first, T.A.G., which stands for ‘trottoir, asphalte, goudron’ (sidewalk, asphalt and tar) is inspired by “crowds of demonstration” and she says that sounds are “mainly synthesized”, which I found hard to believe. I was more thinking about heavily processed field recordings, certainly in the opening section of the piece that sounded like car tyres screeching. I might be wrong of course. As the piece evolved it became more obvious that there are indeed synthesized sounds used and even some more orchestral ones towards the end. It’s a massive piece, crowded with many sounds, as crowded as the pavement of the inner city perhaps. This is quite a powerful piece of music. The other piece here is Out Of Joint, and it is a “sound hybridization on Shakespeare’s Macbeth and the various silver screen adaptations, stagings and rewrites it inspired through time” — whatever that means but “what I am trying to do instead is to develop a form that operates through grafts of time, interpretations, meanings and references”. Which I guess wasn’t helpful either. Here the piece is also computer based I would think as well as dense, slightly distorted from time to time, a massive narrative perhaps; again I could have been fooled it included field recordings as I distinctly heard some birds. Both pieces are quite good and seemed removed from the more usual glissandi approach that was common with releases on this label some years ago. Either the composers have moved on, or the label did. […]

This is quite a powerful piece of music.