Often in my works I like to layer multiple soundscapes that have been recorded in different environments and situations. I enjoy listening to the subtle transformations in timbre and the way the sounds merge and mask each other when I layer multiple environmental recordings. I find it interesting when different social connotations arise as the layers fuse together and collide. This creates a kind of contextual ambiguity that might evoke different connotations for different listeners. There is also a spatial counterpoint that occurs — even in the stereo realm — as the binaural spatial information from multiple recordings are layered.

In this release, the notion of spatial composition is taken a step further. Instead of just working with the existing stereo imagery in the soundscape recordings, I have created multiple layers of spatial movement and placement by using the NAISA Spatialization System and the Holosonics Audio Spotlight directional speaker. Developed with Benjamin Thigpen the former is a real time gestural system for performing spatial movement using the Polhemus Patriot 6D magnetic sensor and Thigpen’s spit~ spatialization patch that runs in Max. The Audio Spotlight was modified to fit inside a frame with handles that a performer manually moves in order to direct the illusory path of a narrow beam of sound. Elements of the pieces River Valley Snapshots and … while walking and working were performed using the Audio Spotlight in this way and recorded using an Ambisonic Microphone array engineered by Hector Centeno. In the recording process we explored recording the Audio Spotlight at various sites in order to experience how the spatial movement responded in different acoustic conditions. Some of these sites include in Ontario, Canada an empty barn in Machar, outdoor environments in Lount Township, the large living room with vaulted ceilings at Warbler’s Roost Country Inn in Lount Township, and the Geary Lane performance venue in Toronto that has a cyclorama wall. The two spatialization techniques were combined to create an ensemble approach to spatialization which is quite uncommon in electroacoustic sound art presentations.

The opportunity to adapt this listening experience to a stereo playback experience is another layer of production in the creation of this audio release. The stereo mapping of the multi-channel spatialization and the Ambisonic recordings of the Audio Spotlight performances has been done using a combination of the ATK Ambisonic UHJ Stereo recorder and the Ambisonic Studio Solo2B B format panner. 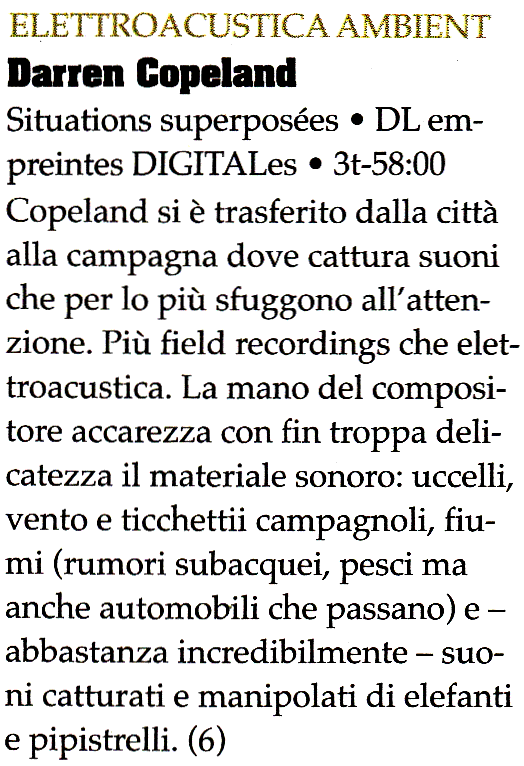