This item is not available through our web site. We have catalogued it for information purposes only. You might find more details about this item on the Confront Recordings website. 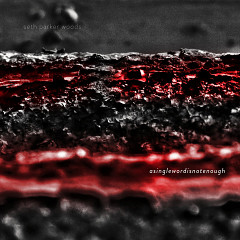 Company is a state of being here, on an album which speaks in worlds.

In Edward Hamel’s Gray Neon Life the cellist is his own companion, uttering words which are not so much spoken over the music as sprayed on and under it, made both surface and core: adornment and essence. This double figure – cellist and voice in one – is Seth Parker Woods, and the piece in both concept and execution is a vehicle for his co-creative input, ranging from the precise choice of pitch material to the derivation of the texted component from the SAMO© tag of Jean-Michel Basquiat’s and Al Diaz’s New York street art, of which Woods is an aficionado. What Hamel makes from it is a sort of manifesto for city life and city art, summoned into existence by a harmonic double stop which, recurring as a fourfold refrain, finally offers a tentative way out… or on.

On, at first, into a hall of mirrors. The three remaining works on this album – two of them, like Gray Neon Life, written for Woods – surround the cello with electronically produced sounds, and in the first two, by Michael Clarke and George Lewis, these sounds are derived in real time from the cello’s own material. In Pierre Alexandre Tremblay’s asinglewordisnotenough3 (invariant) the sound sources are more diverse, and yet the work’s worlds are again conjured forth by this lone yet multiple figure. Here he is at the centre of it all: muse and master of ceremonies, devising it all for company.

When writing about Seth Parker Woods’ HCMF 2016 performance, I demurred at some of the pieces in his recital, but I found myself eating those words when hearing them again in these recorded versions. Edward Hamel’s Gray Neon Life has something fascinatingly analytical about it, as though it’s peering into the makings and/or articulation of an idea, while the non-stop activity in George Lewis’ Not Alone is seriously engaging, continuously changing its character and attitude such that cello and electronics seem to keep assimilating each other. Michael Clarke’s Enmeshed 3 puts a melodic urge through a dense network of inhibiting machinations—and then there’s Pierre Alexandre Tremblay’s asinglewordisnotenough3 (invariant), of which I’ll simply restate my original response, as true of this piece in particular as it is of Woods’ performance throughout this splendid album: “a composition masterclass in its seamless, aurally non-hierarchical interaction between acoustic and electronic, as well as a performance masterclass in its bravura display of frantic virtuosity from Woods.”