A potentially bewildering multiplicity of elements is elevated beyond the cacophony of Babel to reveal shared needs, aspirations and desires that underlie wide-ranging cultural practices and preferences. — The Wire, UK

We have enjoyed previous releases Growl and Necropolis by Åke Parmerud, the Swedish electroacoustic composer, and now we have Grains (empreintes DIGITALes IMED 18150), the latest collection for this label. As before, we have the monochrome high-contrast sleeve art which appealingly plays with digital “textures” and explores its own imaginary spaces. This time we’re hearing some earlier gems form his 1990s catalogue. The main event might be Grains of Voices, a 1994-95 composition that was commissioned by Swedish radio as a dramatic form of sound-art; we might consider it radiophonic almost, were it not for the lack of a clear linear narrative. Instead, Parmerud is making a generalised statement about the diversity of the human race, by using sampled, found and recorded voices from around the world. He intends thereby to present as much information as he can about the human spirit in a deep / wide sweep; I like the idea it might be seen as “vocal graffiti”. It’s all about different languages and cultures, yet the basic idea is to reveal some commonality, something about our shared humanity. On paper, this may sound a bit “worthy”, like some committee-designed UNESCO statement about mankind, but sonically speaking it’s a compelling jumble with plenty of rich detail; and it refuses to draw any conclusions about what these artificial patterns in sound might mean. As ever with this composer, the craft of assemblage is pretty immaculate; not a wasted moment, lots of concrete events; it’s as much a vocal mosaic as a wall of audio graffiti.

More human voices on Les objets obscurs taking us even further back to 1991. This is intended as an “audio riddle” in four parts; at one level, we’re invited to guess what we might be hearing as we work through these four short works, plus there’s a friendly French-speaking woman adding some context at the start, with a further textual riddle (I think she’s pretty much asking “what am I?”, but it sounds so much better in French). All of this was done to pay homage to the INA-GRM foundation, which Parmerud respectfully regards as a “very honourable institution”, and which prompted him to try and emulate the historical traditions of musique concrète. Duly noted, but I would say he’s also emulating the surrealist René Magritte at his most playful; I’d say it’s legitimate to “read” a Magritte painting as a visual riddle, of sorts, and everyday objects were massively important to his visual lexicon. Parmerud’s suite contains the “solutions” in the final part, but the answers conceal more than they reveal, and are also intended to set us a new riddle, one without an answer. How metaphysical!

Still more voices on Alias, a 1990 work which, in a very oblique manner, is attempting to say something about the life and music of Carlo Gesualdo. This Renaissance composer of madrigals is the gift that just keeps on giving, not just to lovers of that genre but also to composers and conceptualists. In 2017, for instance, we noted Alessandro Bosetti with his Gesualdo Translations work, a very bold statement using amateur singers that really challenged our received wisdom about the “chromatics” that have made Gesualdo so famous. Parmerud’s take on the subject is a bit more elusive; the first part remakes a John Dowland song, in order to raise questions about that most fraught of subjects, the relationship between the creator and the work of art. The second half samples some Gesualdo motets, fragments and processes them in an electroacoustic way and blends in music from the first half, thereby attempting to x-ray the inside of Carlo Gesualdo’s brain. Highly effective; even if you have no interest in the subject matter listed above, the musical process here does indeed create convincing impressions of the way the human brain might operate. Fascinating.

Fascinating.
A potentially bewildering multiplicity of elements is elevated beyond the cacophony of Babel to reveal shared needs, aspirations and desires that underlie wide-ranging cultural practices and preferences. 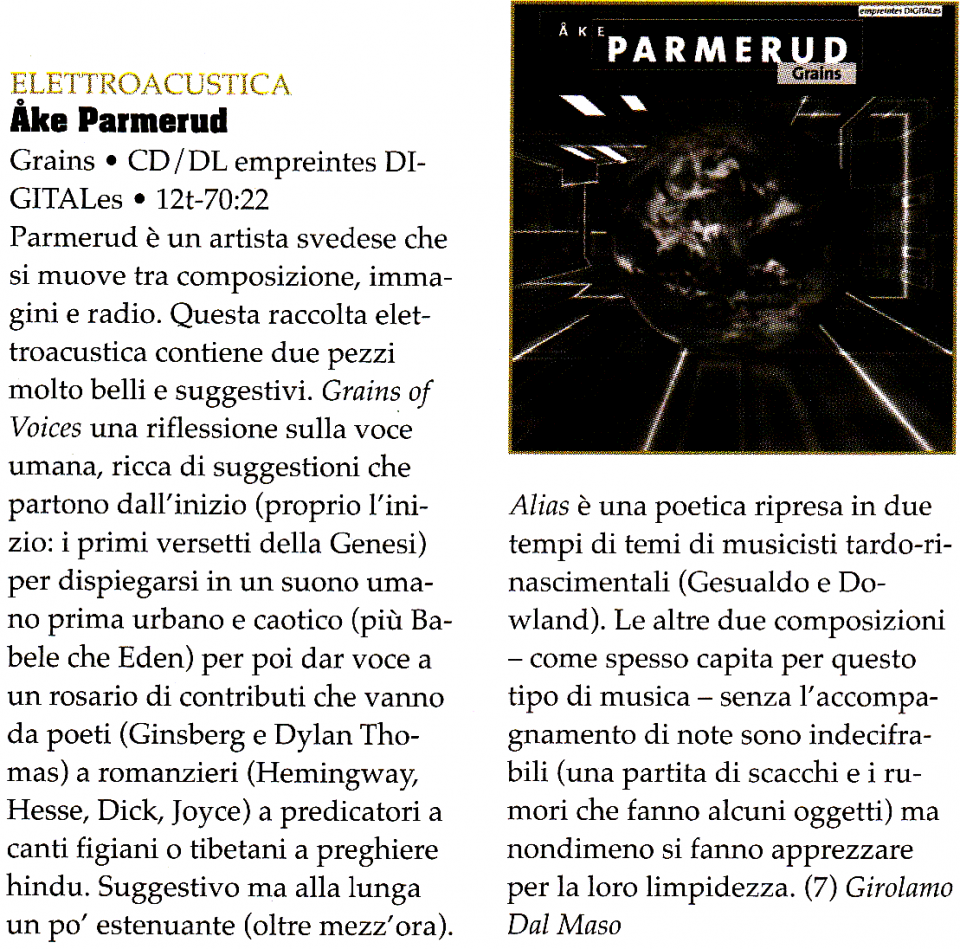 Grains of Voice, originally released more than two decades ago, is still one of the most powerful and conceptually interesting pieces of this entire selection of music. Parmerud’s own written summary of the work is fascinating, detailing his efforts to record different human voices from all over the world (the total duration of recordings Parmerud made during his journey approaches 20 hours!) and create a piece that ventures into several ideas, or ‘islands,’ amidst a continuous flow of sound. The composer’s treatment of the voices results in dark, sonorous waves, grounded by recognizable elements — for me, the most notable of these was an appearance of Ginsberg’s Howl. The other concepts are no less enthralling, what with the auditory riddles of Les objet obscurs and the philosophical musings of Alias.

Grains of Voice, originally released more than two decades ago, is still one of the most powerful and conceptually interesting pieces of this entire selection of music.

Sweden’s Åke Parmerud has assembled four acousmatic works dating between 1990 and 1995 on a must-have collection of out-of-print recordings. (Acousmatic is an electroacoustic subgenre composed for presentation with speakers rather than live instruments.)

These powerful, sometimes disturbing recordings all date back to the mid-1990s. Thematically and artistically, each has maintained extraordinary relevance.

Grains of Voices came out of an invitation to produce a piece of music drama for Swedish Radio. “I decided to make a composition concerning the human voice, its symbolic implications and its musical applications,” writes Parmerud in the album’s notes. “The sound of the voice is a striking symbol of the unity of mankind.”

He recorded the voices in-person, inviting speakers and singers to share anything they wished. “This way I did not (with a few exceptions) control what went into the composition, only what came out.” Parmerud describes the 31-minute work as “a multilayered, cross-cultural hybrid piece of sonic art.”

Jeux imaginaires (or Imaginary Games) was inspired by the 1992 World Chess Championship match between Anatoli Karpov and Garry Kasparov. Aside from a middle section that sounds like a frenetic game of park chess, the work is a study of the parallels between the game and composing music.

“Every night after ending my composing session in the studio I played the game (or maybe only a few moves) on my portable chessboard. Apart from it being a nice way to turn my attention away from pure musical problems for a while, I found that playing the game made me more and more aware of the likeness between chess playing and composing. … [P]laying the game as a small ritual every night released new musical ideas and composing energy without necessarily creating detectable parallels between the music and the game itself.”

We’re presented with riddles (in French) having to do with the source of the sounds used. The answers are offered musically. “In the end of the last movement the ‘solution’ of all the riddles is presented. These answers, however, set up a new ‘inner’ riddle, to which no answer is given.”

Finally, Alias explores “the duality of outer and inner existence, here interpreted through the life, music and destiny of the Renaissance composer Carlo Gesualdo da Venosa (1560-1613).”

Gesualdo is a controversial 16th/17th century figure. As a composer, he’s considered to have been hundreds of years ahead of his time. As a human being on the other hand, he’s remembered for the gruesome double murder of his wife and her lover.

“ Alias is not, however, an attempt to illustrate the shifting identities of Gesualdo,” writes Parmerud, “but is rather, in a wider sense, inspired by thoughts on the relationship between the artist and the work of art.”

That being said, it’s difficult not to let the mind wander over the course of these two dramatic movements. Like the others on this important new compilation, it is a powerful work.

… it is a powerful work.