… the work of sound processing, his way of extracting all forms of textures […] and above all of directing them with finesse and sensitivity, all this makes this disc […] a work to be discovered… — Revue & Corrigée, France

… the work of sound processing, his way of extracting all forms of textures […] and above all of directing them with finesse and sensitivity, all this makes this disc […] a work to be discovered… 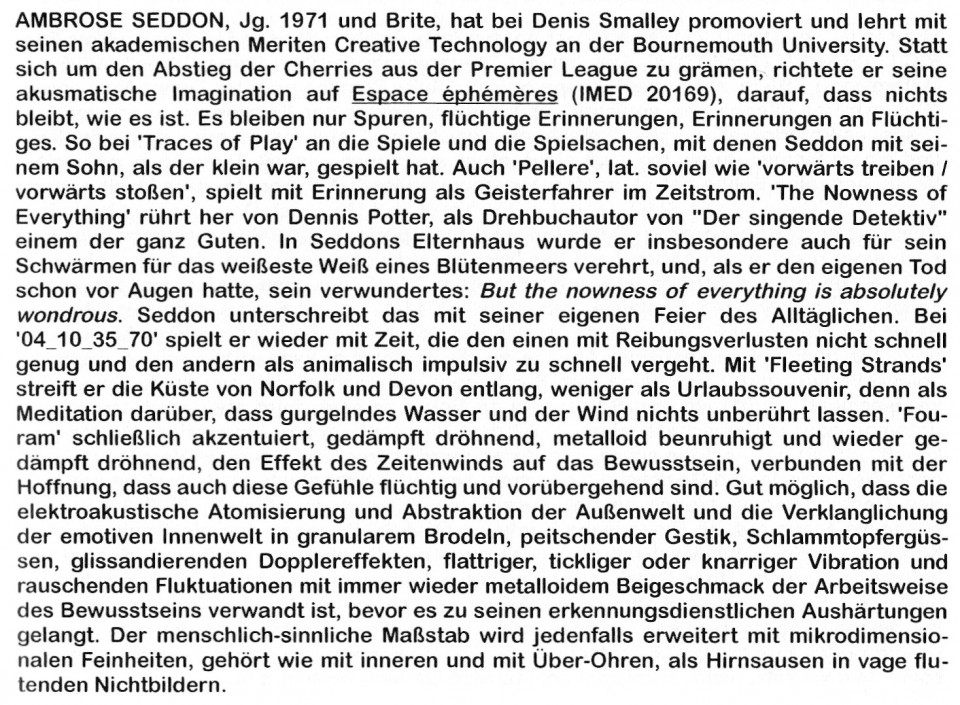 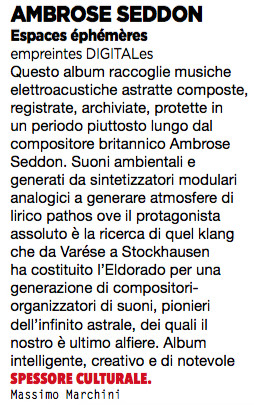 … needs more than one listening to reveal all its nuances and to be fully appreciated.

An exciting work with a crystal clear sound quality, which is a pleasure to listen to at the right time.

Espaces éphémères is a collection of six standalone pieces from electroacoustic artist Ambrose Seddon, each with their own rationale and, according to the sleeve notes at least, without any overt linking theme or approach. Despite this, and despite the pieces dating from between 2005 and 2017, there is a sonic consistency here that makes it hang together nicely as a 73-minute listening experience.

With the sparse, gritty washes of Traces Of Play, pulling apart the percussive sounds and electronic bleeping of toys and wallowing in extremely deep and extensive reprocessing and sonic twisting, and the similar approach to reworking everyday ambience in The Nowness Of Everything, there’s a persistent sense of space and flow that makes you question your usual level of background sonic radiation. Very mild noises, gently glitched and stretched in time, stuttering like echoes from more energetic electronica, roll like textures in mostly very sparse atmospheric frames — none more so than 2005’s Fouram.

Despite its sombre accompanying notes, time seems to be treated somewhat more playfully in 10_35_70 with its gradual ramping and abrupt drops. While many of the pieces involve the expression of long, sea-like waves, Fleeting Strands is reportedly the only piece that’s overtly coastal, based on recordings of Norfolk and Devon. Of course it’s unlike any other audio postcard you’re likely to hear of the area, yet somehow the sense of holiday still persists, despite it also feeling like the tensest piece on this release thanks to some long metallic strung-out notes with subtle horror connotations.

It’s a sombre and at times glacially slow set of pieces, but with a nuanced texture that really draws the ear in and helps you to appreciate the small sounds and details. Though essentially a collection of old works, for many it may strike a chord with 2020 lockdown and the newfound senses of slow and distant that have been forced onto many of us. It’s not revolutionary, but it’s gently powerful.