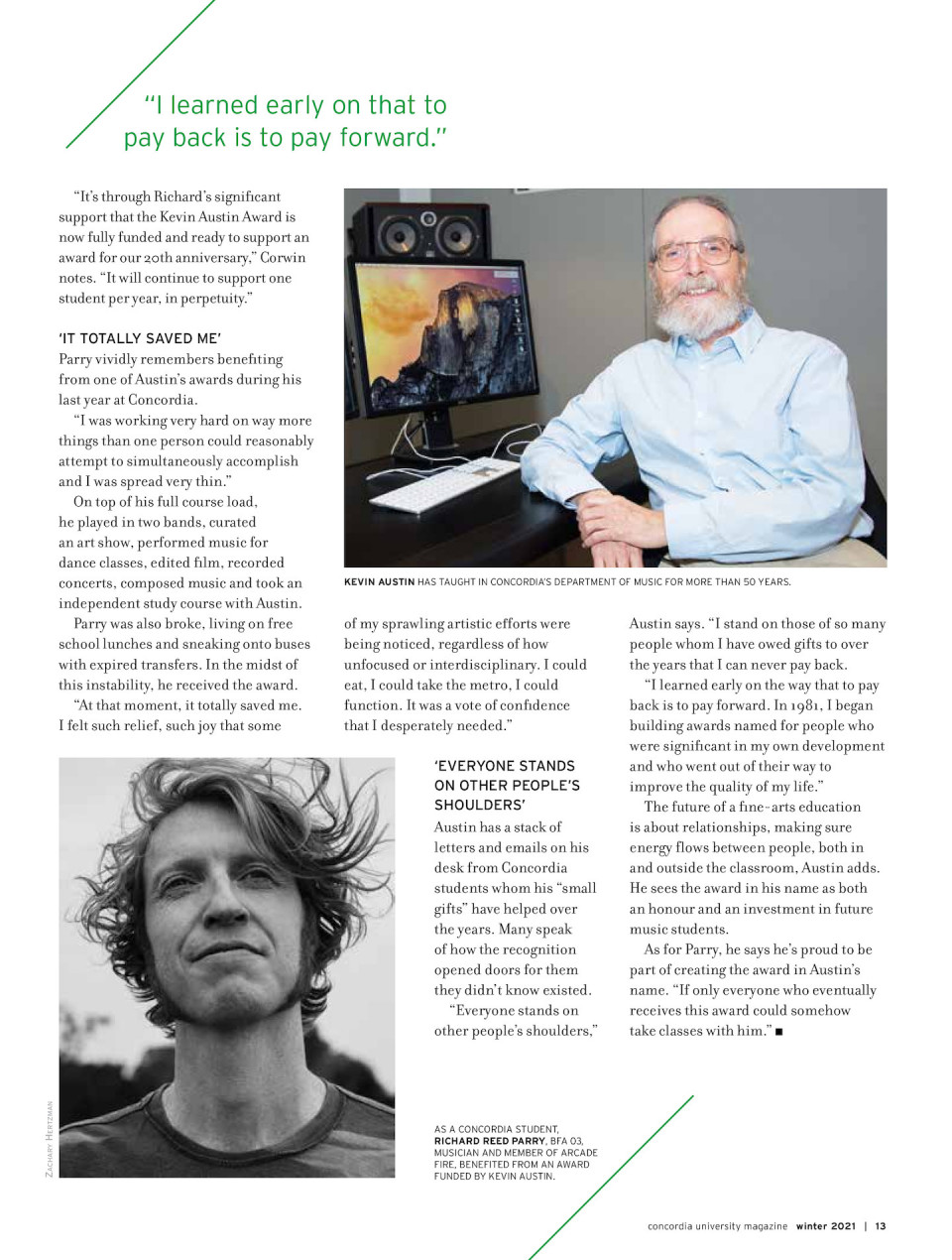 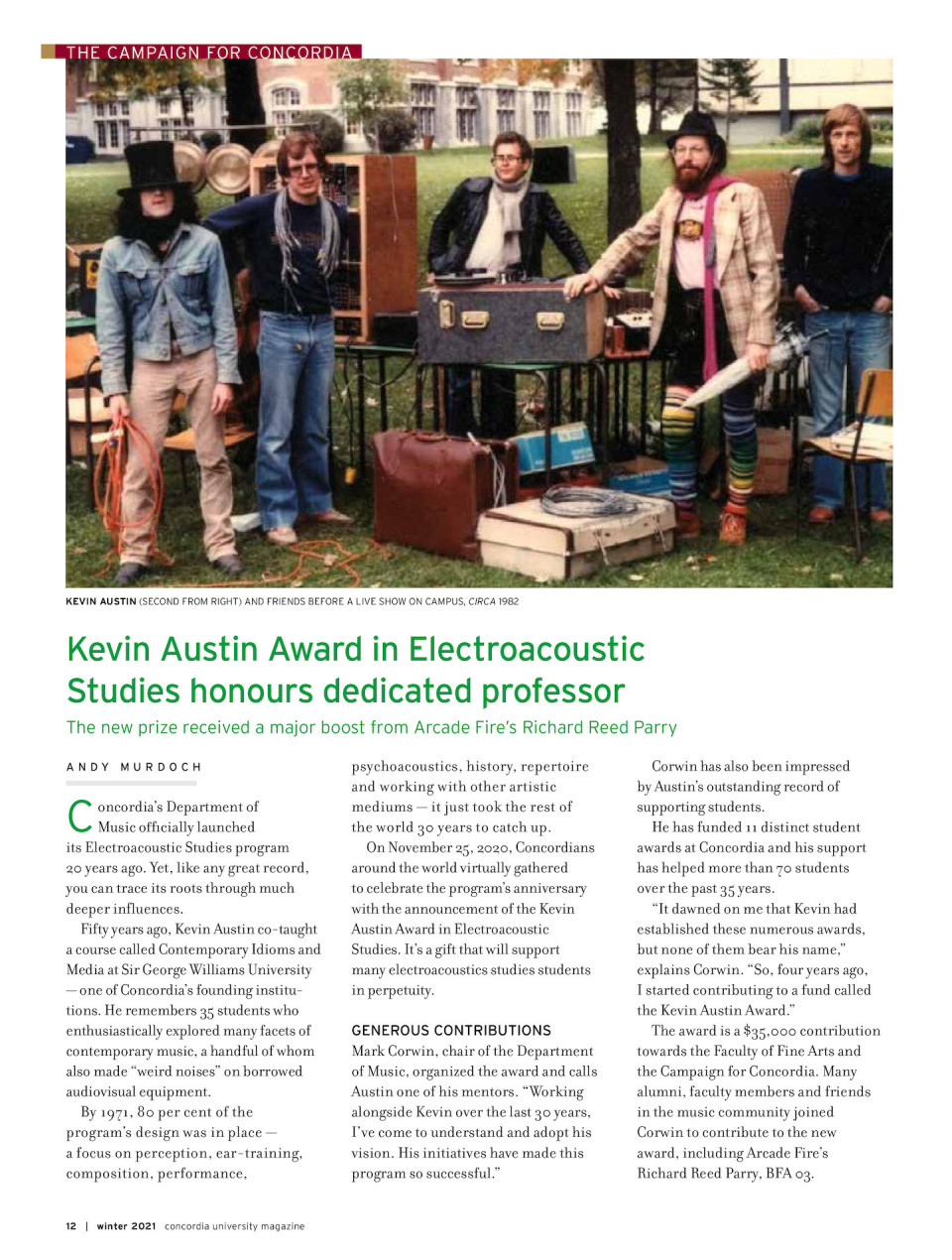 Concordia’s Department of Music officially launched its Electroacoustic Studies program 20 years ago. Yet, like any great record, you can trace its roots through much deeper influences.

Fifty years ago, Kevin Austin co-taught a course called Contemporary Idioms and Media at Sir George Williams University — one of Concordia’s founding institu- tions. He remembers 35 students who enthusiastically explored many facets of contemporary music, a handful of whom also made “weird noises” on borrowed audiovisual equipment.

By 1971, 80 per cent of the program’s design was in place — a focus on perception, ear-training, composition, performance, psychoacoustics, history, repertoire and working with other artistic mediums — it just took the rest of the world 30 years to catch up.

On November 25, 2020, Concordians around the world virtually gathered to celebrate the program’s anniversary with the announcement of the Kevin Austin Award in Electroacoustic Studies. It’s a gift that will support many electroacoustics studies students in perpetuity.

Mark Corwin, chair of the Department of Music, organized the award and calls Austin one of his mentors. “Working alongside Kevin over the last 30 years, I’ve come to understand and adopt his vision. His initiatives have made this program so successful.”

Corwin has also been impressed by Austin’s outstanding record of supporting students.

He has funded 11 distinct student awards at Concordia and his support has helped more than 70 students over the past 35 years.

“It dawned on me that Kevin had established these numerous awards, but none of them bear his name,” explains Corwin. “So, four years ago, I started contributing to a fund called the Kevin Austin Award.”

The award is a $35,000 contribution towards the Faculty of Fine Arts and the Campaign for Concordia. Many alumni, faculty members and friends in the music community joined Corwin to contribute to the new award, including Arcade Fire’s Richard Reed Parry, BFA 03.

“It’s through Richard’s significant support that the Kevin Austin Award is now fully funded and ready to support an award for our 20th anniversary,” Corwin notes. “It will continue to support one student per year, in perpetuity.”

‘It Totally Saved Me’

Parry vividly remembers benefiting from one of Austin’s awards during his last year at Concordia.

“I was working very hard on way more things than one person could reasonably attempt to simultaneously accomplish and I was spread very thin.”

Parry was also broke, living on free school lunches and sneaking onto buses with expired transfers. In the midst of this instability, he received the award.

“At that moment, it totally saved me. I felt such relief, such joy that some of my sprawling artistic efforts were being noticed, regardless of how unfocused or interdisciplinary. I could eat, I could take the metro, I could function. It was a vote of confidence that I desperately needed.”

‘Everyone Stands On Other People’s Shoulders’

Austin has a stack of letters and emails on his desk from Concordia students whom his “small gifts” have helped over the years. Many speak of how the recognition opened doors for them they didn’t know existed.

“Everyone stands on other people’s shoulders,” Austin says. “I stand on those of so many people whom I have owed gifts to over the years that I can never pay back.

“I learned early on the way that to pay back is to pay forward. In 1981, I began building awards named for people who were significant in my own development and who went out of their way to improve the quality of my life.”

The future of a fine-arts education is about relationships, making sure energy flows between people, both in and outside the classroom, Austin adds. He sees the award in his name as both an honour and an investment in future music students.

As for Parry, he says he’s proud to be part of creating the award in Austin’s name. “If only everyone who eventually receives this award could somehow take classes with him.”