Nicolas Bernier is joyfully flowing from musique concrète to live electronics, post-rock, ambient, glitch, field recording, improvisation, performance, installation, art video while also working with dance, theatre and cinema. In the midst of this eclecticism, his artistic concerns remain constant: the balance between the cerebral and the sensual, and between organic sound sources and digital processing. The sound of Nicolas Bernier is somewhere between the old and the new. It is electronic music made from objects of the past: typewriters, old machines, tuning forks, soundscape memories, and, yes, musical instruments. It is made with a modern apparatus but feels like completely handmade. It is gently articulated textures alongside enormous masses.

His work has been of interest for Prix Ars Electronica (Austria), SONAR (Spain), Mutek (Québec), DotMov Festival (Japan) and Transmediale (Germany) and has been released on lovely labels such as Crónica (Portugal), Ahornfelder (Germany), leerraum (Switzerland), and Home Normal (UK).

He his currently a PhD candidat in sonic arts at the University of Huddersfield (UK) under the direction of Pierre Alexandre Tremblay and Monty Adkins. He his a member of Perte de signal, a media arts research and development centre based in Montréal.

For his work frequencies (a) he is awarded the Golden Nica of Prix Ars Electronica (Linz, Austria, 2013). 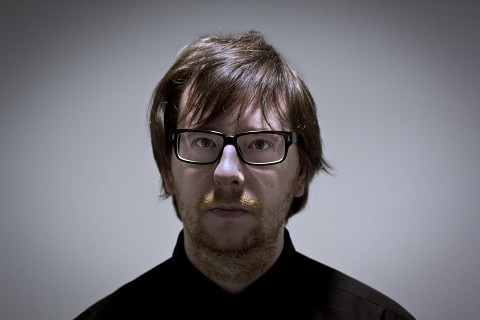 Montréal-based sound-artist, performer and composer Nicolas Bernier recently dropped a new release on the label of Acte community (grouping some experimental sound artists on an edge of innovation, who are active in Montréal area). According to the introduction by the label, Transfert / Futur, the title of this release “marks a shift from Nicolas Bernier’s rather reductionist approach of the previous series to a more expressive and colorful aesthetic.” We tried to find out the reason by talking to its author.

Chain DLK: Hi, Nicolas! How are you?

Nicolas Bernier: Fine! In the middle of the electronic music students concerts at Université de Montréal, so my head is (even more) overloaded with sounds this week!

Chain DLK: Before focusing on Transfert / Futur, some introductory words for the readers who don’t know you… first of all, how did the spark for experimental music (if you agree with such a way of labeling it) become a fire?

Nicolas Bernier: I think the desire for experimentation, to get out of the common musical formulas, has always been there. For instance, even when I was doing folk music (among other punk, post-metal, and every conceivable rock variation) when I was a teenager, I was the one plugging effects, pedal and distortion and playing progressive patterns on my, well, mandolin! Just the fact of playing the mandolin was experimental in the era of power trios.

I am totally fine with the term “experimental.” I actually quite like it, as it puts forward the ideas of trying things to get to a result, on the experience, on the sensitivity, which is one of the main reasons to make music or art. There is no experimental aesthetic, per se; it’s more a state of mind before anything else.

Chain DLK: You said Transfert / Futur is the beginning of a new stage in your artistic and creative path… could you tell us something about the previous stages and the way they interrelate with the present time?

Nicolas Bernier: … And maybe not a long stage, to be honest. I don’t know yet, but I don’t think it will live 7 or 8 years like the previous “frequencies” cycle of works. All my creative cycles are reacting to the previous one. The frequencies were following cycles based on machine and field recordings, so I wanted to avoid this noisy universe to get back towards more basic sounds. The starting point was the sine wave of the acoustic tuning forks, but also the electronic sine wave and micro-sounds.

The funny thing is, while my projects are reactions to the previous ones, the previous will always be included in one way or another in the current ones. The title Transfert / Futur is, in the first place, a way to talk about science fiction, which is the main topic of this new series. But, on a more technical and personal level, it is also a transfer of the previous series within a totally new context. The piece Transfert (299 792 458 m/s) started out by transferring to synthesizers the midi sequences I used in the very first piece performance of the frequencies series. The second piece, Futur (299 792 458 m/s), also started from an old, unused and unfinished synth-based composition that was actually my very first midi sequence I made around 2013, I think (before that date, I was refusing to work with midi and synth, working only with field recording in a musique concrète perspective).

Chain DLK: How many diapasons do you own? What’s the oddest one, and why?

Nicolas Bernier: That’s a good question. I’ve got a couple of drawers full of them, old to new, metal to aluminum, brown to silver. But I’d say around a hundred.

Most of them are just boring tuning forks, but there are a couple that are more interesting: a huge 30 Hz tuning fork, for instance, or the stroboscopic ones, or an old one from the Max Kohl Chemnitz company that was one of the main scientific apparatus suppliers in the late 19th century. But there is one I have a really special relationship with: the Secretan one. Secretan was the company who was commissioned for the official international pitch A=435 Hertz tuning fork in 1859 (before the norm was set to 440 Hz), the “diapason normal.” The tuning fork was once a really serious scientific and musical topic, and the official one was kept in a controlled environment so it’s frequency wouldn’t change over time; it was the Mother of all tuning forks. I don’ t remember how a Secretan tuning fork ended up in my collection one day, and since then, each time I open that drawer, I fantasize about having one of the most important artifacts of music history. But, I mean, it’s really just me inventing stories, as it is probably just another anonymous tuning fork.

Chain DLK: Most of the artists dealing with pure sounds or frequencies I spoke with told me they developed a sort of idiosyncrasy for “dirty” noises… What’s your relation to sound and noise?

Nicolas Bernier: With the frequencies series, I wanted to look towards some kind of purity… while staying well aware that I would never find it. And, frankly, I am not that interested in purity; I am usually more looking for equilibrium between elements. This search towards purer sounds led to a certain clarity in my artistic proposals, I think. I am not a sound racist: all sounds, whether purer or noisier or everything in between, can be of interest. It’s more a matter of how you organize your ideas and elements together.

Chain DLK: Did you use any of the machines you previously built on Transfert / Futur?

Nicolas Bernier: Nope. This album is 100% digital virtual synthesizers. So, pure in a way, but dirty at the same time in the way the elements are organized.

Chain DLK: Well… why did you quote the speed of light in the titles of Transfert / Futur? Any sci-fi-like reverie?

Nicolas Bernier: Basically, all my projects reflect my obsessions (my life is made of obsessions that usually stay for a couple of years, and then leave space for a new obsession and therefore a new series of projects). For the last couple of years, I’ve been obsessed with science fiction. Before 2014, Tarkovsky’s Solaris and Kubrick’s 2001: A Space Odyssey were basically 100% of my relationship with sci-fi, nothing else. But then I got hooked and I’ve been watching, reading and dreaming about parallel worlds, lasers, and humanoïds since then.

With the first project of the series was an installation where I wanted to recreate the feeling of the space travel scene at the end of 2001. So this is why I chose the speed of light as the main thread in the project, because my aim is to reflect those travels at light speed, those transfers to parallel zones, those spaceships full of neons and blinking control panels. And, well, the speed of light is saying that, as in my previous projects, I am still working with light, but with a different angle, a different sub-topic.

Chain DLK: The idea of attaching an interview (in French and English) in the booklet is pretty good…

Nicolas Bernier: I think so, too! It is something the label, Acte, really wants to keep in all their releases. It gives some content, some sense in releasing music in this era of unlimited downloads. A pretty exciting new label from Montréal, by the way, with a quite open-minded vision of what music should be in this 21st century.

Chain DLK: Most of the sounds in the second track synthèse (299 792 458 m/s) reminds me of something I did ages ago by short-outing circuits of some old drum machines… how did you create the sounds you included in this track?

Nicolas Bernier: This is quite interesting, as it is one more proof that the nature of the tools doesn’t really matter, whether they are analog or digital, old or new. Because, like I said earlier, this piece is 100% virtual synthesizers. No short circuits. All “clean” and planned, but composed in some kind of dirty ways that make it feel a bit improvised or out of control, even though it’s the complete opposite.

Chain DLK: Any word about the first half of Transfert / Futur?

Nicolas Bernier: In reaction to my previous series, one of the intentions of this new one is to NOT be conceptual, and transfert (299 792 458 m/s) is a good case in point. While I flirted with pop elements in my first releases a decade ago, I have always been away from the four on the floor type of music. This piece is a long ascension aiming to place a kick drum on every beat. In the end, the 4/4 stays a bit disarticulated, but we are pretty much as close as I get to more conventional rhythmic electronic music (aside from the scores I made for modern dance pieces, maybe). So it’s kind of a return to more intuitive and more physical music.

On the other hand, the visual, scenographic, installative or performative aspect is often an important component in my work these days. The music was composed beforehand and should then be able to live by itself as music, but in the end, it is also an audiovisual performance that pursues those science-fictional ideas. There is a glimpse of the performance here: https://vimeo.com/242128789.

Chain DLK: How are you going to move this new series of releases forward? Any installation in progress or in your forthcoming plans?

Nicolas Bernier: I worked for years on a quite important installation project, but for some reason (mainly financial) I had to abandon it. I’ve got tons of other ideas, but as soon as your projects rely on the fabrication of tangible devices, it gets complicated technically and financially. So the future will tell.