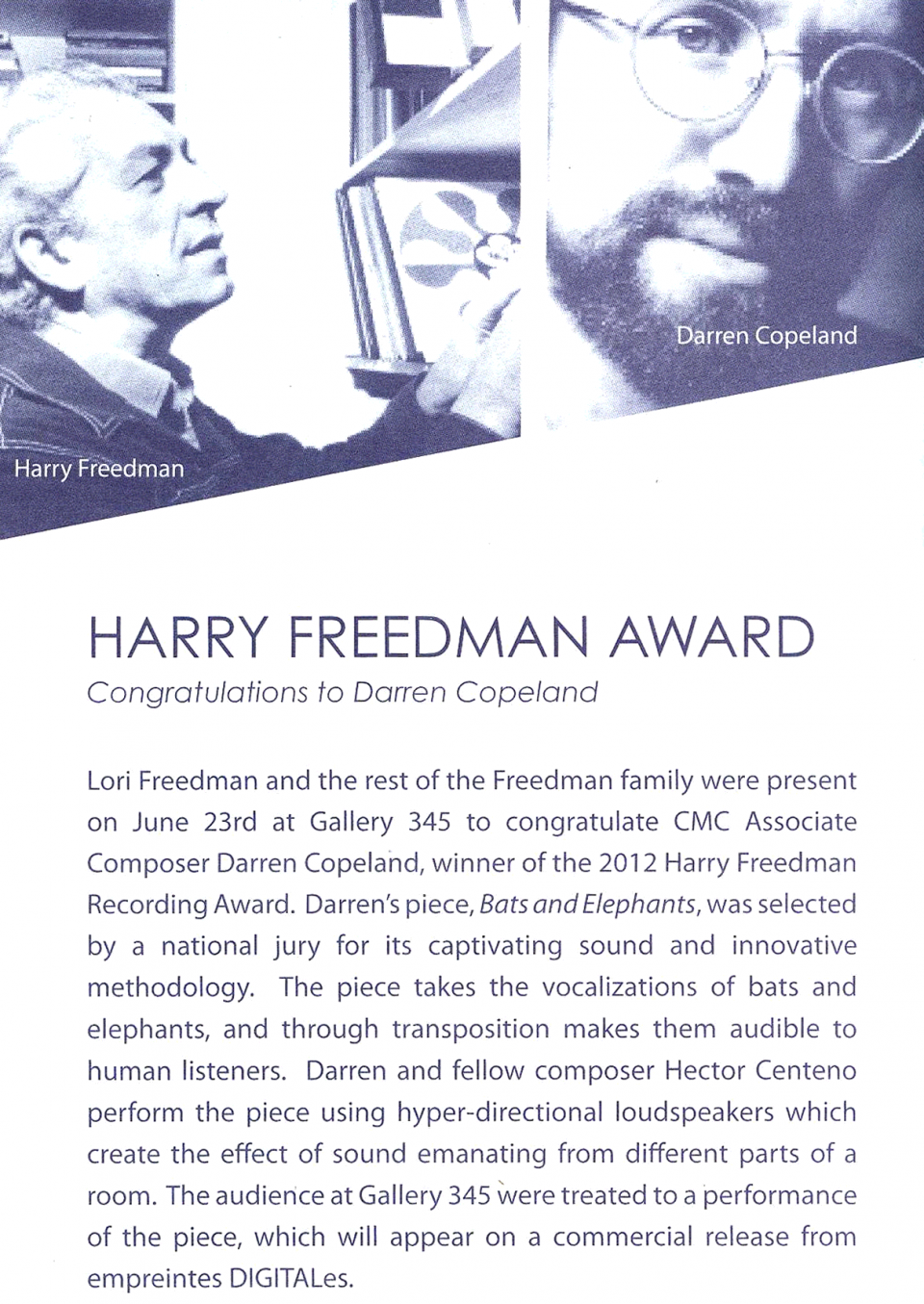 [Darren Copeland] was selected to receive the Harry Freedman Recording Award by a national jury.

The trans_canada festival of electroacoustic music by Canadian composers at the Zentrum für Kunst und Medientechnologie (ZKM) in Karlsruhe was certainly no everyday experience for the interested German public. A festival of acousmatic music—and acousmatic music only—is quite unusal. The German avant-garde music scene is still uncommonly lively, but most composers prefer either instrumental music (with electroacoustic elements) or multimedia works. The idea of invisible music seems not to touch the German musical sensibility.

Despite this, 460 visitors found their way to ZKM. During 10-13 February, 2005, they experienced a four day-long plunge into the Canadian way of composing, and had the opportunity to learn more about the “Canadian Example” as Daniel Teruggi of the Groupe de recherches musicales (GRM) called it in his paper. According to Mr. Teruggi, the liveliness and outstanding quality of the electroacoustic music scene in Canada is the result of good composers but also of academically sound research and training and a wide range of philosophical approaches to music. The opening of the festival showed another aspect of this “example.” Paul Dubois, the present Canadian ambassador to Germany, came from Berlin to open the festival—cultural policy in Canada apparently knows and supports the electroacoustic scene intensely, quite contrary to German policy.

Francis Dhomont, Robert Normandeau, Gilles Gobeil, Nicolas Bernier, Hildegard Westerkamp, and Louis Dufort took part in the festival and presented works (Ned Bouhalassa was invited but for health reasons was unable to attend). Nine pieces were commissioned by ZKM and received their world premieres at the festival.

trans_canada not only offered an occasion for Germans to learn about Canadian acousmatic music; apparently, it also connected the Canadians themselves. “It seems we had to come to the ZKM in Karlsruhe to get together,” said Robert Normandeau at the last concert. And so, the Francophone composers from the east, rooted in the Paris school of “musique concrète,” met the Anglophone soundscape composers from the West coast. “I was very much surprised when Francis Dhomont told us that he does not like the original sounds to be changed so much that you can’t distinguish their origin any longer,” said Hildegard Westerkamp. “We are not as far away from each other as I used to think.”

This proved to be quite true, as could be heard. The parallels between their new works, Brief an den Vater by Mr. Dhomont and Für Dich—For You by Ms. Westerkamp, were striking. Both compositions were not only inspired by but also formally based on literature and the structure, the sound, the rhythm of the text. The work by Mr. Dhomont, with the scraping of a pen as a sort of leitmotif, was no less abstract than Ms. Westerkamp’s music with its sea-sounds (gulls, wind, waves). And her fantasy land called “home” is not more “real” then his world of inner struggle. Both works showed an extreme sensitivity for subtle, delicate sounds which were spread in many layers, throwing shadows of sound, and constantly and slowly developing into new shapes and shades. The differences between the works seemed after all (to this listener at least) to be ones of personal style and expression than of basic principles.

Another new work with words came from Darren Copeland. I don’t want to be inside me anymore was quite singular in the festival due to its definite focus on content, on a “real story.” This fact gave the piece a strong dramatic quality leaving hardly any room for imagination. The intention of the sounds to build around the absorbing, sometimes even vexatious, words seemed to force the listeners to constantly keep their full attention on the meaning of the text. It was a deeply impressive piece, even if it was to a certain extent more dramatic than musical. (Although other listeners might experience it differently if they do not understand the German text.)

In a way, this work resembles a compositional style of a very different kind, that of Barry Truax. The connection may be found in the very sense of reality in both composer’s works: the reality of the feeling of isolation on one hand, and the reality of an existing landscape (streams, peaks, caves) on the other.

Even Gilles Gobeil’s magnificent medieval drama, Ombres, espaces, silences…, followed roughly this direction. This piece was not about feeling or landscape, it was about reality, too, in this case the reality of history, only by far more sublime, sensitive, and imaginative. Not “cinema for the ear” but a “novel for the ear” (something like The Name of the Rose?)! However, the form and structure of this work is by far more of a narrative nature than strictly abstract-musical.

It was Robert Normandeau and the youngsters of trans_canada who were most abstract, and therefore the strongest advocates of a true “invisible music.” It was not only not to be seen, it was not to be imagined. There was nothing real, nothing you could get hold of, it was more or less a complete deconstruction of sounds, ideas, narration. They appeared not to start from any landscape, be it imagined or real, inside or outside the head; they started from ideas, ideas of sound, ideas of form. Even the antique Writing Machine in the work by Nicolas Bernier was more a (slightly exotic) sound than a sense, more a historical reminiscence than an element of form.

Coincidence shows her unaccountable face, experiment and surprise follow. You could hear experience and mastery in the work of Robert Normandeau, of course. You were always sure that it was him who played with coincidence and not the other way round. His world premiere, ZedKejeM, was highly dynamic, with the energy and rhythm from a dancefloor, but still showed the deepness, density, and versatility of a deep-thinking organizer of energy and fantasy. Every single sound seemed well calculated, the effects carefully set.

The music of his younger colleagues, Mr. Bernier and Louis Dufort, was more spontaneous, wandering dreamily through all the possibilities of technique and sound, to find out what would happen. Mr. Dufort spread a richness and variety of colors in a free, open structure that simply followed the beauty of the sounds created. In contrast to that, Mr. Bernier followed an intellectual plan, he set his rules and let them work. One always sensed the will behind the music, one always tried to follow and understand the experiment instead of just enjoying the result. But, on the other hand, this method produced a certain strong energy in the work. This composer had the power to raise and hold the intellectual interest of the listener.

All in all, it was fascinating to take in over a few days such a wide range of styles and personalities, and to learn a little about their methods.

trans_canada also provided the chance to meet the composers in person. Each of them delivered a paper about their work. They could only give a rough survey, of course, in a 45-min talk. Rather than concentrating on techniques or software, most composers just tried to acquaint their colleagues and the small number of other interested people with their sources of inspiration, their opinions, their philosophy. Remarkable was the clear delivery of all the composers and the relaxed atmosphere of these sessions. There seemed to be no need to impress anyone, and not so much need to discuss, let alone debate. Everybody was open-minded and respected the others, as if trying to learn and understand, not to question fundamentals.

It was like a good talk between colleagues and friends. Mr. Normandeau provided insight into his large archive of sound and his permanent work on the human voice. Mr. Gobeil expressed his preference for the sound of exotic instruments (like the Daxophone) and his dislike of techno music (inducing him to write a techno-piece). Mr. Dhomont talked about the relation between accident and control in his work, marking his own position somewhere between Pierre Boulez and John Cage: “Boulez would say: ‘This is incidental, throw it away;’ Cage would say: ‘This is incidental, so I take it;’ I say: ‘Look, there is an interesting incident, but should I take it?’” He also used the opportunity to call for more polyphony in electroacoustic music instead of the exclusive concentration on creating the most original, most exotic new sound: “In an orchestra, you mix different instruments, but the single instrument becomes not less beautiful.”

The exceptional environment of ZKM supported this beautiful richness of sounds and the inventiveness of the composers immensely. The two concert venues offer exquisite acoustics. They were equipped with 70 concert loudspeakers, placed in either circles or in a kind of “acousmonium surround environment.” This, in conjunction with the timbral and spatial qualities of the works, created an extraordinary musical experience.