This write-up was just going to be about Francis Dhomont’s latest, Images nomades, but then it occurred to me that since I detected some changes in his overall sound from the 80’s material, of which Les dérives du signe is primarily comprised of, it may be of interest to look backward and examine the earlier album as well. This would leave the door open to say a few words about some differences my non-professional / non-practitioner ears have heard. Without a doubt though, both albums are nothing short of brilliant, and why wouldn’t they be coming from one of the genre’s most accomplished professionals?

Les dérives du signe was originally released as the second disc of a two-CD set called Mouvances-Métaphores in 1991 but later released as a stand-alone disc in 1996. To quote the composer regarding the four pieces on this album, “These four works play with diversion. The diversion: of musical discourse in Novars, of sound sources in Chiaroscuro, of sensory perception (synesthesia) in Météores (Meteors), and of nature in Signé Dionysos.” He then further ties things together by saying that the “works are united around the common theme of movement as with virtual displacement of sound in geometric space, or metaphorical transferences of meaning into the realms of imagination”.

That last quote is telling because I consider both of the “movements” he references germane to all Acousmatic music. The most obvious example would be in the piece Météores. Dhomont’s use of panning techniques as well as volume manipulation and dead silent space is masterful here. The whole sound field is used as a stage, and this stage is as big as the night sky itself. The sense of constant movement is palatable, and the rising, and subsequent falling intensity in this work creates a sense of wonder and awe that acts as a key to unlock whatever celestial vision your mind can conjure.

Signé Dionysos, the longest excursion on the album (28 minutes) brings you back down to earth, at least for a little while. This piece exudes a sense of the organic. Here we have recognizable sounds such as chirping birds, children running/playing and, in a prominent starring role, frogs… possibly many frogs doing whatever frogs do down at the local pond. All this is augmented by longer, more processed sounds of indeterminate origin (or quite possibly of the natural sounds referenced above… but does it matter?) which serve as a darkened pathway towards realms more mystical. Suddenly the pastoral mood of nature morphs into something substantially more menacing. Dhomont’s talent for stitching disparate moods together in a biologically pure way is on full display here.

Novars, which is actually the first piece on this album consists primarily of two sound sources; a quotation from Pierre Schaeffer’s Étude aux objets and, what was surely a big hit in ’64 (and I’m talking about 1364 here) Guillaume de Machaut’s Messe de Nostre Dame. There is also a guest cameo appearance of Pierre Henry’s famous creaking door from Variations pour une porte et un soupir. To me, Novars is a great example of organizing sounds within a traditional musical structure. I hear reoccurring themes coming back to act as a prelude to another (usually lengthy) passage of dark and somewhat disturbing sound mutations only to resolve themselves back to the “safe” bridge of what occurred earlier. The surprises happen after these short interludes and it’s these long passages that free the mind to wander within unfamiliar landscapes.

The piece Chiaroscuro is my favorite of this set. As the title suggests, it’s the play between shadow and light. Dhomont might be asking the question of what happens at the murky borderline where the two meet? Using sounds plundered from some of his earlier compositions but processed in ways preventing any recognition on the listener’s part, he creates a stunning sound world that I would suspect even the most imaginative person would find challenging to navigate. For me, every listen (and there have been many) yields a new, fresh, and completely mind-expanding experience. Dhomont’s ability to creatively (an understatement) organize sounds leads the listener on an endless journey of changing moods, landscapes, and emotions… one that is not soon forgotten! 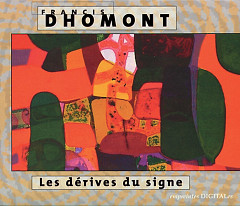 Les dérives du signe
Dhomont’s ability to creatively (an understatement) organize sounds leads the listener on an endless journey of changing moods, landscapes, and emotions… one that is not soon forgotten!