James Andean is a composer, but also does free improvisation and music performance in groups such as Rank Ensemble, The Tuesday Group, and Plucié/DesAndes. His Assemblance(s) is both maximal and lively. At any rate, he’s good with creating strong dynamics and jarring shifts in timbre through his editing, particularly on pieces like Déchirure, whose very title indicates it’s all about “ripping up” the sound. He uses field recordings, but very precise ones — and can tell you an interesting travelogue story about each one (e.g. the old Jesuit monastery in Greece where the wind gave him many moments of epiphany). He also uses piano and percussion in his work, and samples of famed opera singer Maria Callas on Maledetta, his unsettling sound portrait of the terrifying Medea character. I’m also warming gradually to Valdrada, which is not only a fascinating sonic enigma, but is prefaced with an Italo Calvino quote; anyone who reads Calvino is OK in my book. A strong and varied set with a lot of great compositional ideas, backed up by life experience and insightful observations. 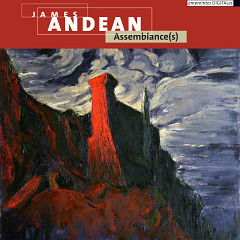 Assemblance(s)
A strong and varied set with a lot of great compositional ideas, backed up by life experience and insightful observations.