The website of Diffusion i média (a company founded in 1990) was launched on February 1st, 1995, at a time when the Web as we know it was in its early days. This web site was designed by Nathalie Berger and was maintained by Jean-François Denis.

Note that this version required the visitor to adjust the width of their screen in order to view the site optimally! This practice has long been abandoned.

A new version of the web site is released as early as 1997. At this time, a small revolution had taken place in the HTML world: it was now possible to organise information in columns using “tables”.

The relatively rudimentary design is very much a product of the 1990s. However, the information itself was very well organised already.

All in all, this site can be considered a pioneer in its domain. Notice that, starting summer 1997, audio clips are offered.

Exactly five years later, for the 10th anniversary of the company, a new version of the site (heretofore known as “version 1”) was launched. This new version was created by David Turgeon, who is still the company’s webmaster.

The graphic design is noticeably different. Another innovation is the introduction of the official address of the site, electrocd.com.

More technically, this new version eliminates a good part of the manual operations needed to maintain the site. To that effect, a software was written (in Perl). This software can read (FileMaker Pro) databases and make a web site out of them.

This web site represented a certain evolution but it was not without its shortcomings. This is why it was soon replaced…

The more flexible website which was created in 2001 was a better contender. For the most part, its design has not changed that much since.

Graphically more austere than the previous version, this new version is first and foremost easier to maintain, as it eliminates even more manual operations.

The tab system serves to organise information in a more logical way than ever.

More importantly, this new version is more extensible; new pieces can be added to it without causing too many headaches. This is partly the cause of its longevity.

The 2002 version, which doesn’t seem too different from the previous one, clarifies some aspects of the design and adds a few options, such as our famous headlines.

The catalogue is growing. More artists are included on the web site. No problem!

New options are offered, such as the possibility of browsing the complete works of certain composers. 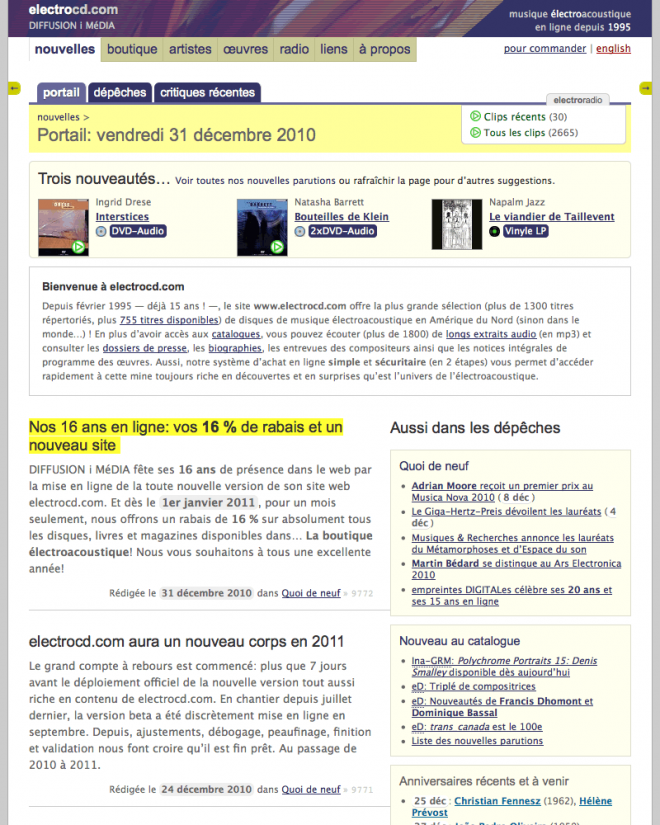 The site development has seen a mini-revolution in 2003 with the complete rewrite of the web site from Perl to Litk, a programming language created by David Turgeon and used to generate web sites. This language allows even more flexibility. And this is what you can see right now by browsing our site through and through! 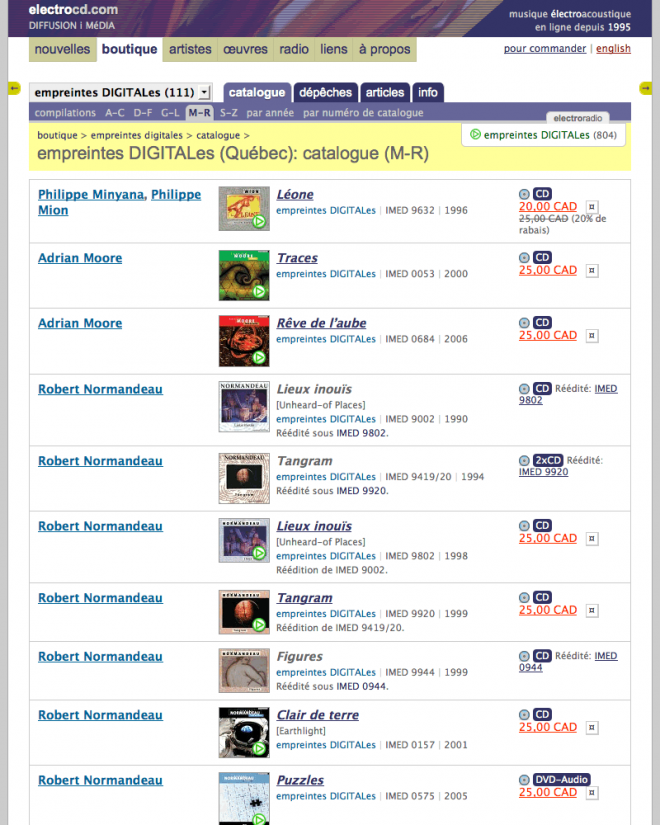 Moreover, during 2005, artifacts from the 2001 version (and even from previous versions) have been eliminated or improved in order for the site to comply with the most recent web standards, not to mention the needs of our visitors. This way, this web site continues to be of its time! 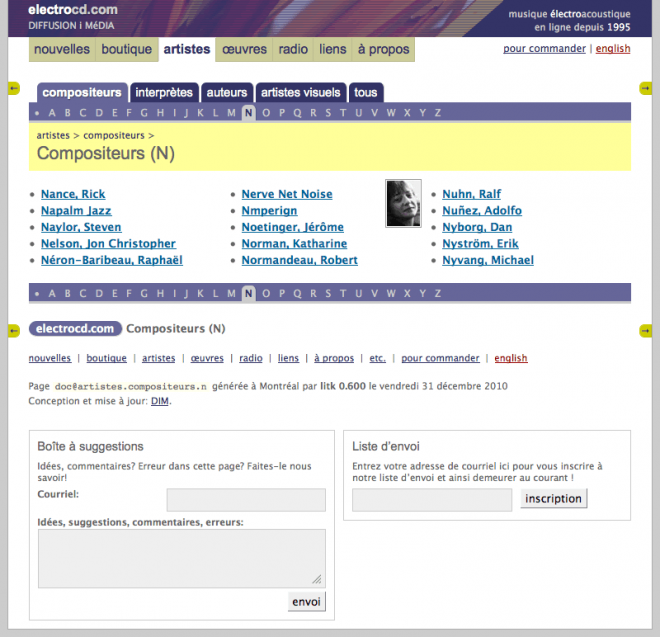 The fundamentals of the site don’t change, but its looks are slightly modernized.

The great new feature from this era is, of course, our famous radio module, which replaces the complicated systems of yore. A great step forward in order to make the site more audio-friendly… 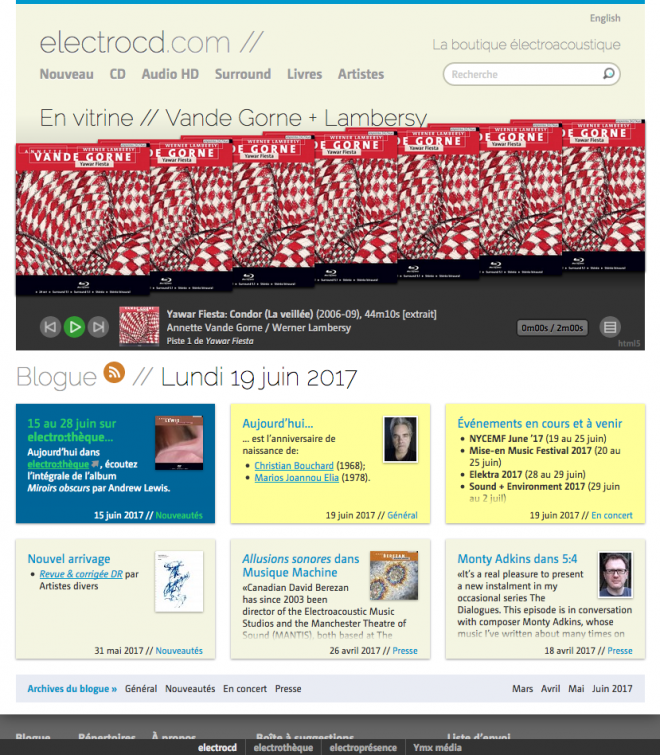 In 2011, we have launched a brand new version of Electrocd. The home page was completely redesigned, showcasing a selection of new releases, as in a real shop window. The radio also comes to the front row. 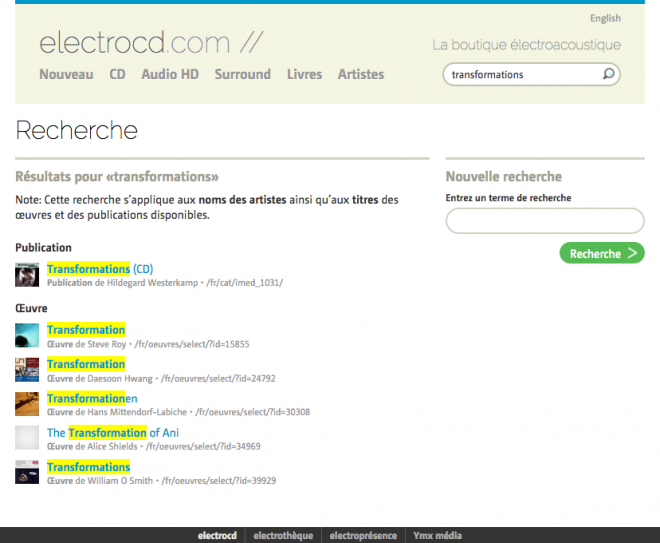 Another innovation: a search engine joins the good old listings to make it easier to find what you’re looking for. 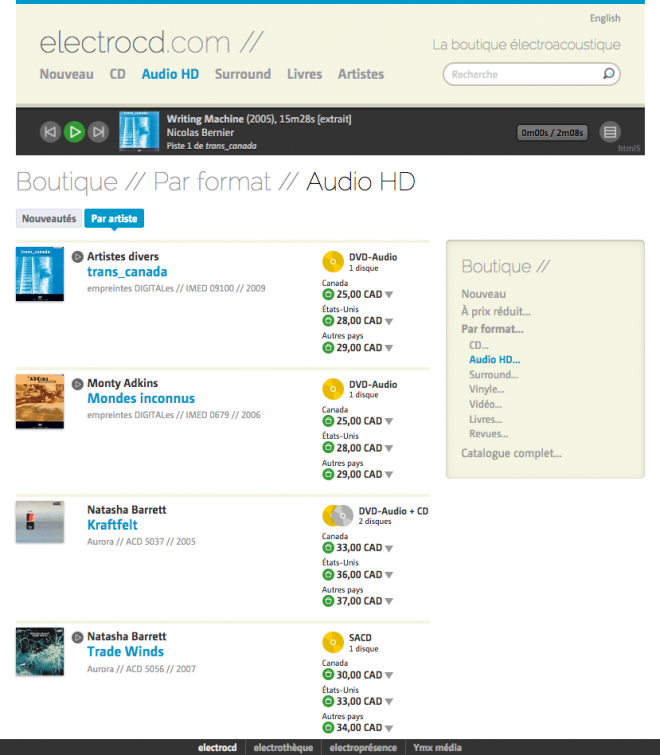 Those listings have seen a revamp too: new catagories have been established, which notably highlight our new high-definition and surround lines of products. 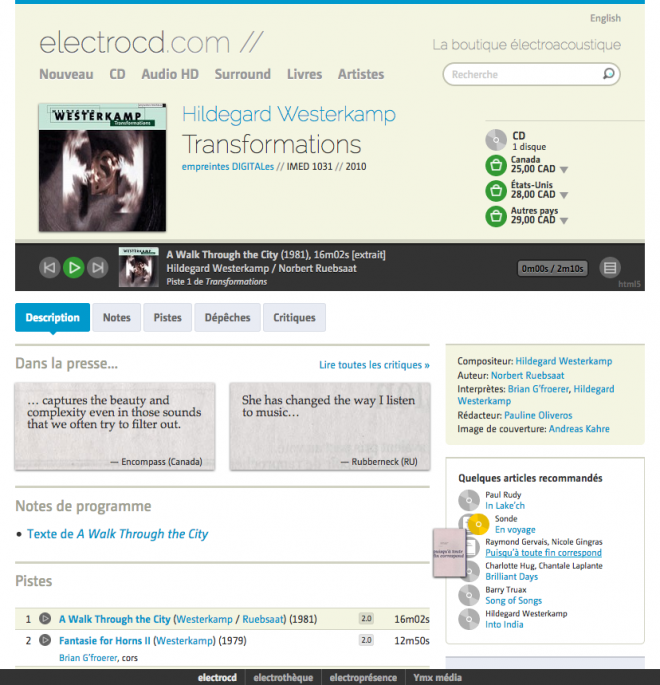 Album pages are also modernised: audio clips and latest reviews are put to the forefront. 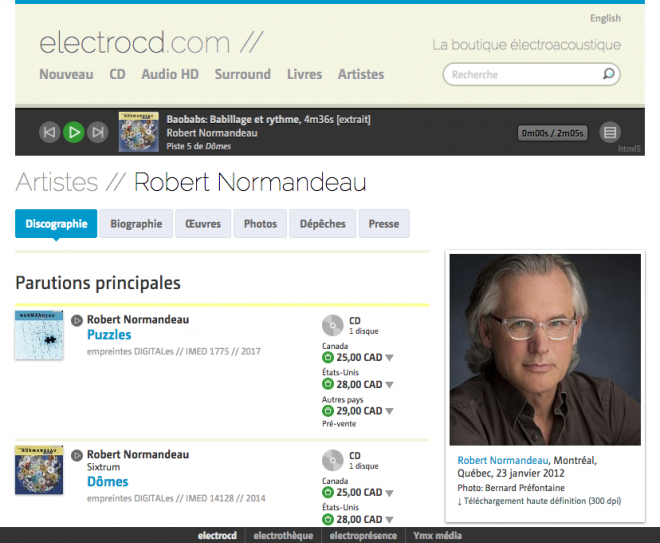 … and so on with the artist pages, which were reorganised using tabs.

In July 2017, following their model, comes the new electrocd! A responsive interface, a more dynamic experience, all the while maintaining the simplicity and ease that our visitors have always enjoyed. We are glad to introduce it to you!