Calon, one of the founding members of the Canadian Electroacoustic Community. Montréal, and French-Canada is the center of an extremely active group of composers workin’ in a style they dub «electroacoustics» a modern descendent of the musique concrète of such luminaries as Pierre Henry. This uses manipulations of acoustic sounds as well as electronics, to create evocative and compelling sound art. This work is much more humane than purely electronically generated sounds. This CD contains three pieces, Portrait of a visitor, The Disappearance, and Midnight, the latter being full of manipulated female orgasmic moans, which I like a great deal! It is not your basic hump-disco, but a highly deconstructed libretto about sex, death and other profundity. Overall, this is a very powerful space to spend some time in. 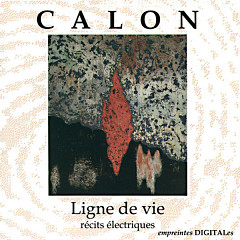