This coproduction is a tribute to the great pioneer of acousmatic music, Francis Dhomont, at the occasion of his 65th birthday. In order to explain what his music is all about I will quote from a text in the accompanying 210 page booklet: “In 1955, the writer and poet Jerome Peignot, at the beginning of musique concrète used the adjective acousmatic meaning ‘a sound that we can hear without knowing its cause’ to designate ‘the distance that separates a sound from its origin by obscuring behind the impassivity of the loudspeaker any visual element that may be connected to it. Finally, around 1974 Francois Bayle introduced the term acousmatic music as a specilic kind of music. as the art of projected sounds which is ‘shot and developed in the studio. projected in halls, like cinema’.”

Francis Dhomont’s career has been a curious one. He grew up. and initially built a living in the south of France. At fifteen he composed music for piano. Much interested in both sounds and technology in 1947 he bought a wirerecorder and started experimenting. When Schaeffer raised a lot of dust in Paris he travelled to the capital and followed courses. Late 70’s he moved to live in Canada. The booklet features an extensive biography.

The music on these two CD’s spans some ten years of work. It shows music, makes music visible. Dhomont’s works exactly follow the above-mentioned definition. I have my questions about parts of the acousmatic philosophy, but listening to this muslc is quite an experience. DIFFUSION i MéDIA initlated this project and have. again, done a wonderful job. 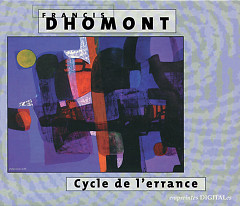 Cycle de l’errance
… listening to this muslc is quite an experience.