At last we received new material by this label which in the past has released such marvelous music. A survey of Denis Smalley’s music ranging from 1976 to 1992. This composer, born in 1946 in New Zealand showed early talent as chorister, pianist and organist. Later he gave many New Zealand-premieres of organ compositions of Ligeti and Messiaen.

On the cd 5 works are presented and typically I like the older composition more than the later ones. When working chronologically through the cd I can hear the roughness disappear and be replaced by well finished, polished sounds. Much of the compositions were (partially) produced/composed at IRCAM in Paris and it sounds like that. The ‘sound’ of Paris is rich in overtones, ‘ceramic’. In Wind Chimes, a work produced in the UK it is completely absent. In the compositions of the nineties (Valley Flow and Piano Nets) it is a omnipresent part of the sound. They are also characterized by a sometimes annoying carefulness of the sound’s envelope. Whereas in the older works sharp attacks, and sudden bursts of sound are quite common, in the latest compositions on this cd attacks are very slow, or ‘packed’ inside another sound. Titles indicate this too, using the words “flow” and “net,” just like in the 1985 composition Clarinet Threads.

Smalley definitely is a skilled composer, with a great feeling for balance and structure but his compositions could do with some new spunk. The vitality that is present in his 1976 work Darkness After Time’s Colours. 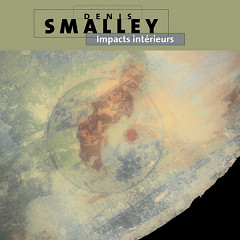 Impacts intérieurs
… new material by this label which in the past has released such marvelous music.