A new solo cd by guitarking René Lussier. Not released on Ambiances Magnétiques which is normally the case, but on another excellent Canadian label of avant garde music: Ohm Editions. By the way it was on Ambiances Magnétiques that Lussier released in 2000 a solo album for electric guitar. Now it’s the turn for the acoustic guitar. The cd offers us 13 solo improvisations for solo acoustic guitar. No overdubbing, editing, etc. has taken place. But the improvisations were recorded by eight microphones and the final recordings as heard on the cd were mixed from these eight different sources. This in order to accentuate different points of hearing. So the use of headphones are advised if you want to experience the spacial effects. This process was also used in the case of Solos de guitare électrique, recorded in 1998 and released in 2000 for Ambiances Magnétiques. For this new one, all recordings were made during three days in march, 1999 at the Avatar Studio, Québec. The pieces give an insight into the radical, unconventional and wide repertoire of Lussier techniques. The music is sometimes lyric, poetic, humoristic, powerful and very expressive. Lussier plays with many different musicians from all over the world. Here we have the opportunity to meet him solo and to discover where he is at as a guitar player and improvisor. “At first, it was a terrifying enterprise, since the road of guitar solo performances is one that many musicians has been down - including the big names - and because the result of the exercise is unforgiving. It provides the improvisor with a kind of instant snapshot, a self portrait taken with no make-up and no concessions. When he listens to it, all he can say is… This is where I come from, this is where I’m at!" Exactly. Take it as a honest invitation. You won’t regret it. 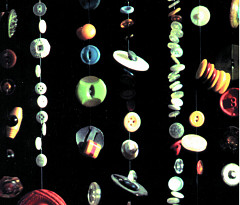 Déboutonné
Take it as a honest invitation. You won’t regret it.