For Ohmix the Quebec based Avatar Foundation invited eight composers to plunder the back catalogue of its OHM Éditions imprint and produce new work through their remixes and transformations. German recyclist Ralf Wehowsky, of P16.D4, kicks things off with a steadily building shimmer that peaks in a flurry of samples followed by a gentle, pulsing decline. Montréal turntablist Martin Tetreault’s brief contribution collapses muitiple sources into a jittery flux, music and voice sped up and whisked into an agitated state. French composer Christian Calon produces a tense dystopian piece in which an impoverished and seemingly distressed human voice is hemmed in by shadowy electroacoustic forms. Terre Thaemlitz contributes Transit(ional Edit) a clicking gridlock of synthetic horn sounds, an angry and terminally immobile jam. There are two pieces from arch plunderer John Oswald. Ohmigone (re)constructs a radio phone conversation, empty words drifting amongst inhuman sounds in a communication vacuum. Ridge builds from ripples to waves to a breaker of lush piano music. Spikier piano runs through an animated piece by Diane Labrosse, who has played with the groups Wondeur Brass and Justine. Tinkling bells, organ chords and reedy blasts, cartoon squeaks and distorted human voices are among the other elements in this soundtrack to some enigmatic narrative. Ambient technician David Kristian spins out an enigma of another kind. His Ohmite gradually intensifies from pinpoint to full glare without ever revealing the source of its luminous throb. Finally Alexandre St-Onge, an improvising associate of Kristian, drains the remaining air from the Ohmix atmosphere, mimicking the micro rhythms of a puncture or a gas cylinder with an open valve. A long, measured breath out. The OHM policy of taking risks often results in albums that include arresting episodes yet are uneven overall. A more selective project, Ohmix is consistently worthwhile. 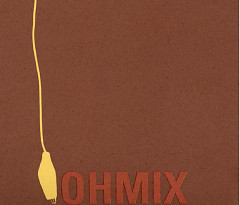