Well, I’ve been waiting years for this one… ever since I heard the unbelievable Cricket Voice on the first Aerial compilation released on Nonsequitur ages ago. Hildegard is, as it pointed out by Pauline Oliveros in her brief introduction, sensitive to soundscape. She calls herself a sound ecologist and handles her subject with a great deal of care. She’s included a bunch of technical notes which explain some of her procedures. The CD starts with A Walk Through The City, which in addition to natural and processed sounds also includes a bit of spoken voice. Not my favourite thing in this kind of music, but after a few listenings I discovered that it fitted perfectly. The idea behind the inclusion of a voice being that it symbolizes the human presence in the urban soundscape. There’s carhorns, brakes, sirens, aircraft, pinball machines, construction and a couple of hoboes, one of whom insists on not knowing why he can’t stop drinking.

This is followed by Fantasie for Horns II, for French Horn and tape. Sound sources on the tape are trainhorns, foghorns, boathorns, factory horns and even alphorn! Loadsa horns, in fact, which remain intact with their natural modifications as modulated by their surrounding landscapes. It beautiful—a trip, quite reminiscent of the stuff by Pauline Oliveros in the Cistern Chapel (which far exceeds anything I have yet heard by Stuart Dempster and his trombone ensemble recorded in the same place).

Next up is Kits Beach Soundwalk, an extension of Hildegard’s radio plays called ‘Soundwalking’. Fortunately this track is just less than 10’00 long… I say fortunately with some reluctance as I did try my best to assimilate Hildegard’s voice which accompanies this soundtrack. She explains in mildly poetic terms what is going on and then displays some technical tricks which come across as a sort of lesson at the School of Audio Engineering. I found this piece most annoying, but all is not lost because she saved the best till last. Cricket Voice is included here too—it is a brilliant shimmering exploration of minuscule sounds recorded in the silent desolation of a Mexican desert region. The cricket’s chirp, slowed down, becomes the “heartbeat of the desert, at its original speed it sings of the stars.”

And finally, Beneath the Forest Floor, which is composed from sounds recorded in old-growth forests on British Columbia’s westcoast. It includes the sounds of small songbirds, ravens, squirrels and flies which move in and out of the forest silence like the small creek that meanders through it. This piece creates a wonderful sense of peace in the listener, which is the intention. It glides slowly into a world of processed sound which is as close to the sound of a tree growing as I have ever heard. Never mind track 3, just get this thing! 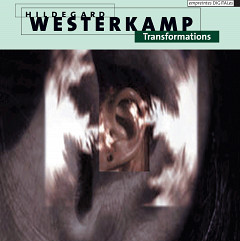