The name of Francis Dhomont needs no introduction to members of CEC or readers of its publications — active in Montréal as composer and teacher for almost twenty years, he is the ‘musical father’ of nearly all of the younger generation of Québécois composers who have made such a mark in the electroacoustic world in the past decade.

The two CDs under review were released together with a timely relaunch of empreintes DIGITALes’ earlier Dhomont double album, Mouvances~Métaphores, this time in the format of two singles, Cycle de l’errance and Les dérives du signe.

Like part of the earlier double album, the two new CDs form a cycle, the Cycle des profondeurs, inspired by psychoanalytic thought. The first piece in the cycle, Sous le regard d’un soleil noir (Under the Glare of a Dark Sun) is based on texts by British psychoanalyst Ronald D Laing; the second, Forêt profonde (Deep Forest) takes the writings of Bruno Bettelheim as its starting point; Dhomont states that there is the possibility of a third work in the cycle, “devoted to the works of Kafka, guided by the writings of Marthe Robert.” If the quality of the two disks under review is anything to go by, I wait for this third piece with great excitement! Sous le regard d’un soleil noir dates from 1979-81, some of it having been composed in the studios of the GRM in Paris (the two CDs are produced in collaboration with GRM); Forêt profonde, according to Dhomont himself, has ‘accompanied’ him for the last fifteen years, its final production occupying him for the two years 1994-96.

The first notable feature of both works is their description as ‘acousmatic melodramas’. There is a substantial amount of text in these pieces and, at almost an hour each, the non-French-speaker might well feel some trepidation about his/her ability to engage in what Dhomont is offering. Indeed, the composer shares this concern — at a recent performance of Forêt profonde here in Birmingham [UK], Dhomont was most anxious that English translations of the texts should be available, even to the extent of having quite a high lighting level in the hall by which to read them during the performance! The sensation of pure sound, however, is so wonderfully controlled that this is much less of a problem than one might suppose, and the richness of the works is such that they will bear many repeated hearings, though additional levels of meaning will, of course, be revealed by study of the texts and translations supplied in the very generous booklets.

Sous le regard d’un soleil noir deals with schizophrenia. It is, like the Laing on which it draws, not about schizophrenia, but is a kind of analog of it. Not only does the material suggest a progressive deterioration into the condition (through, for example, the splitting and distribution of text in ‘self-trios’ and the like) but even the spatial organisation suggests the dichotomies and polarisation implicit in the subject matter: the contrast of very ‘present’ material with highly reverberated sound and tightly focused, almost mono, sounds being subjected to sudden, very stereophonic interjections. It is a characteristic of this piece that such treatments are never simplistic, but always fresh and constantly redefining themselves — always serving to enhance the ‘experience’ (which, of course, we cannot have) of another’s experience. In doing this, as Jean-Jacques Nattiez points out in his introduction to the work, Dhomont ‘constructs a more general myth through which the ‘normal’ man discovers his own schizoid traits’. 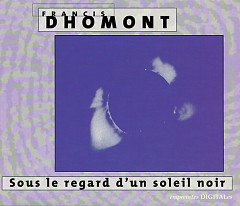