All too rarely do recordings appear which present a convincing argument for the value of acousmatic music, but this CD from Stéphane Roy does just that, and with no shortage of eloquence. This is acousmatic art in its purest, highest form. There is a fluidity and mobility in the control and shaping of material which reveals a truly sculptural approach to sound — sound as a plastic medium. One immediately notices the careful attention to detail in this music, yet it is never over-controlled. There is always a sense of real joy, of reveling in the beauty of the sounds for their own sake. This is music which is immediately attractive on first hearing (perhaps because of the strong pitch content), but also promises that closer listening will yield yet greater rewards. What comes over very strongly in all the pieces featured is that the composer is not simply manipulating material as if it were inanimate matter. Instead, the sounds really are made to live and breathe, as if they themselves possess an intelligence, and exhibit particular behaviors in direct response to their sonic environment.

All the pieces on this CD share common stylistic attributes, in particular a characteristic use of the re-enveloping of sounds, both in intensity and in pitch. The earlier works Ondes / Arborescences and Paysages intérieurs share a vitality which at times can be overwhelming, but at the same time is always clearly under control, while Mimetismo achieves with apparent effortlessness the difficult task of carrying such a strongly acousmatic language over into the live instrumental domain, and in such a way that guitar and tape really do act as one (something often claimed for other pieces, but rarely with real justification).

An important point is that these works exhibit not just artistry, but craftsmanship too, something indispensable in the acousmatic domain, since the composer not only conceives the music, but also makes it. In the final piece, Crystal Music, this craftsmanship is taken to new heights, with its exquisitely controlled explorations of quiet but intensely active shards of sound. In effect, the sense of craft becomes itself part of the artistic experience. We need more such music. 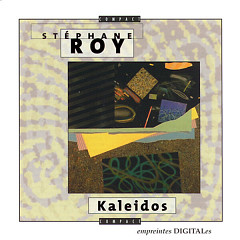 Kaleidos
This is acousmatic art in its purest, highest form.