Jacques Tremblay’s world is a pretty frightening one. Taking his cue from traditional concerns of musique concrète, his music is cinematic, narrative-based and populated by many recognizable sound-sources. Take the lovely Oaristys, which the composer rather worryingly describes as erotic. It moves programmatically through six stages of a sexual encounter, each one populated by disturbing, disembodied sounds, cavernous echoes and intense dissonance. Maybe this just goes to show subjective any ‘program’ will be, attached to any music, even in this most illustrative genre. Given that Oaristys is Tremblay’s tender ballad, no wonder tracks describing “the unconscious, prowling and searching for a way to enter the fissured wall of memory” or “the cruelties that man has committed in the name of God” are a long way from blissed-out ambience. While the musical content of these pieces is in itself enjoyable enough, the concrete sounds (including spoken words, water, footsteps; the usual things) create a considerably more all-encompassing atmosphere of nastiness. It’s as well that Tremblay puts enough musicality into what he does that you feel you want to keep listening. It’s something like watching a horror movie with your eyes shut.

The last two tracks are less conceptually scary, but just as edgy. Rictus nocturne is the composer’s tribute to jazz, and oddly enough it’s the world of mushy standards which gets the treatment. Still, apart from the odd, obvious sample, what Tremblay is doing here is using the notion of the “jam session,” the informal, after-hours playing where much experimentation often goes on. Combining a variety of electronic techniques under no particular theoretical rubric, Tremblay creates a altogether abstract work of music with very little to do with jazz; though it’s a lot of fun. Jeu d’ondes is a short piece sampling sounds from a yacht (both the boat and the water) and completely re-frying them to produce another abstract composition. Tremblay’s relationship to his sources is ambiguous, transforming some beyond recognition while leaving others untouched. Often, as on the first and final tracks, the results are extremely dramatic; in Oaristys they are strangely beautiful. 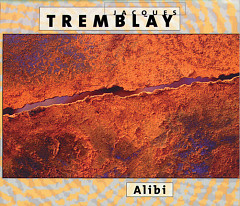 Alibi
… the results are extremely dramatic…