The logical ‘in honor of the fiftieth anniversary of musique concrète’ follow-up to 1994’s Électro clips CD, Miniatures concrètes contains three-minute long musique concrète compositions by 24 different composers. The name recognition quotient of this one is similar to that of your average techno sampler, with the only names I can remember having ever been mentioned aloud being Jocelyn Robert and Åke Parmerud, but then again I suspect most ‘big name’ electroacoustic composers probably aren’t in much danger of being mobbed by throngs of adoring fans when they go to the mall, even in France. Miniatures concrètes thus serves as a fine young persons guide to what (and who) is new in electroacoustics throughout the western world at the end of the century. While not-too-many years ago it was forgivable to believe that all ‘serious’ electroacoustic music was confined to the French-speaking world, a whole 3/4 (!) of the artists included here reside outside of France and Québec. Also, the fact that a good share of the composers here are not tenured faculty should hopefully help dispel the idea that musique concrète is purely an academic art form. Heck it even includes two artists associated with the ambiguous music ‘underground’ including Ios Smolders of the acclaimed (by somebody) Dutch group THU20; and, bless my soul, Roger Doyle, who will no doubt be remembered by corporate historians of the future as Bono’s piano teacher, and to the rest of us as the mastermind behind the excellent sound collage album Rapid Eye Movements released by United Dairies all the way back in 1981-under the moniker ‘Operating Theatre’ (it was the ‘industrial’ era after all). Good to see him still alive and releasing numerous unheard-by-anyone albums in the interim.

If there is any sort of unifying thread to Miniatures concrètes (other than the musique concrète thing), it appears that each artist was given three sound sources to manipulate in the realization of their piece, though they were allowed to use any additional sound sources. In at least one case, these sounds were the sole source of the work (Katharine Norman’s oddly clunky Squeaky Reel) and in other cases they sound as though they were tacked on as an afterthought (as in Ned Bouhalassa’s piece, where they appear, unmanipulated, following a short period of silence at the end). Given the cut-and-paste nature of the genre, this compilation has a high degree of continuity (if that is important to you), and on a casual listen it is hard to pick out individual pieces, but the outstanding feature of this collection is its diversity. Miniatures concrètes serves as a fascinating primer of the electroacoustic world as it is today.

The first few pieces are fairly busy sound collage which vary in density and development, and at times gives the impression of some kind of strange, undanceable alien techno. Jacques Tremblay’s opening Le vidoir is particularly dense and nearly as manic as a Carl Stallings cartoon soundtrack. Other memorable pieces include Daniel Toussaint’s La chasse au pougablunk boumeu, an imaginary short film for the ear documenting the ritual hunt of a cruel tarmac-devouring bird, and Robert’s Prélude à «des dieux en conserves», a humorous collage of stock sound clips which is probably the high point of the first quarter of the disc.

The pieces on the second quarter are more spacious, take a little longer to develop, and to me are slightly more satisfying. At times, this stuff approaches what we used to call ‘industrial ambient’ 15 or so years ago, without the cultural baggage that term implies. All are uniformly excellent, though the eerie vibe of Elainie Lillios’s Au deuxième étage and Natasha Barrett’s unsettling Racing Through, Racing Unseen are particularly tasty.

The second half of Miniatures concrètes becomes more abstract and ungraspable and consequently difficult to describe. Textures and moods vary from the dense and noisy (Doyle’s The First Spirit Level) to dark and somber (Sylvia Eckermann & Mathias Fuchs’s Bad Room) to Trente oiseaux-like subtle acoustics and silence (Smolders’ Manga pour l’oreille). The album concludes with the unique nearly song-like A Man is a Delicate Flame by Justice Olsson, which sounds vaguely like a remixed Wyatt-era Soft Machine tape cut into a thousand pieces and scotch-taped back together. 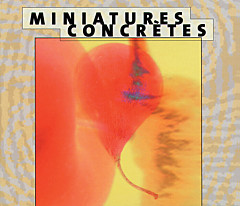 Miniatures concrètes
All are uniformly excellent…