The Montréal based label empreintes DIGITALes has just rereleased Corazón Road, a wonderful cd by the [French] electroacoustic duet Kristoff K.Roll (Carole Rieussec and Jean-Christophe Camps). This record was originally released on SONARt in 1993.

Kristoff K.Roll invites the listener on a trip to Central America and Corazón Road acts as the diary. Through the sounds of travelling, the snippets of conversation (in English, French and Spanish), the smiles of people encountered, the exhilaration of the discoveries but also the solitude and mostly the adventure into human nature, this record talks to the listener, it appeals to us. And it takes us on a 75-minute journey where electroacoustic art is not the austere object some would like to believe, but the artistic, emotive and humane transcription of an experience very hard to translate (I know: one of my research fields in literature — my day job — is travel literature). The electroacoustic art of Kristoff K.Roll is akin to Francis Dhomont’s aesthetics (a non-linear storyline, the importance of speech), particularly his Forêt profonde (also on empreintes DIGITALes [IMED 9634]). 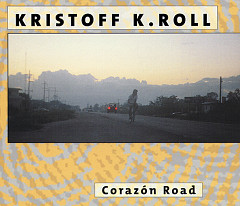