Born in Weimar in 1966, Hans Tutschku has been studying, composing and performing electroacoustic music for a number of years with various groups and institutions. He has an impressive CV of compositions and multimedia productions to his credit. Moment presents 5 compositions dating from 1991 to 1998. Each of these pieces can be seen as an exercise in integrating vocal and instrumental sounds into electroacoustic compositions, done — in Tutschku’s own words — “with the esthetic concern to maintain the cultural context of the source”. The first, extrémités lointaines, uses recordings he made during a concert-tour of Asia, of city sounds, the music of churches and temples and children’s songs. Presented with “these unexpectedly rich sound worlds… “the intensity of the impressions experienced during the trip has resulted in a dense compositional structure”. This density has been achieved with stunning results, the sound manipulations are incredibly complex and delicate, and these qualities can be found throughout these recordings. The second work, … erinnerung… is based on a poem written and performed by Spanish author Antonio Bueno Tubia. The recording of the reading “forms the starting point for acousmatic transformations.” What results is a “musical translation” of the poem, created by first cutting up the sounds of the poem into minute pieces and played back “polyphonically to create dense sound textures”. The fourth piece, Sieben Stufen, is one of the most notable compositions here. It is based on the poem Verfall by Georg Trakl (1887-1914), and uses two readings of the poem (spoken by four different voices) as its sound sources. The four key words of the poem, Verfall/ruine/decline, Abend/au soir/evening, Glocken/cloches/bells and Vögel/oiseaux/birds, are sung in fourteen pitches (seven in German, seven in French). The results of Tutschku’s acousmatic treatments are truly remarkable, haunting and mysterious. The compositions on this disc each have their own intense structural constraints, almost all with numeric fixations. Les invisibles is based on the number five (5 parts, each divided into 5 subparts, the harmonic material based on 5 chords of 5 notes each), and Sieben Stufen is based on the number 7 (seven sections, compression of the piece into 49 seconds, two sets of vocals in seven pitches each). These works are structural marvels. Also, the sound-sculpturing and production work here are of superb; the sounds breathe a life and dimension of their own, and seem to crawl out of the speakers and into the space around you. Highly recommended. 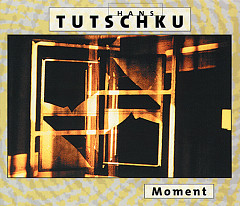 Moment
… the sound-sculpturing and production work here are of superb; the sounds breathe a life and dimension of their own, and seem to crawl out of the speakers and into the space around you. Highly recommended.