I don’t pretend to know a whole lot about electroacoustic music. I’ve picked some stuff up over the last few years, but I still lack the appropriate perspective — I can’t help approaching and assessing electroacoustic compositions on the basis of conventions better suited to rock music. Though many works within the genre have far more to do with mathematics and sculpture than with songwriting, I continue to look for the music.

When you’re talking about a composition that sounds like loose change falling out of someone’s pocket and onto a multi-tiered metal scaffold, or a song made up of oddly-spaced taps on a series of fine-tuned cabinet doors, it’s easy to understand why pop music fans don’t gravitate to this stuff. Deprived of the recognizable verse/chorus/verse structure they savor, they’re looking for spectacle. That’s why Sondes is a good bet — both for newcomers to electroacoustic composition, and for old hands bored by bland, self-indulgent works.

Smith writes for a combination of acoustic instruments and found-sound tapes, creating mixed electroacoustic music. He makes use of instruments with distinctive voices — double bass, cello, alto flute and even accordion — and pairs them with truly striking sound effects. From the first seconds of InsideOut, which delivers a veritable “Dolby jolt,” you’ll realize that this is an album for active listeners — and for headphone fans. InsideOut is a fever-dream of sickness, referencing everything from horror-movie stringwork to feverish bodily operations. Elderly melodies are reanimated and forced to clatter across the soundscape, frightened onward by bursts of percussion. Despite a wealth of activity over several movements, the piece ends where it began, its energy nullified like an interrupted dream.

Less frenetic, Liquid Fragments 1 uses double bass and alto flute to envision music as experienced from inside the human body. It is full of activity, but somehow detached; we recognize the transition from calm to motion, and can almost identify the cause, but we lack the perspective required to understand it.

Elastic Rebound and Continental Rift are small scale sonic metaphors for grand-scale events, addressing the infinitely slow negotiations of geographic masses in a sped-up, confrontational style. The latter work makes liberal use of cello, including a series of striking classical references at its midpoint.

The Unmoved Centre is a conversation between sounds. The listener will hear an aural community come together as disparate musical and mechanical sources are woven into a dance of call and response, tiny movements negotiating for position within a greater sonic whole. Headphones, closed eyes and darkness will pay off nicely here.

Finally, the striking Convergence co-opts the accordion — an instrument, as Smith states in his notes on the piece, “commonly associated with fun, dance, drinking and local cultural events.” Though filled with moments of dissonance, the piece also bubbles with carnival-style musical humor, dispensing fragmented polkas that encourage the listener to dance amid the confusion. Though its focus occasionally descends to music-box mechanical details, Convergence remains fascinating, and sounds like an afternoon spent sharing hallucinogens with Astor Piazzolla.

Though it has its obtuse moments, most listeners will find Sondes to be a thoroughly vibrant and exciting journey, bubbling over with brain-tickling energy. Smith’s source material is rich in texture and subtlety, and you’ll experience great joy in discovering the finer details in his work.

Can a pop song enthall you like this? I doubt it. 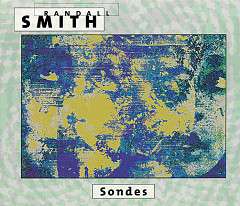