Now some music from a citizen of our country, Annette Vande Gorne she lives in the French part of Belgium while we live in the Flemish speaking part. empreintes DIGITALes is from Québec a part of Canada where they speak almost French. Therefore you hear a lot of French on their releases, are the booklets in French and English and have they contacts with French speaking artists from other countries. Annette Vande Gorne has put her music on poems from Werner Lambersy, a poet who lives also in the French part of Belgium. The poems are therefore in French, but the enclosed booklet, 45 pages, gives us a complete translation of all texts that are read in the compositions. In the first composition Annette creates with waves an atmosphere that goes close to the poem, it is of a man that makes a journey, to himself. She is able to create with ambient tunes the feelings that the man encounters through his journey. The following composition is more chaos, this time no ambient tunes but random sounds and various of tunes is the music. This time it is also not the music that follow the words, but the words of the poem receives also a random attitude. Words are read loud, quick, slow, calm and not only one by one but several sentences are read at the same time. In this composition no waves as in the first composition. Waves return in the third composition but on a more dramatic way, it follows the way the poem is performed, slowly and dramatic. Reading the explanation in the booklet you know why. It is a poem (black wedding) about a person who meets the feeling of death that is approaching . Soft and dramatic sounds and tunes comes over you, it is a composition that takes more then 34 minutes. This album is far out the most best record available where music and spoken word is mixed. You do not to know French to like this CD, because the large booklet gives you full translation and information about each composition, while French itself has a poetic beauty. 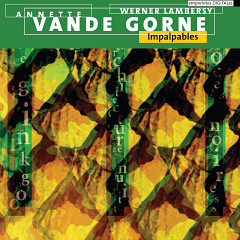 Impalpables
… the most best record available where music and spoken word is mixed.