Yves Daoust instrument is the piano, since as a child, therefore you find on this CD piano music. Not just classical piano music, no experimental music with the piano. He does not avoid using the classical piano sounds in combination with the new electronics. Impromptu (1994) the first composition is a combination of both, a classical play of Chopin is recorded with a sequencer and reworked. The result is a composition that starts with the classical timbre of the piano surrounded with an ambient atmosphere that slowly transforms into a very hypnotic atmosphere of piano tunes that comes and goes very quick. In the second track he goes completely an other way, there he plays with sounds and tunes. This way he creates stories with several atmospheres, sometimes you find yourself listening to a heavenly atmosphere of an other dimension while a bit later the nerve breaking sounds of a fair comes over you. Playing with sounds and tunes is what you also can found in the 4 other tracks on the CD. Especially his search for what is able to do creatively in music with what is there on the world. He works with sounds that he can creates and find around him, with the bell sounds of the Notre-Dame in Montréal, Water Music is a composition made with several sounds of water, and last but not least makes a composition with archive material from French Radio-Canada. Yves Daoust is a master of the composition, because he proves here that there is able to make music with the collage of sounds, thanks to the several atmospheres that he is able to put into his compositions. 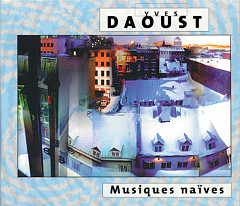 Musiques naïves
Yves Daoust is a master of the composition…