The English title is “The Mechanics of Cleavage,” and brings you 8 tracks of mysterious music. In a few tracks Gilles Gobeil has some co-operation from Suzanne Binet-Audet (ondes Martenot), René Lussier (electric guitar) and Lyette Limoges with text and scenario.

It is mysterious music that brings you a soundscape of sounds as you think you are walking on a outer space planet where you have go through several places with obstacles. Doors of sounds opens, sounds apears and go away again. It is almost moviemusic or music that can be used in a dark space movie. The first track Le vertige inconnu (1993) really suits in this explenation as it really brings you in this atmosphere.

The second track Voix blanche is in collaboration with Suzanne Binet-Audet who plays one of the earliest electronic instruments the ondes Martenot. The atmosphere and style is almost the same as the first track, only apart from some details such as a string sound.

All other tracks has the same atmosphere apart from some details in the tracks who changes the mood of the tracks in an other direction. We encounter hypnotic moods, industrial sounds and…

Different is the track 4 La ville machine (1992), “The Machine City” a better explanation you can’t find to describe the atmosphere in his music. This piece is a collaboration with Lyette Limoges who worked out a text and scenario for this musical play with the subject of sound ecology. A French text (with full English translation in the booklet) accompanies the story. It is just brillant this story and the atmosphere created in the sounds, it makes from it a cult Sience Fiction story.

The last track is his most earlier work, without using sounds that you almost can find anywhere in the world for creating his atmospheres, he uses sounds that comes from synthesizers and electronics. Here you can hear which way he wanted to go to, and we must say that his later work where he plays in a magnificent way with sounds from our civilisation (street, home, industry…) is better for creating his musical worlds. A thick little booklet is added in this brillant CD, with full explanation of the artists and the tracks, in French and English. 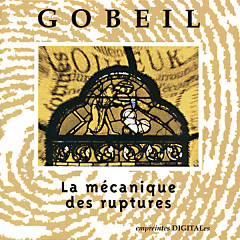