Clocking in at exactly 60 minutes Figures is Robert Normandeau’s latest release of acousmatic music. The opening piece is Le renard et la rose (The Fox and the Rose). This is a concert suite composed from two sound sources: music commissioned for The Little Prince and the voices of the actors involved in the recording of the story. It is light and bubbly with laughter layered and processed through a chain of effects. The second piece is Figures de rhétorique which combines tape and piano. It has a cosmic feel at times similar to early Pink Floyd and Stockhausen. The third composition is Venture, named after the 60s group The Ventures. But it is more than that. Venture refers to all the progressive rock music of 60s and 70s. Normandeau states that Venture is composed exclusively of fragments of that music. Unmistakably, there are bits and pieces of The Beatles’ Revolution 9 and Pink Floyd’s Grand Visier’s Party. I am uncertain of the other sources, but the resulting Venture is worth the price of this CD alone. Figures closes with Ellipse, a tape piece commissioned by Arturo Parra for him to accompany Normandeau on guitar. It sounds like heavily processed acoustic guitar scrapings, tappings, and noodlings. Or is it a swarm of angry alien bees? Figures is the high point for me of the recent empreintes DIGITALes releases. 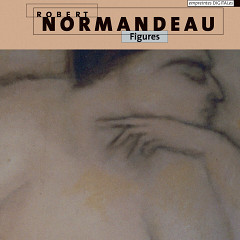 Figures
Venture is worth the price of this CD alone… the high point of the recent empreintes DIGITALes releases.