Cache 2000 is the conclusion of the Canadian Electroacoustic Community (CEC) young emerging artist project. 37 electroacoustic pieces were submitted to a web-based competition called Times Play. An international jury gave scores to each piece and the 14 top-scorers are featured on this CD. The composers approach the genre from different angles, ranging from pure musique concrète to mixed media pieces. The running order follows an alphabetical order, an arbitrary decision that excludes any chance of cohesion (when will compilers learn that a running order should not be left out to arbitrary factors but thought over as an extended way of composing?).

The stand-out works are jef chippewa’s DUO (nice interplay with a squealy saxophone), Michael Gurevich’s Soft White (disturbing tape, saxophone and poetry piece) and Julien Roy’s bouncy Rémanence (Remix). A special mention goes to Ivan Zavada’s Relation Diplomatik, an intelligent piece mixing sound art and electronics. Cache 2000 is an honest compilation and some of these young composers should deliver strong CDs of their own in the future. 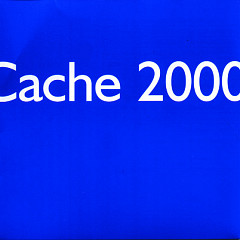