The front room of Le Cagibi, the comfortable, funky neighbourhood café at St-Laurent and St-Viateur, is normally populated by students and post-university types huddled over their laptops. But for the last year, the back room has been the scene of Mardi Spaghetti, a Tuesday night improvised music series curated by Josh Zubot, Philippe Lauzier, Pierre-Yves Martel and Gordon Allen. The series brings together musicians, often in whimsical combinations, and each one of the four organizers is responsible for one Tuesday per month. The musicians come from disparate musical worlds - jazz, musique actuelle, rock - but improvisation is the common thread, according to Allen. In the year since the series began, more than 100 musicians have taken part. This coming Tuesday, March 3, Mardi Spaghetti is marking its one-year anniversary with a party and a number of special events, including a reprise of Martel’s “toiletronics,” a performance from inside the washroom that sits beside Le Cagibi’s stage, and an improvisation in the alley by Allen. Allen, the trumpeter with the porkpie hat and crooked grin, has practically been a one-man scene-maker since arriving in Montréal from Guelph a couple of years ago, as he’s also one of the people behind L’Envers, the performance space at 185 Van Horne that’s been running since September. He’s proud of what Mardi Spaghetti has accomplished. “Because Mardi Spaghetti is happening every week, it’s in the back of people’s minds, so it’s now part of the fabric of the neighbourhood and that café,” Allen says. “It’s intimate, with a small stage, and the room has a particular feel to it. It’s like the back room, not the dungeon. Because of the big windows, there’s a view from the street, and people stop by and listen because of that. There was already a good level of activity in Montréal for improvised music, but this series has made the music more visible, quite literally.” 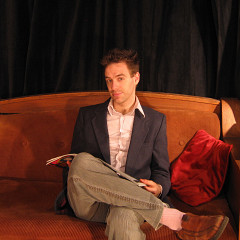 Ellwood Epps
There was already a good level of activity in Montréal for improvised music, but this series has made the music more visible, quite literally.