Denis Smalley is a composer of electroaccoustic music, active since the beginning of the 70’s, and currently head of the music department at the City University of London. The biogaphy that comes in this CD’s long booklet states that he has worked on numerous sonic experiments and has written several books on the aesthetic of electroaccoustic music.

This CD, released by the Canadian electroaccoustic label empreintes DIGITALes, is full of very abstract sound, of small sounds, of silence and of weird melodies. Clearly, this is music for people into both electroaccoustic and music theory. What can I write, then, that wouldn’t be a blatant insult at the academic work supporting this CD? Each part of this CD is focused on one primal material as source of sounds and as concept for the track. Then, sounds are recorded during processes in which the chosen material (metals, for example, for the first track) have a prominant place. Finally, electroaccoustic takes the relay, and you get, in the end, long track with a lot of silence and outbursts of tones and textures.

From my point of view, which is the one of somebody who hasn’t taken any class about electroaccoustic music, this CD relates strangely to some works of ambient artists present in the industrial scene. The ample aspect of this sound, the use of silences, the aquatic sound (on the two Tides tracks), a lot of atmospheres to be found here reminded me of some bands playing ambient industrial, like Ultra Milkmaids.

But then, this is also really music for scholars and I might miss the point totally. I would say that this isn’t an unpleasant record, but it really doesn’t correspond to the things I’m used to. Sources/scènes is probably a mandatory CD for Denis Smalley’s students and for fans of electroaccoustics, but the others should give the disc a try before betting that they will understand this music. 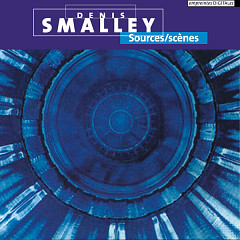 Sources / scènes
… full of very abstract sound, of small sounds, of silence and of weird melodies.