The 45th release from Montréal’s bastion electroacoustic label, empreintes DIGITALes, is a collection of works produced between 1994 and 1997 by the Montréal composer and radio producer, Daniel Leduc. Mr. Leduc has worked extensively in the medium of radio, a fact that helps explain his penchant for the voice as the primary sound source in most of the works included in this compilation. The first, the intriguingly titled Réponse impressioniste donnée par Josef K. lors d’une fin de soirée hivernale à une touriste française qui passait en face de la gare (Impressionistic answer given by Josef K. to a French tourist walking by the railway station at the end of a winter’s evening), may have the longest title but is the shortest piece. Réponse impressioniste is an “electroclip,” which introduces the listener to the fundamental sonic and gestural world that Mr. Leduc has gleaned from the François Bayle/Michel Chion legacy of acousmatic composition: the predominance of the voice as both semantic and sonic subject and object, either unadulterated or highly modified and processed; ringing quasi-inharmonic drones which encompass the sound stage and serve a structurally unifying function; a variety of sound materials drawn from natural sonic environments including, in this instance, wind and passing trains; and the sometimes bombastic entrances of punctuating, climax-building synthetic materials, raw, rough, and vibrant in contrast to neighboring sounds.

Réponse impressioniste, in addition to providing an initial summary of Mr. Leduc’s sonic world, proves an appropriate thematic opening for the disc which includes the 42-minute opus, Die Winterreise (Winter Journey), from 1997. In this extended composition, the composer sets the original German poems by Wilhelm Müller (1794-1827) as a suite of 24 electroacoustic miniatures plus a coda, each ranging from 30 sec to 3 min in length. (Yes, these are the same poems Franz Schubert set in his song cycle of the same name in 1827!) The text is wonderfully recited by the actor Erwin Potitt and is provided in its entirety in German, French, and English in the CD booklet for reference.

One has several compositional choices available when approaching a work employing text and voice, especially when the words elicit such potent visual images and are of such sonic richness on their own: establish and maintain a distinct sound and space for the voice and for the accompanying materials such that they are parallel but nonintegrated; integrate the voice materials into the timbral and metaphorical workings of the composition such that sound and sense achieve equal status; or — a hybrid of these two approaches — provide an accompanying “soundtrack” to extend and illustrate the words and semantic content of the text while keeping it the focus of attention in the forefront of the sonic image. Mr. Leduc chooses, for the most part, the latter option. He investigates several approaches to the vocal setting of the Müller text, including clear, unencumbered recitation, degrees of parallel signal processing of the voice that oscillate between accompanying and replacing the original vocal recording, and a more exaggerated and fragmented presentation. Despite these variations of approach, the vocal element is always maintained as the motivating agent in the piece, thus remaining faithful to the time-honored tradition of the lied as championed by Schubert.

A ringing, bell-like vocal sound (a recognizable offspring of the GRM’s Syter system) serves throughout the work as a unifying element, a refrain which haunts the speaker of the poems and accompanies the diverse collection of natural sound materials which populate and attempt to give dimension to Müller’s poignant and often desolate images. The short pieces that make up this substantial work run seamlessly from one to the next in a successful pacing of vocal declamation, interjected non-vocal materials, and more extended electroacoustic interludes.

The piece utilizes an ample assortment of recognizable wintry sounds such as the wailing winds, snow-crunching footsteps, and jingling bells that make up the first poem, Gute Nacht (Good Night). The sound world becomes immediately more diverse and evocative in the succeeding poems, Die Wetterfahne (The Weathervane), Defrorne Tränen (Frozen Tears) and Erstarrung (Numbness). While an incessant string timbre and a vivid, chattering, high-frequency texture propel Der Lindenbaum (The Linden Tree) and Wasserflut (Flood) respectively forward, Auf dem flusse (On the River) is illustrated simply with running water and the return of the ringing, bell-like refrain. Speed-varied voices and traffic sounds harry the voice in Rückblick (Looking Back), while a raging fire and rapidly moving filtered white noise provide a backdrop for Irrlicht (Will-o’-the-wisp).

A curious, noisy, orchestra-like interlude introduces Rast (Rest) and brings to the fore the most predominant electroacoustic timbre in the piece, a high frequency noise that seems an appropriately illustrative element for a winter topic. It is, though, overused in this long work. Frühlingstraum (Dreams of Spring) stands out as one of the work’s most successful segments in terms of both illustrative measures and vocal integration. The voice is tracked with a parallel stream of chattering vocal fragments while the sound stage is filled with a joyous din of cymbals and whirling synthesizer drones. Waves of filtered noise return as a staple of the sound world in Eisamkeit (Solitude) and Die Post (The Post), as does the parallel voice-tracking in Der Greise Kopf (The Grey Head) and Die Krähe (The Crow), where it is complemented by the more-than-obvious use of cawing and chirping birds.

The final segments of the cycle begin to grasp at ways of supporting the voice: the descending tom-tom solo at the end of Letzte Hoffnung (Last Hope) as an illustration of falling; the honking and baying cacophony in Im Dorfe (In the Village); the crackling storm of Der Stürmische Morgen (The Stormy Morning); the punctuation of a passing airplane in Täuschung (Illusion); the still unaltered bell-like refrain in Der Wegweiser (The Sign Post); more snow-crunching feet and tolling of bells in Das Wirthaus (The Inn); reversed, distorted, and tolling bells, as well as a distant church organ hymn in Mut! (Courage!); telephone push buttons, busy signals, and answering machine bleeps in Die Nebensonnen (The Phantom Suns); and finally, an out-of-tune plucked instrument and reversed versions of the same in Der Leiermann (The Hurdy-Gurdy Man). The minute-long coda is a bewildering final touch to this lengthy opus with its initial outburst of breaking glass followed by footsteps (now on a wooden surface) moving off into the distance and the roar of a motorcycle, the latter two sounds accompanied by the twittering of a music box melody.

Mr. Leduc shoulders a huge challenge in setting this quantity of text and image in the context of an electroacoustic work. His decision to concentrate on the vocal recitation and to provide simple electroacoustic illustrations in support of the text succeeds in many instances but not in sustaining the grand span and depth of the original poems. The piece is ultimately radiophonic in nature and origin and would unlikely be as suitable for an acousmatic concert experience as for a hörspiel-type broadcast.

A second short electroclip, Traverser les grandes eaux (To cross the great waters), follows Die Winterreise and serves as both an interlude and a transition to the final extended work on the disc. Its droning string textures, rapidly panning metal rattles, wisps of wind, and aperiodic pulses of tonality provide a point of repose from the flanking works. A central swell of string pads, as well as the well-orchestrated entries of muffled voice and high string drone, contributes to this brief sonic essay’s convincing shape.

The concluding work on the disc is the most recent of Mr. Leduc’s creations to be presented. Troposphère, from 1997, is a suite of four pieces in “minimalist style,” lasting over 15 min. The objective is alluded to by the titles of the four pieces: Stratus, Cumulonimbus, Altocumulus and Cirrus. The music is “realized through a heuristic composition process by stratifying layers of sound.” Combining similar or dissimilar layers of sound is a standard process in many if not most types of electroacoustic music (from hard-core acousmatic works to electropop). The success of such an approach lies in both the possible implications of the materials used and the interplay that results between the coexisting sound streams, a result of either conscious design or haphazard chance. At times, the composer’s choice of materials fuses admirably into an engaging polyphony where time and timbre cavort and produce a meaningful texture, gesture, transformation, or punctuating event. But too often the layers of sound remain isolated from each other in terms of both gestural and timbral attributes and implications, leaving one with the sense of listening to improvising musicians who are oblivious to each other. There is an obvious attempt to produce programmatic textures and a sense of gravitational suspension in keeping with the tropospheric subject of the work. Unfortunately, these attempts are overly static and underdeveloped, lacking a sense of dialogue between or fusion of the contributing sound materials. The over-use of materials such as storm, rain, and high frequency noise, in combination with the chattering of hammers and the cliché of passing cars on wet pavement, simply does not create a sonic statement worthy of the title Cumulonimbus. The continued predominance of a thick band of noise and gurgling lo-fi sounds in Altocumulus, although briefly punctuated by a singular, large bell sound that gradually distorts in an interesting manner, does nothing to stem the impression of a gratuitous combination of materials. The fleeting entry of a soprano voice, intoning a melodic fragment amid a jumble of garrulous sounds reminiscent of analog sequencers circa 1975, seems an all-too-obvious and forced attempt to elevate the work into the ether in the penultimate moments of Cirrus.

There are no stunning, ear-melting timbres or moments of gestural ecstasy in Mr. Leduc’s work. He endeavors to create a type of hybrid sonic poetry where voice, natural sound, and processed or synthetic sound combine to buoy textual content or carry abstract compositional goals to fruition. The harvest is at times rich and promising, at other times wanting in depth and content. 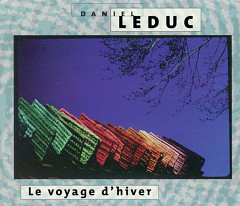